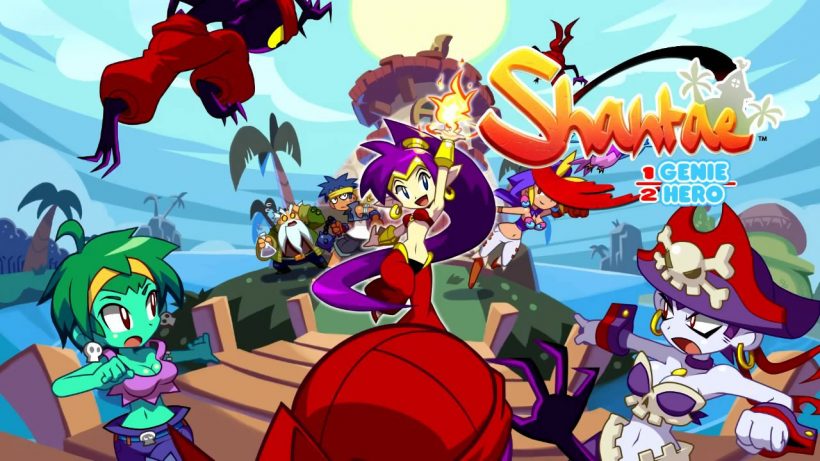 Not often will you see a comparison between a video game and the offspring of Will Smith (no, not the annoying son that can’t act), but Shantae: Half-Genie Hero and Willow Smith’s song both feature annoyingly catchy hooks and a lot of hair whipping.

Half-Genie Hero is the fourth entry in the Shantae series and, like the previous games, sees the titular protagonist tasked with defending Sequin Land (and her hometown Scuttle Town) from impending doom.

Having previously released on other platforms following a successful KickStarter campaign at the back end of last year, WayForward have now released their colourful platformer on the Nintendo Switch – but is the experience a magical one, or will you wish you hadn’t bothered?

The first things that strike you when you first start playing Half-Genie Hero are the game’s audio and fantastic visuals. Within minutes you will find yourself tapping away to the upbeat soundtrack, and even Shantae herself will join in if you leave her idle for a few seconds – the professional belly dancer swaying and shimmying to the funky music.

Dance and music play an even bigger part in this game, and Half-Genie Hero’s main mechanic is the ability to transform Shantae into many different animal forms in order to to help you traverse the six stages on offer. Using the X button to make Shantae dance, you can switch between these forms by using the analogue stick to select the one you wish to change into – ranging from a mermaid that enables you to explore underwater, to a monkey that allows you to jump higher and climb walls. These abilities are unlocked as you progress through the game, and in a Metroidvania-style fashion you will find yourself returning to previously visited areas to use your newly unlocked abilities – thus reaching areas that were inaccessible on your last pass. 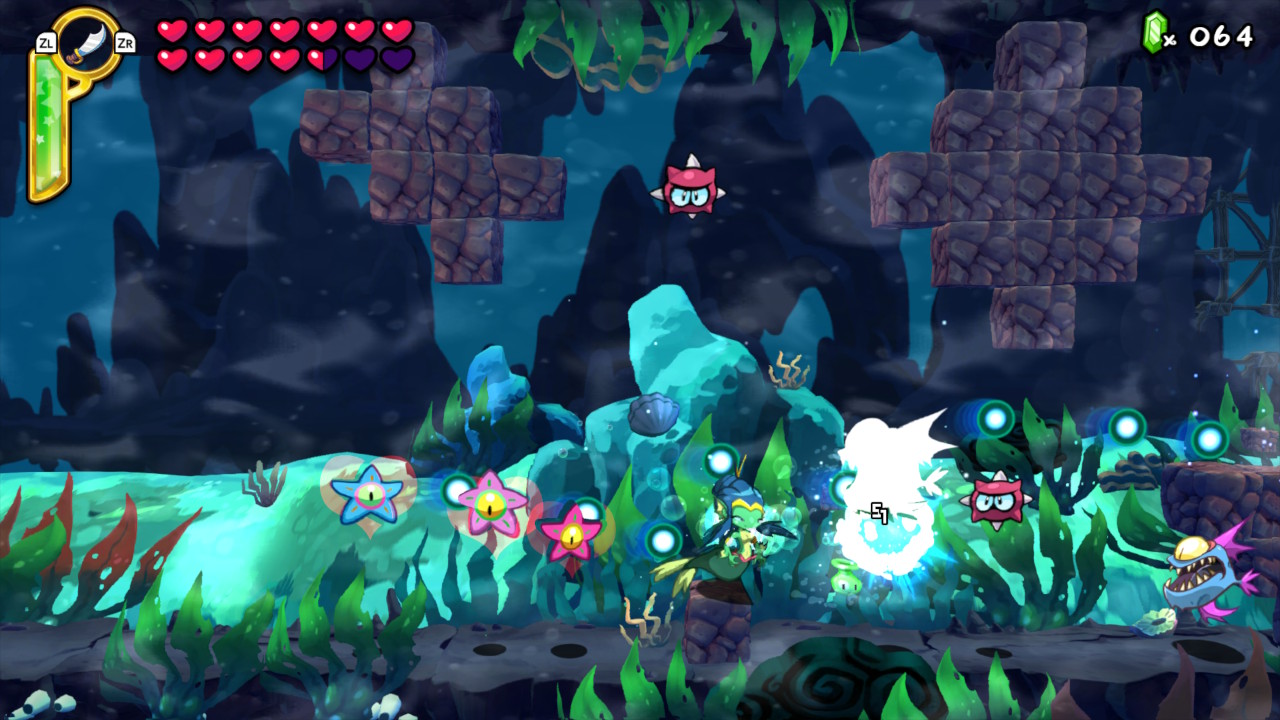 My only complaint about this constant to-ing and fro-ing is that, at times, I found myself scratching my head about where I needed to go next. The fact that there is a Bathhouse you can visit (located in the village hub area) to get hints on what to do/where to go next indicates that WayForward were aware this could be an issue, and the inclusion of this hint system in the game is a welcome one to save frustration.

This lack of direction is probably the most difficult part of the game. While a lot of recent 2D platformers have been a tad on the difficult side, Shantae: Half-Genie Hero is a bit too easy. Shantae has two main attacks; the first being the aforementioned hair whip which you can perform using the Y button, and the second being the use of a magic ability which is assigned to the B button – and can be switched on the fly (once new abilities have been acquired) using the ZL and ZR buttons. You will find that the majority of enemies in the game can be defeated with a few whips of Shantae’s purple locks, and even the bosses don’t offer too much of a challenge attack-wise. There is a Hard Core mode that offers extra difficulty however, and I would strongly recommend that you play through the game on this mode from the start – especially if you are after any sort of challenge from the enemies you encounter.

The platforming aspect is excellent. The game controls really well, which is needed and appreciated due to the precision jumps that you will need to make to ensure you do not fall to your death. Now don’t get me wrong, as it’s not all plain-sailing in this department – there are some areas (here’s looking at you Desert Tower) where you may feel hard done by if you mistime a jump right at the end and have to go back to the start of the area, but most of the time the game’s checkpoints can be quite forgiving if you do fail. Later on in the game you can use the transformations that you unlock to make traversing the levels (which are generally split into three areas) that much easier – with one of the many items/upgrades available to buy allowing you to jump direct to a specific area… if you know exactly where you need to be. 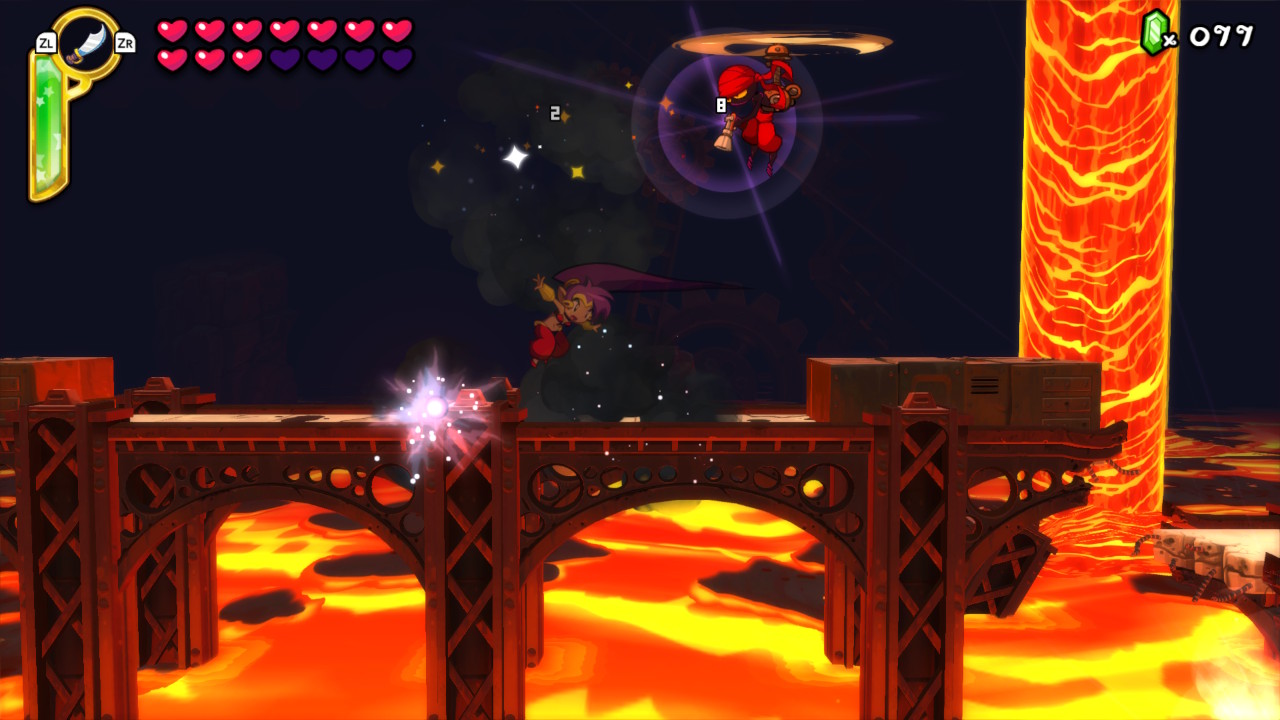 Shantae‘s story line is pretty simple, revolving around Sequin Land coming under attack from the series’ antagonist Risky Boots. As such, Shantae needs to travel all over the land to find the pieces required to build her uncle a machine to help repel the attacks. Finding the required items involves either beating an end of level boss or finding “x” amount of a certain item for one of the many NPCs that you will meet throughout your quest. The interactions between Shantae and these characters are mostly funny, charming, and occasionally fourth-wall breaking – adding to the overall fun vibe that the game exudes, and making for an enjoyable plot to get into for the six or so hours it will take you to beat the game.

My time with Shantae: Half-Genie Hero left me with mixed feelings. I’ve always been interested in the series, and it’s debut on the Nintendo Switch felt like the perfect time for me to jump in and see what it was all about. On one hand, the game’s length and the lack of challenge left me wanting and regretting that I didn’t pick Hard Core Mode from the off. On the other hand, the beautiful art, the design, the amazing soundtrack, and the engagingly funny story has certainly piqued my interest in the series. Although a little on the short side, Shantae: Half-Genie Hero is great fun from start to finish, and this belly-dancing hero is a perfect fit for the Nintendo Switch.

Now, if I could only find another famous genie to grant me some wishes; taking me back to before I started the game, and letting me start it fresh on Hard Core Mode…

Shantae: Half-Genie Hero is a beautiful, fun platformer that is a welcome addition to the Switch’s library. A little on the short side, the game does suffer from being too easy in its “normal” game mode. Still, if 2D platformers are your thing, you can’t go wrong with Half-Genie Hero, the titular belly-dancer will certainly have you tapping your feet to the beat – just make sure you play in Hard Core Mode if you like a challenge!