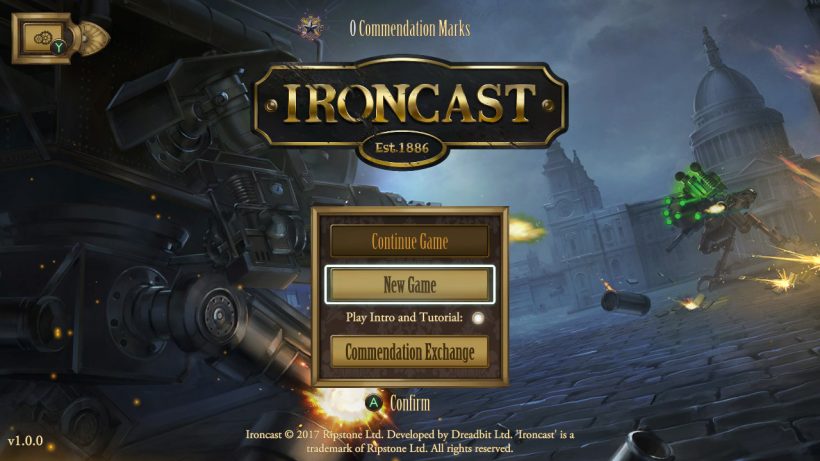 As the game industry grows, it becomes harder to make something unique and innovative within some genres – up to the point that when you hear about the newest iteration of a famous franchise, you already know exactly what to expect from it. This situation is even more extreme when you consider genres prominent on the mobile platforms, such as the match-three system. So, what is needed to make an overused genre new again? Ironcast answers that by adding RPG and roguelike elements to the match-three formula.

Before we take a look at how this strange formula works, the first thing that really catches the eye when the player starts Ironcast is how interesting the game setting is. The player controls the commander of a mecha-like biped robot – the eponymous Ironcast – in a fictitious, Victorian steampunk version of the 19th century. It is your objective to help Britain in its war campaign against the French, and you do that by taking missions that generally revolve around engaging in combat with other Ironcasts. 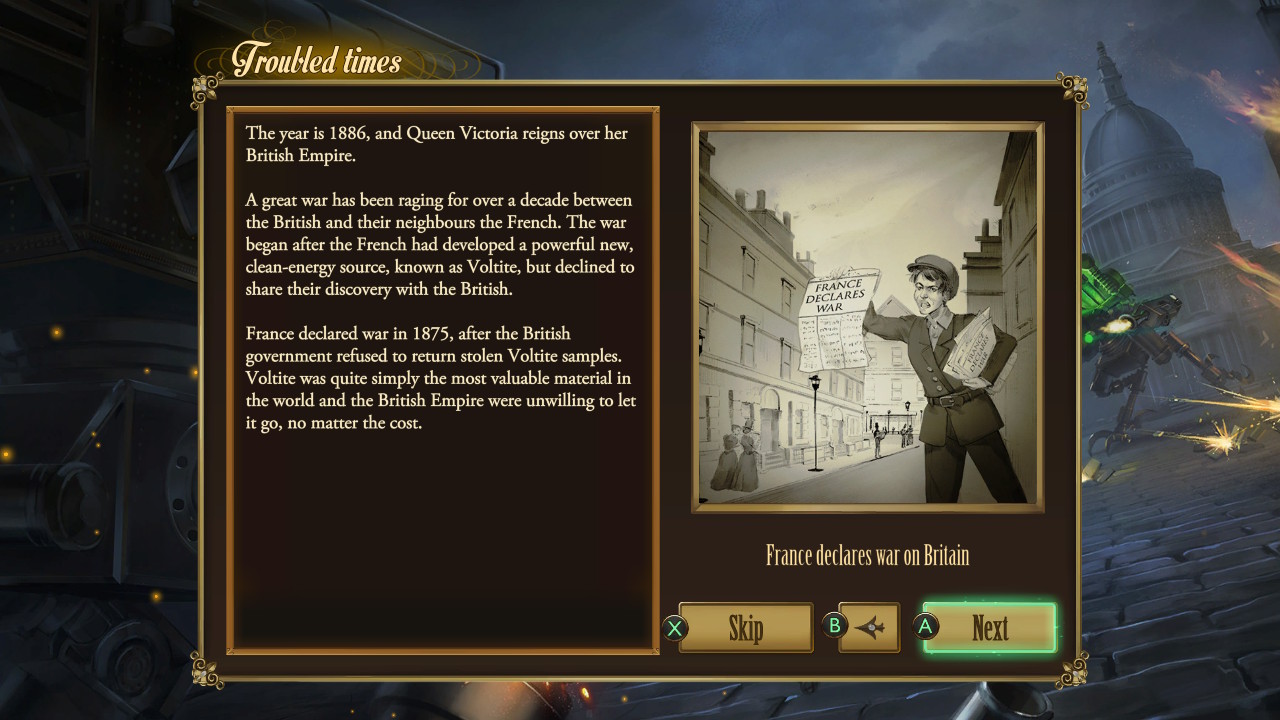 The campaign follows a very similar structure to the indie hit FTL – Faster Than Light, due to the fact that in each round the player can select between up to three missions – each with its own distinct difficulty, objective, and plot. Choosing the harder missions will reward you with more experience and resources, which can be used to upgrade your Ironcast. Nevertheless, risk must be carefully calculated because – as in FTL, – Ironcast has permadeath. If you die in a mission you will lose almost (we’ll get to that later) all of your progress, and will then have to restart the campaign from ground zero!

As you may guess, this permadeath system can be a hindrance for some players, but Ironcast makes this more bearable thanks to its enjoyable combat system. After the mission briefing – which determines if you must destroy your enemy, survive a set number of turns, or gather resources – you get into the full glory of Ironcast’s twisted match-three turn-based combat. At each turn you can perform as many actions as you wish, but only if you have enough resources to do so. Each Ironcast (both yours and your enemies’) has many subsystems built in – such as weapons, shields, a drive system, and a cooler. It is here that the match-three system comes into play. Twice per turn you must match gems of a set color in order to gather resources to power up each system; purple nodes are ammo for your weapons, yellow nodes power up your defense systems, and so on.

This may be seen as a very complex and perhaps even difficult approach to a turn-based system. Surprisingly however, it perfectly suits the game’s main theme. During combat, you really feel as if you’re controlling an intricate machine. It is not only important to get resources for the system you’re wanting to use at any one moment, but there are many interchanges between all the systems that will force you to improvise and think differently. It is also encouraged by the match-three system itself, as you often will be in a situation where you won’t have the required resources for the desired subsystem.

In order to control this behemoth of a machine, Ironcast does a competent job by mapping each subsystem to a button. For instance, the two weapons are activated by using L and ZL, the drives with R, and the shields with ZR. Other unlockable skills can be activated with the directional buttons, and you select the nodes from the match-three stage using the left stick and A. However, from the time I spent with the game, I must say that the optimal control option has to be the touch controls. The entire game is designed to be played with touch controls, and the make the game easier, faster, and more comfortable option in my humble opinion.

Combat aside, Ironcast has deeper roots when it comes to its RPG elements. In fact, each mission awards the player with resources such as money and experience points. Once you gather enough XP your Ironcast will level up – gaining more HP. Not only that, but you also can get skills, both passive and active, to use in combat. There are slots for these on each of the subsystems, as well as slots for your pilot and mecha. Therefore, you can focus on making your entire Ironcast bulky, or get a sizable improvement on your main weapon. 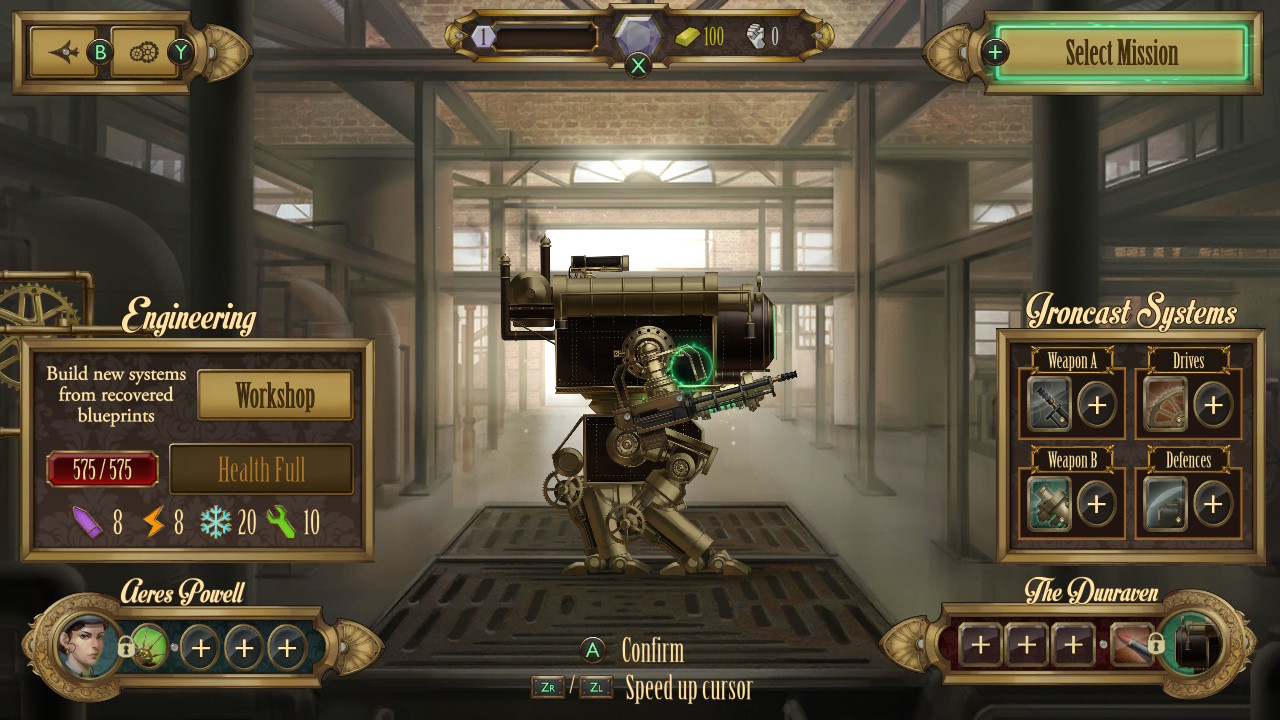 Money has different uses within the game. First, you will want to have a constant reserve of cash to be able to repair your Ironcast after a difficult encounter. There are many other ways to spend your money though. After each battle, you may get blueprints for the pieces your enemies were using, and you can rebuild those for your own use by spending your hard-earned dosh. The success or failure of your next mission may depend on those improvements, so it is always a hard choice to be made. After all, you don’t want to lose almost all your progress.

I say ‘almost’ all your progress because Ironcast does have a smaller persistent feature to be improved between campaigns. Each time the player gets a “game over,” commendation points will be given depending on the progress on that run. Not only that but sometimes you may see a special gem on the match-three stage that also awards you with these points. On the main menu, you can unlock new pilots, Ironcasts, skills and improvements for the upcoming campaigns. It is a very cool feature that add some value to your spent time and improves your odds of survival during each new run. 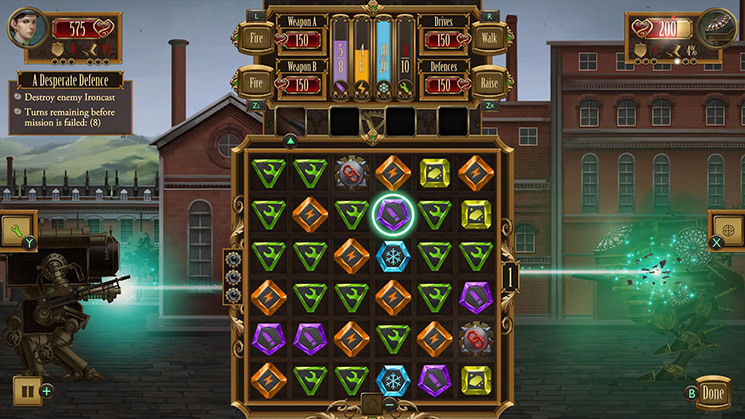 I can’t close my review without giving a small nod to Ironcast visuals. All the characters and backgrounds are beautifully presented in a stylish 2D art style, and – even if it isn’t really the main focus of the game – the steam machines are well-animated too. There’s very little to pick on presentation wise, and I think anyone picking it up will be pleasantly surprised.

Generally speaking, the game as a whole may not be as impactful as the shots from your machine, but it is certainly enjoyable and fun while it lasts. Add to that the good use of Switch’s HD humble feature, and in the end Ironcast may feel like the experiment of a crazy scientist. It’s as if someone threw the many ingredients included here into a gigantic cauldron, mixing us up a combination of RPG, turn-based strategy, roguelike, and match-three (among other hints and spices). Fortunately, the result was not an ambulant freak show, but a game that is definitely better than the sum of its parts. Due to its permadeath system and difficulty, it may try the player’s patience – but it’ll be a fun and enjoyable experience once you’ve gotten the hang of it.

With Ironcast, Dreadbit mixes up some elements from other genres to make a match-three that is both entertaining and complex. Its permadeath system may hinder the experience for some players, but lots of fun will be reserved for those who persist.

One thought on “Ironcast Review”