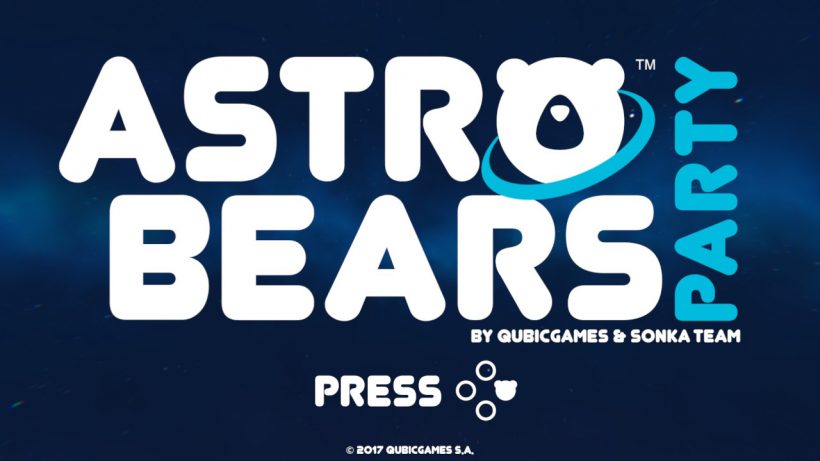 Astro Bears Party is a competitive party game featuring cute, podgy bears in spacesuits who run around bumping into each other and catching fish. Oh… and one of them is called Neil. If that doesn’t immediately intrigue you then I don’t know what will! Published by Qubic Games (who have an incredible amount of Switch games on the way), Astro Bears Party is hoping to be your next go-to party game – and it may well have succeeded.

The game has both single and multiplayer offerings which each have different objectives. The former sees you running around a spherical, planet-like surface with the sole aim of catching Jetfish (fish with jets on… obviously). Each time you collect a Jetfish, your Magical Beary Ribbon (a damaging trail that is left behind you as you run, and possibly the best name for a video game item ever) grows in length, eventually becoming so long that it will wrap around the entire planet. It works in exactly the same way that Snake used to on old Nokia phones, except in a 3D environment… and with bears.  The difficulty increases as your Jetfish tally increases and your goal is to aim for the highest score possible. It’s very enjoyable and can be extremely addictive. The multiplayer mode is where the “party” element of the game really kicks in. Here, 2-4 players all run around the same globe with their Magical Beary Ribbons shooting out from behind them. If you touch the trail of any bear (including your own) you are knocked out – the last bear standing wins. The controls are exactly the same as those in the single player; move the left control stick around to move and press (A) to jump or hover in the air. Simply dodging and jumping over colourful lines is, of course, an extremely easy concept for anyone to pick up and, as a result, you are left with a game that is readily accessible to players of all abilities (and a whole lot of fun).

This mode also lets you change the amount of points needed to win, as well the size of the planet you want to play on which can dramatically change how tense a game can be. In addition to this, both modes allow you to choose different bears to play as, each with their own set of stats that affect their speed, jetpack capacity, turning speed, and so on. It is only a small game with an unfortunate lack of varying play-styles and modes, but it’s really nicely polished and the features it does have have been designed extremely well.

It looks and sounds great too – the visuals are really pretty, especially in things such as the bears’ animations, and the pumping soundtrack fits the party vibe. The controls are so effortlessly simple that a Joy-Con on its side is more than enough and, unlike when needed in the Switch’s bigger titles, is actually comfortable to use. Playing with any more than two players in Tabletop mode might be a struggle, though (just because the split screen would become almost impossible to see), so I’d recommend sticking to having everyone gathered around the TV.

A surprisingly impressive effort all round, then – Astro Bears Party offers a lot of laughs, some very tightly designed gameplay, and a really simple pick-up-and-play concept that is perfect for a small gathering of friends. The solo player experience is fun, but considering half of the game’s content is based around multiplayer action it is definitely more suited for those who like to play with others. If you’re looking for a new party game for your Switch, look no further than Neil and Co.

Astro Bears Party is one of those games that anyone can instantly pick up and have a laugh with. The game is really impressively designed with solid gameplay and lovely aesthetics – in fact, the only fault I can find is that I wish there were more modes to play. You won’t be playing it for hours on end, but that’s not the point – grab some friends, grab a Joy-Con, and have a great time.