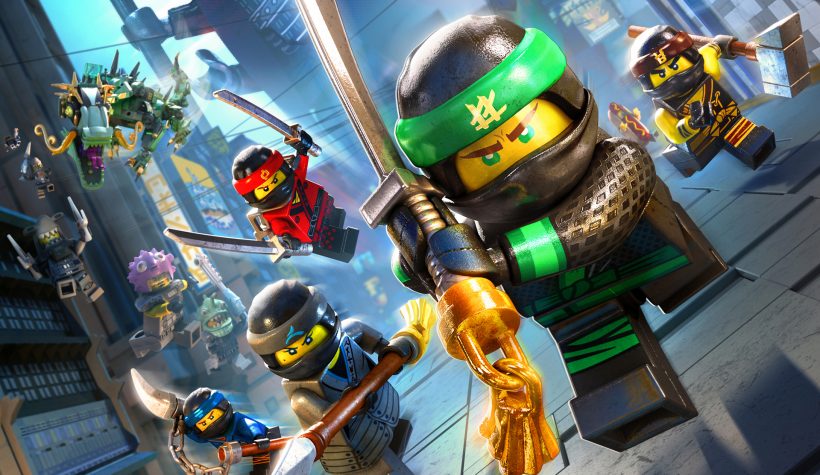 By now, you no doubt already know whether or not a new Lego game is going to be your cup of tea.  Lego: The Ninjago Movie Videogame does little to change this – but that’s okay… mostly.

Complimenting the latest in LEGO’s ever-increasing line of movies, Lego Ninjago pits players against the evil Lord Garmadon, who is intent on taking over the city of Ninjago with his hulking mechs and nefarious minions. The game largely follows the same plot as its movie counterpart, with cutscenes consisting of clips ripped straight from the film and additional scenes utilising the in-game engine. Unfortunately, whilst the cutscenes themselves are generally of a high quality (which, to be fair, they should be), it makes the game’s story feel rather disjointed. In the first couple of chapters, the chipper team of ninjas successfully defeat Lord Garmadon only for him to return with a vengeance in the chapter directly following. Diluting the film’s story into bite-size cutscenes gives little context to the gameplay itself and unfortunately makes the experience as a whole feel somewhat repetitive. 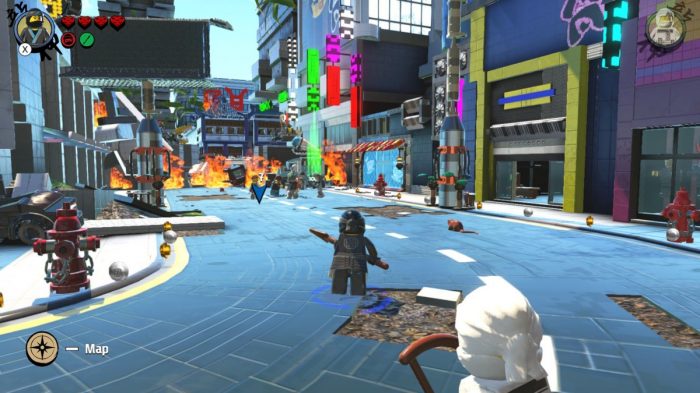 Thankfully, the gameplay itself is reasonably fun for the most part, and those familiar with the franchise will know exactly what to expect. You’re given the option to control one of up to five characters at any given time, with the ability to flip between them with a simple tap of the X button. Each character has particular strengths – for example, Kai is particularly adept at wielding two swords, whilst Zane is more at home with a bow and arrow – and you’ll need to use these abilities to overcome enemies and puzzles in order to progress. The puzzles themselves are shallow, admittedly, though it’s important to remember that these games are aimed primarily at children. Elsewhere, the game makes good use of the ninja theme by allowing you to run up and across certain walls or swing on ropes to access certain parts of the levels. These mechanics are pleasantly fluid for the most part, but missing the brief button prompts will frequently have you falling to the ground below. It happened to me more often than I care to admit, and it did become quite frustrating after a while. 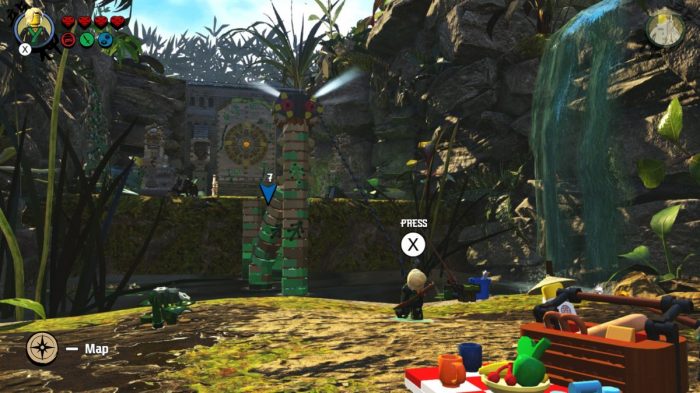 As this is a Ninjago game, combat, of course, plays quite a central role. You have six different attacks, and the game tries to nudge you into experimentation, although I must admit I fell into a comfortable routine of either dishing out a bunch of basic attacks or jumping and unleashing a homing attack on most enemies (if you’re familiar with the 3D Sonic titles, you can imagine how this works). It’s fun for the most part, but I would have appreciated a bit more of a challenge – I didn’t die once throughout my entire playthrough, which is kind of ridiculous. Nevertheless, it’s accessible enough to remain fun throughout, and the game also utilises a basic yet useful upgrade system to boost your attacks or allow you to gain more ‘studs’, the Lego world’s currency.

On the flip side, there are occasional on-rails sequences in which you are flying through the city of Ninjago on a giant mech dragon. These sections are, in a word, horrific. There is far too much going on at once and the game struggles to keep up, with the framerate dropping to completely unacceptable levels. Similarly, it’s difficult to actually make out the enemies amongst all the carnage – the screen is constantly filled with bright colours and explosions flinging Lego bricks in every direction, I struggled to make any sense of what I was seeing (you can take a glimpse at what I mean in the below screenshot). Thankfully, these sections are few and far between, but I would frankly rather not have them at all in this state, which is a shame. 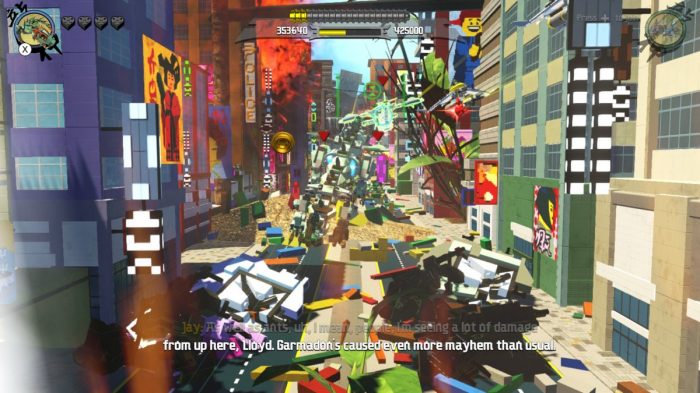 Sadly, the game struggles in a couple of other areas too. The loading times can be very lengthy at the best of times – in fact, there was one instance in which I thought the game had simply given up and crashed. I was about to hit the Home button and close the software before it finally loaded up the game. Similarly, the visuals occasionally stutter and tear, though this isn’t particularly prominent and, for the most part, shouldn’t affect the experience too much.

Much of this sounds rather negative, I know, but I must admit that despite the numerous issues, I did actually enjoy my time with this game. The gameplay itself doesn’t do much to deviate from the franchise norm, but that’s okay because it does works, and the humour was strong enough to keep me going throughout the campaign. I can’t wholeheartedly recommend it for the general gamer, but diehard LEGO fans will lap this up, and children? They will absolutely love it.

If you’re familiar with the Lego franchise, you’ll know exactly what you’re getting into here. Lego: The Ninjago Movie Videogame is a fun, accessible title marred with some bizarre design choices and some unfortunate technical issues. Nevertheless, it’d make a great present for the kids.