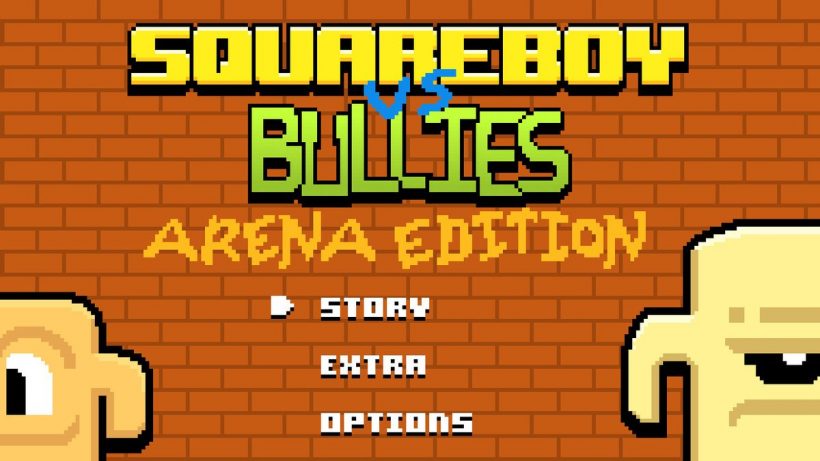 It’s difficult to decide whether Squareboy vs Bullies: Arena Edition is simple genius or overly minimalist.

This 2D beat-em-up features level after level of bullies trying to punch your head off your shoulders (not literally – it isn’t a graphic game.) From the plain standard bullies to the toughened-up mohawk bullies and the more dangerous gangster bullies – who can fire guns – the game offers challenge by intensity rather than complexity, as when five bullies are on the screen at the same time it’s easy to find yourself surrounded before taking a pummelling.

You have to be upfront – it’s a little basic.  Inspired by the beat-em-ups of old, the game has you take on the role of Squareboy, who takes on the lexically-challenged titular bullies, who you can tell are mean by the almost illegible daubed graffiti in the background of each level. It’s mostly spelt incorrectly, and it’s on the level of an “I woz here” inscription – it’s not going to offend someone, particularly if you’re thinking about this game as one that the kids can try.

But at the same time, more hardened players can learn the skills needed to pull off some more complicated fighting manoeuvres. You can hit the pause button to bring up a display of all the button combinations that you’ll need to hit in order to check off some of the main menu’s achievement challenges. While some of the attacks, including the dropkick and spin attack, are prettier than your basic arsenal of punching and kicking, the actual damage they deal out is only marginally more.

Every now and then you’ll come across a health pack which will nurse you all the way back to 100% – but make sure you clear a room of enemies before you use it, or you’ll likely be needing another sooner than you’d expect. Weapons and projectiles appear here and there – but make sure you’re standing directly in line with the enemies when you try to throw them, or they’ll sail sheepishly out of harm’s way.

A Co-op mode reduces the challenge of the main mode somewhat – you’d hope for double the number of baddies on the screen to compensate for the extra set of fists for punching, but I found it much more difficult to see the game over screen when I had a friend in tow.

As this is the Arena Edition, it features Arena mode – a mode where you head to any of the stages from the main campaign game, and take on an endless avalanche of enemies until you’re finally beaten into the ground. The game tots up every single enemy that you off and provides you with a final score, and if you meet or beat the target score, you’ll be allowed to try your hand at the next level.

It’s a shame that it all seems so repetitive. Each level, upon starting up (the load times are basically instant), has you wade into the centre of the room before waiting for the enemies to pile in from the left and right before proceeding to kick lumps out of them. While you can’t make it through just by spamming the punch button, you can defeat all the enemies using a tiny number of moves out of your moveset – a bit more variation is what this game needs.

While the morals that the game tries to tell are good ones – since when is kicking almighty lumps out of bullies not a good thing – it would have been nice to see a bit more complexity added to the arsenal of attacks. It feels like a game that a mobile device would be able to handle with no trouble – and the Switch needs to be above that level in order to sway families away from mobile gaming and back to a trusty console.