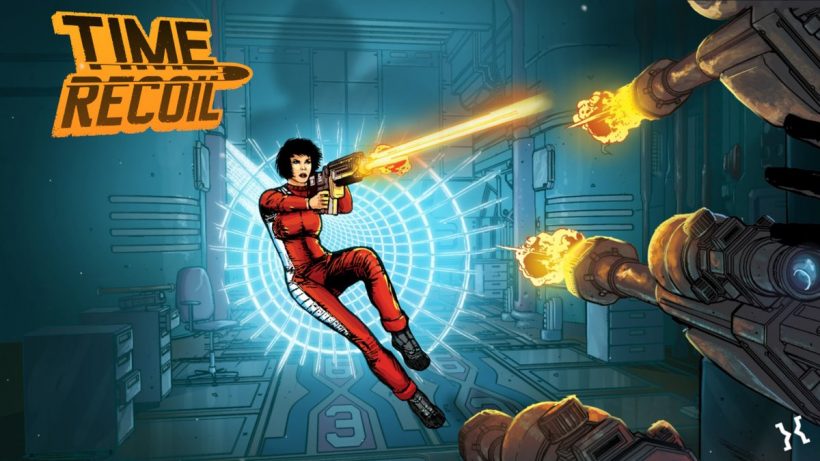 Time Recoil is a stylish top-down, roguelike shooter set in a series of buildings across a number of different time eras.

Armed with your usual options of weaponry – a handgun, an automatic, a shotgun and so on – most levels are set around negotiating your way across a floor or two of a building, popping off shots delicately in the direction of enemies. You’ll need to be careful about your aim and the number of bullets you fire off because ammo is limited but, fortunately, most enemies will only need to take a shot or two to be bumped off. You’ll need to use walls and doors for cover and then plot a path throughout the floor to reach your objective with as minimal a risk to your health as possible because if you take one hit, you’re a goner. The enemies are usually very accurate, and if you’re not careful, they’ll pop a bullet through you with aplomb.

That’s where the Time Recoil of the game comes into play. Basically, scientists discovered that our lady protagonist has an ability to slow down time, and does this when picking off enemies. Striking down one enemy sets this into motion, and then for a window of just a few moments, time will slow – allowing you to dodge enemy bullets and pick off even more before they have a chance to react. The more that you do manage to take out during the recoil, the higher a power of special move is allocated to you – these special moves are used by hitting the ZL button and can include electrical pulses which take out everyone within a limited radius in front of you, or smashing anyone in sight who’s on the other side of a thin wall.

If you’ve played Neurovoider already on the Switch eShop, this isn’t too dissimilar. The handling is the same – moving with the left stick and firing off shots while aiming with the right, but Time Recoil offers a more human element and has a better personality and story about it as a result.

Some levels ask you to kill all the enemies in sight, while others have you capturing characters while being careful not to shoot them by accident. That’s no mean feat, either – the action is all quick, and with the bullets spraying everywhere, it’s easy to get someone unintentionally caught in the crossfire – especially on levels where explosives are piled against every wall. Precision is key with every shot. But some quite gruesome blood effects see it spatter everywhere when either you or an enemy is struck, leading to a quite emphatic visual presentation.

Between levels, you’ll have a briefing from somebody in your home era of 1987. It’s here where the rapid load speeds of the Switch game cards come into play. The majority of levels end with you creating a wormhole to return back to your era, and then the switch from screen to screen is instantaneous. You’ll have two or three lines of story-driven dialogue from a relevant character, then you’re jumping back into the wormhole and you’re away again. It really is as quick as that, and it gives a real sense of speed to the game. There won’t be any moments where you’re sitting back waiting for the next bit of excitement to begin; you’re thrust back into the action almost as soon as you’ve left it.

Music is your usual roguelike fodder, a catchy tune playing on repeat in the background that you won’t really pay much notice to. Where Time Recoil excels though is in the storytelling and atmosphere – your home era does manage to feel like home in just a short amount of time, and that makes it effective when – spoiler alert – its sanctity comes under threat a short way into the game.

At £11.99 or $13.99, Time Recoil is decent value for money – you’ll get plenty of replay value out of it both with its achievement targets and simply working through each level in as quick a time as possible.

Time Recoil is a quick-paced, enjoyable shooter-come-puzzler, which has plenty to keep players entertained. It’s not quite a unique entity in the Switch eShop, which has a number of other games from the same genre, but it’s definitely worth a play if you’ve got the funds for it.

One thought on “Time Recoil Review”