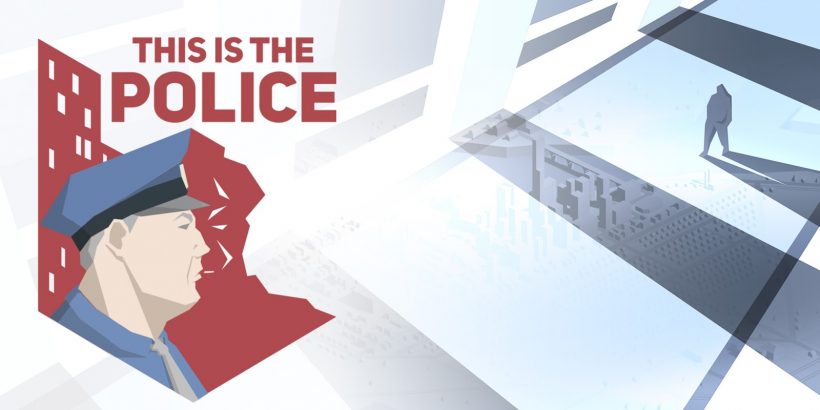 This Is The Police lands you in the nostalgia of the 80’s, exposed to numerous detective TV shows and movies which carried a recurring theme throughout them. Smokey, dark offices filled with deeply flawed characters who “just want to do the right thing”. This time, though, you’re seeing the world through the eyes of Jack Boyd, Freeburg’s Chief of Police and our anti-hero.

As the game launches you’re treated to a cutscene styled in a way that is similar to the polygonal style of Another World. Jack Boyd is lamenting about his career as the Freeburg Chief of Police as he finds out that he has 90 days left before he is removed from his job. This gives you everything that you initially need to know to get going. Jack’s decided that he’s had enough and wants to make sure that he walks away with a nest egg. This is the story in a nutshell. Have half a million in the bank at the end of 30 days. The game starts proper with the city represented as a scale model in Jack’s office; the police station placed firmly in the centre. You’re gently guided into how you deploy your officers to crimes and everything seems hunky-dory.

The model of the city is simple yet gorgeous. At the start of the day you see the shutters in your office rise up and cast sunshine over the city. Lights flicker through the evening and weather makes subtle changes to the mood as the day progresses until it’s night time. Each day in the game is made up of watching this model and sending officers to each incident. The outcomes depending on their experience and how many you dispatch. You need to carefully juggle your officers with the number of calls that you have and think you’re going to receive. The worst feeling in the game is having your entire force deployed when something serious kicks off. You watch powerlessly as the clock ticks away.

The second main task of the day is to send detectives to investigate crimes. These are some of my favourite parts of the game. You send detectives to and they come back with a storyboard, gradually adding more pictures. It’s like being in primary school and learning how to get dressed by placing the pictures in the correct order. You need to use the witnesses statements and hope that your investigators have found all of the necessary pictures. Get it right and the crime is solved. It’s gratifying to actually solve something rather than just getting reports back from your officers.

Much like in any good HBO drama, the story escalates rapidly and this is where the real challenge of the game comes in. Before you have finished a week in the job you’re embroiled with the mafia and trying to bring down criminal gangs. You have to think about how to tackle these demands on your department. You’re the thin blue line between order and chaos and you’re walking a constant tightrope. At least, that’s how it feels in the beginning.

You find yourself weighing up how ethical the demands are. Do you take an easy bit of cash for providing some security?  Do you turn a blind eye to a crime and earn some extra coin? Or do you simply keep to your principles and try and hit your targets to make the money you need? At first, the questions feel like you’re setting yourself up to be the character you expect throughout the game. Then you get forced into a corner when the mayor’s office makes demands that – initially – seem quite unsettling. For instance, being asked to fire all members of your force of a particular ethnicity.

This is where the strategy aspect of the game becomes a little lacking. If you don’t comply with these demands you get lambasted by the mayor’s office for failing to serve the public and lose funding, yet if you do comply you leave yourself short of staff and are unable to cover the crimes taking place. Unfortunately, you have no real sense of how you are performing. In a game such as Sim City, you have advisers telling you how you’re performing in different areas of your mayorship whereas in This Is The Police your only feedback is complaints from the mayor’s office or daily headlines which may or may not reflect what you’re doing.

The narrative picks up between days where events take place in the form of cutscenes. Boyd is reluctantly chatting to the kingpin or the mayor is busting you among other stories. It’s the feel of downbeat 80’s detective shows with modern machinations and politics of TV shows such as The Wire or The Shield woven throughout. The voice talents of Duke Nukem’s Jon St John authenticity and gravitas to these scenes and I applaud THQ Nordic for putting the effort in.

There comes a time in the game when you start to feel like you’re going through the motions, questioning if anything you do really makes a difference the Freeburg at all. Your moral quandaries are replaced with just trying to meet targets despite being reigned in on occasion.

This Is The Police is a challenging, strategic planning game with plenty to keep your interest. I would have liked to have seen my moral choices challenged or rewarded more, but on reflection, maybe my increasingly despondent feelings about Boyd’s problems just mirror the journey he’s taking too. That’s quite possibly the lesson in all of this after all.

This Is The Police takes the running of a police force and turns it into a strategic, management game with light RPG elements. You won’t see any action here and the unreasonable, random demands made can be frustrating. However, throughout all of this, there is a narrative and a goal that can keep you engaged and entertained for many hours.