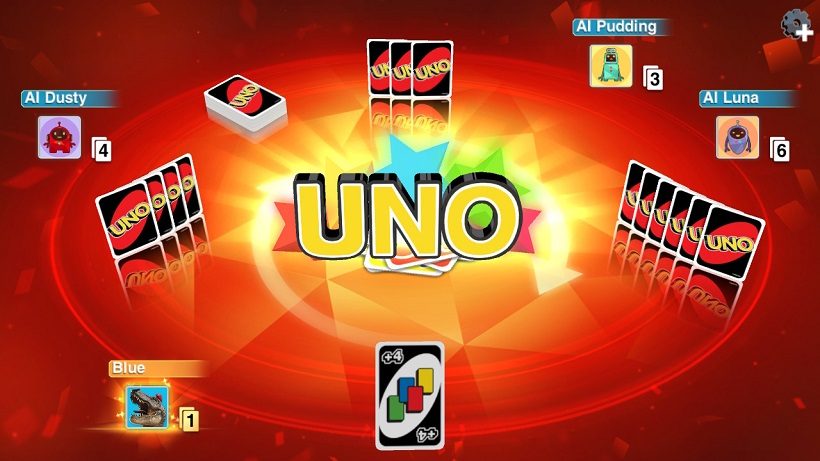 Not the strongest of hands, but certainly a winning one.

UNO is the latest family game brought to the Switch by Ubisoft. The renowned card game has been recreated in video game form before, most notably the fondly remembered Xbox Live Arcade version, but does Ubisoft do enough to differentiate this new Switch version from its forbearer?

The main element distinguishing Ubisoft’s version of UNO is the inclusion of themed card decks from the developer’s franchises including; Rabbids, Rayman, and Just Dance. These don’t just provide aesthetic changes, as they also bring with them four special cards for each pack that alter the game in a unique way when played. Some are more impactful than others, ranging from copying the card previously played to a Rabbid running around threatening to punish you if you don’t play a card in two seconds. It’s worth mentioning that these special cards are completely optional, but they are rare in play and complement the experience in a way that feels at home with the core experience. 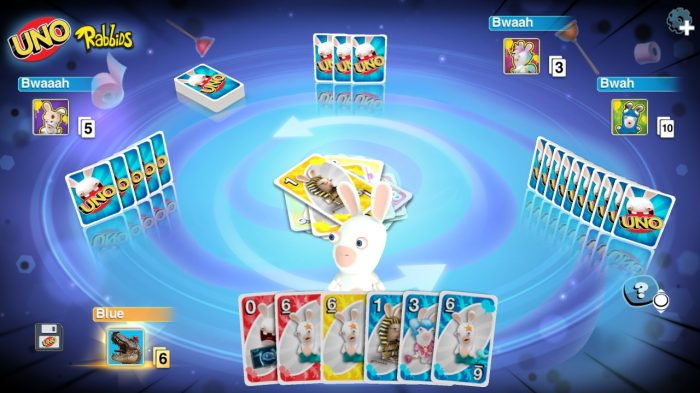 The vanilla version of UNO is still playable and performs as it should, just like the real card game. House rules are also supported, although limited, there are enough to choose from that you can mix and match; if you want any that is. The versatility available allows you to play how you want to, or just experiment, meaning that the base game doesn’t risk getting overly familiar too quickly.

Unlike the card game, the video game version of UNO has a significant advantage, that being you don’t need other people to play a full game. Whilst the social element can contribute to the experience, the core game provides a strong enough hook that it works despite this. Of course, if you want to play with a real human, the option exists. Local multiplayer is fully supported, helped by complete control mapping to a single Joy-Con, but then there is the issue of being able to see each other’s hand. Online multiplayer is also available and works exactly as it should, unfortunately not everyone you meet will have the attention span for a whole game. Thankfully Ubisoft foresaw this and replaces those who leave with a bot so that the game can continue. 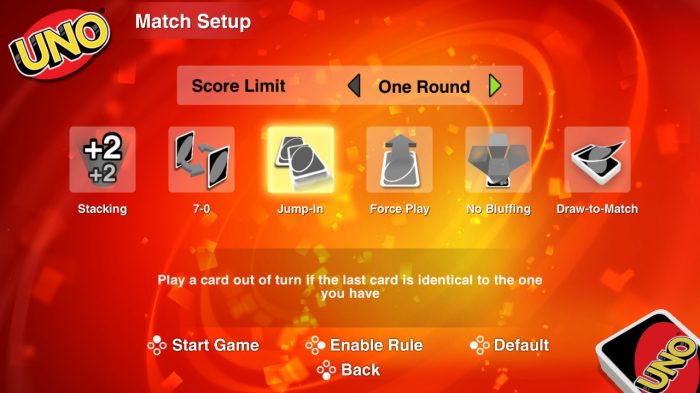 Like Ubisoft’s other recent Switch game, Monopoly, UNO also suffers from an issue that causes the game to take an incredibly long time to load. Both games can be corrected by restarting the Switch, but how this bypassed QA for both games is concerning. Aside from this initial error, UNO runs along as quickly as a game using the physical cards.

Whilst docked, UNO runs flawlessly and works with a range of different control methods that the Switch has to offer. Handheld mode is worth considering though, as the Switch’s portability is what makes it the biggest contender as a replacement of the card game. Again, a range of control inputs are supported, but the prominent difference is that the game can be controlled via the touchscreen. It’s a shame then that the touch controls feel like they would be more at home on the 3DS touchscreen than the multitouch functionality of the Switch display. Whilst functional you’ll soon find yourself reverting to button controls. With the very welcome addition of themed card decks – featuring Ubisoft characters – providing an additional flourish to the game, UNO for Switch is a digital recreation of the popular card game, which is all you can ask for.