Publisher 10tons returns with yet another Switch release under its belt, this time in the form of quirky puzzle title Tennis in the Face. Straight from the start, with its absurd premise and offbeat culture references, it’s clear that this is a title that does not take itself too seriously. But does it serve up an ace? Let’s find out… 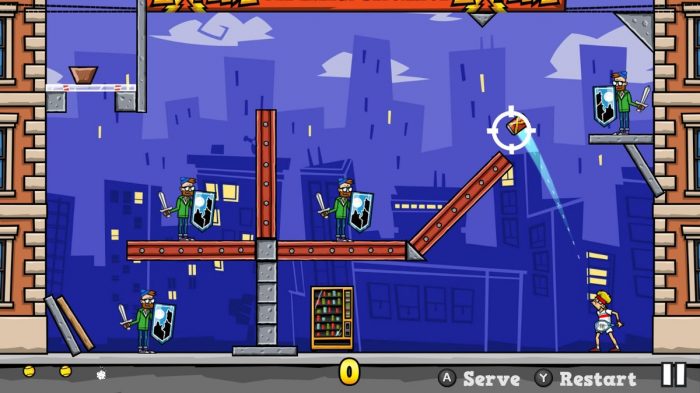 An evil energy drink corporation known as ‘Explodz’ has taken over the city, and it’s up to sportsman Pete Pagassi to stop them in the only way he knows how – by lobbing tennis balls at their employees and affiliates. The entire game centres on this premise and is basically – look, let’s not mince our words here – a blatant rip off of the Angry Birds franchise. Each level comprises of a selection of bad guys dotted around the screen and it’s up to you to to utilise the environments to take out all of them in as few hits as possible.

Perhaps the only thing remotely unique about Tennis in the Face is the ability to ricochet your tennis balls around the levels, encouraging creative ways to solve the puzzle at hand. Indeed, it’s very possible to clear most levels in a single shot if you manage to hit that sweet spot. Some aspects of the environment actually lend you a helping hand, too. There may be a crate of dynamite lying right next to an enemy just waiting to explode on command, or there might be a wooden plank perched precariously on the edge of a platform, right over the head of another goon – very handy. 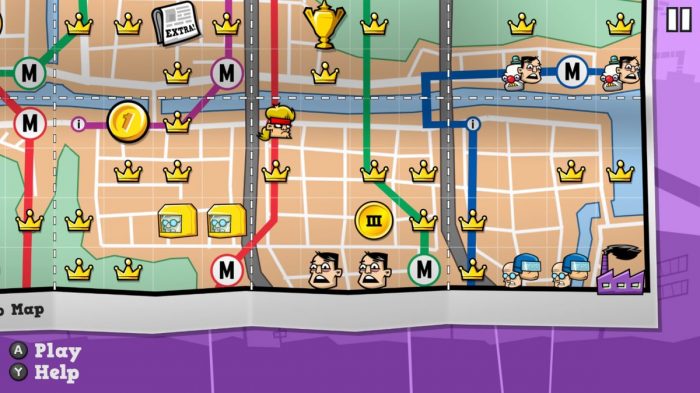 As you progress, the levels naturally increase in their complexity, as do your opponents: you start off facing some pretty basic clown characters who just love to quote The Joker from Nolan’s The Dark Knight, then some riot police who equip shields, making attacking either their heads or backsides your only option. There’s also some stockholders, scientists in hazmat suits and eventually a mixture of all and sunder as you near the end of the game.

Speaking of the end of the game, I reached the credits in less than an hour. There are admittedly some bonus stages that I initially skipped over, but after going back and rinsing the rest of the game, it added close to an extra half hour onto my overall completion time. 10tons is not asking for a lot of your cash for Tennis in the Face, but I definitely feel like there should be a lot more content here – just as I was starting to enjoy myself and feel that addictive pull, it was all over. What a waste. 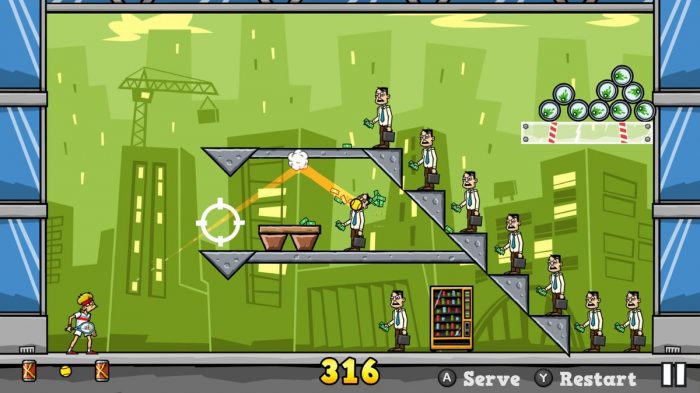 It’s not all doom and gloom though. The visuals are pretty basic but serviceable enough, and although the characters aren’t particularly original in design, the overall aesthetic is fairly decent. Similarly, the music is very catchy, although I would’ve like a bit more variety – there’s maybe two or three tracks that are repeated throughout the entire experience.

All in all, Tennis in the Face is not a bad game at all – I had fun in my short time with it. It just completely lacks any originality. It’s as if the developers looked at the entire package – the visuals, the music, the gameplay, the length – and said “it’ll do”.

Tennis in the Face is a good game heavily stifled by borrowed ideas and an insultingly short length. Its cheap price may entice you to pick it up in between bigger releases, but at the rate the Switch’s eShop is expanding, you’re best off saving your pennies for something more worthwhile.