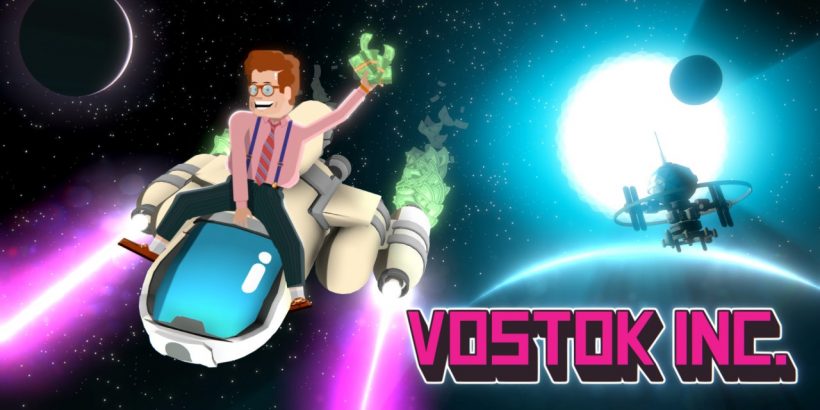 Vostok Inc., from Nosebleed Interactive is described as “The World’s First Twin-Stick Action Arcade Clicker”, combining both arcade space shooting with the Cookie Clicker style browser games that we all have at some point poured time into. By providing a fast-paced traditional game element (alongside plenty of depth and strategy) in spaceship based exploration, It breaks up the monotony of what otherwise could be simplified into an App or Tablet game. I really enjoyed it.

Starting off on Earth before warping into increasingly colourful and fictional waters, Vostok Inc. has you travelling from planet to planet, constructing increasingly extravagant buildings to make as much profit as possible. Your assistant Jimmy, the poster boy for the game, is the extraterrestrial equivalent of Foggy Nelson, Often rubbing the myriad of different alien races up the wrong way. This results in, shall we say, ‘aggressive negotiations’. With endless upgrades, a music mixer, bonus systems and built in achievements (something Nintendo have yet to address on the Switch platform as a whole), there is plenty to get stuck into here.

Admittedly, my initial reactions to the twin-stick arcade gameplay were negative, due entirely down to the awful weapon accuracy on the pea shooter you begin with. I can understand why they chose this, as the whole point of the game is upgrading and growing, but the recoil on the weapon makes the first few fights no fun at all for me. Something felt off. Luckily the weapon variety makes up for this in the long run, with the 3 upgradeable weapon slots offering tons of different combinations. Examples include a massive lightsaber, and even a gun that shoots out unicorns.

The amount of polish and attention to detail that has gone into Vostok Inc. is a large part of what makes it such a satisfying game to play. The most impressive extra feature is a fully in-built, almost Tamagotchi-like system in which you harbour executives on your ship to get multipliers and bonuses. By keeping them happy with ‘gifts’ (Sushi, Martinis and Private Jets), you get to enjoy small mini-games, some of which are full on games within the menus. My personal favourites are ‘Space Laser’ (as shown) and ‘Tapeworm’: a Snake clone.

An interesting dichotomy between gameplay styles is presented in Vostok Inc. No matter how you want to approach the game, be it mindlessly blasting enemies or genuinely planning out buildings for each planet to maximise profit, you are always contributing to your ultimate goal: making that sweet sweet cash. It’s the same sensation you get with a simple mobile game, where 5 minutes can turn into 5 hours, although the depth in features makes it a serious contender on the eShop to scratch that space shooter itch. The Switch hardware plays perfectly into this, as you can play it during a commute in handheld mode or dock up (much like your spaceship) to upgrade for a big, bullet-hell boss battle.

Vostok Inc. takes the cookie clicker genre, often played with a fleeting attention span, and spins it into an experience that you can’t put down. The amount of different spinning plates to consider when constructing your capitalist, galactic empire is a challenge that is only made more satisfying by the pleasing music, graphics and varying space combat. It’s a great game.