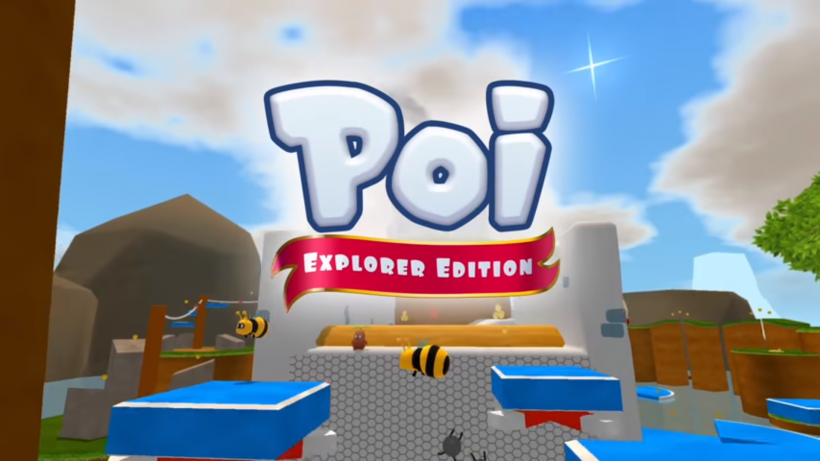 Not quite Indiana, more Dora.

The last few months of 2017 saw a flurry of 3D platformers release on the Nintendo Switch. Poi: Explorer Edition was one of them, and was arguably the one that got the least attention – possibly due to the fact that it shared a launch week with a certain Italian fella’s Odyssey…

Poi‘s premise is simple, you play as one of two siblings who both want to be explorers. After setting off from home, the brother and sister duo meet an elderly explorer who has retired due to losing all of his explorer medallions in a violent storm. I bet you can guess where this is going? Using an airship as a central hub, you need to collect the medallions to unlock worlds to be able to collect more medallions – with each medallion requiring you to fulfill a certain requirement to attain it. It seems a launch week isn’t the only thing Poi shares with Mario! As with any 3D platformer, the medallions aren’t the only collectible items on offer here, with coins and costumes also scattered throughout the various areas available to explore. Although the outfits seem to be purely aesthetic, the coins can be used to unlock various items and upgrades for your character – such as an extra health slot or a compass to help you find collectibles. As you progress, the sky surrounding the airship that serves as the game’s hub will start to fill up with other ships and small islands for you to visit – where you can interact with other characters and unlock bonus stages and challenges.

Completing these challenges and adding to your medal collection is made easier due to the fact that Poi controls really well. The platforming is good fun, and both the jump and analogue controls feel responsive. The only negative here is that I found the jumping a little too floaty when trying to land on enemies’ heads to see them off, making for some rather frustrating and needless deaths. Saying that the difficulty curve in Poi is nice and smooth, and this will certainly be of benefit to the younger audience that this title is clearly aimed at. The overall aesthetics of the game also seem to have younger gamers in mind. The game is very colourful and the worlds are the classic platformer staples – with forests, sand and ice being some of the themes on offer. Graphically, the game is a little basic but it runs well in both handheld and docked modes and let’s face it – I can’t see the game’s target audience caring too much about resolutions and looks as long as the game is fun.

It soon becomes quite obvious as to where Poi draws its inspirations from – with the signature triple jumps, backflips, level design and the rather annoying fact that it kicks you back to the hub after collecting each medal, you’ll soon start noticing the not so subtle nods to Super Mario 64. This isn’t necessarily a bad thing, and Poi: Explorer Edition does enough right to make the game an enjoyable experience, it just doesn’t quite do enough to make it a memorable one.

Poi: Explorer Edition is a nice, budget 3D platformer that is perfect for younger Nintendo Switch owners. The challenges in the game can become rather repetitive, but if you are looking for a colourful platformer that is inoffensive and fun, then you can’t go too wrong with Poi!