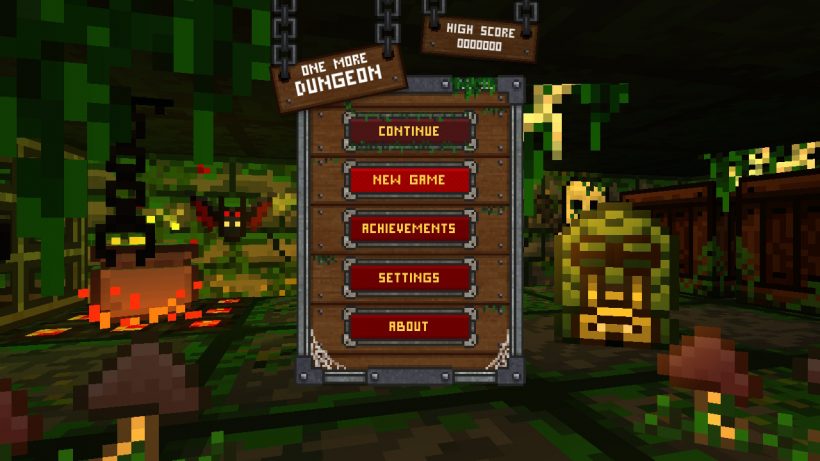 One of the most popular genres among the indie community are definitely the rogue-likes. The thrill of never knowing what to expect (due to the always procedurally-generated levels) added to the punishing permadeath system makes them a challenging, rewarding and somewhat addictive experience.

From a developer’s standpoint, it is also a very flexible genre that can be mixed up with so many different styles of gameplay and artwork. One More Dungeon comes to prove this point, with its unexpected mixture of dungeon crawler within a FPS perspective, which resembles classic games like Doom and Heretic. 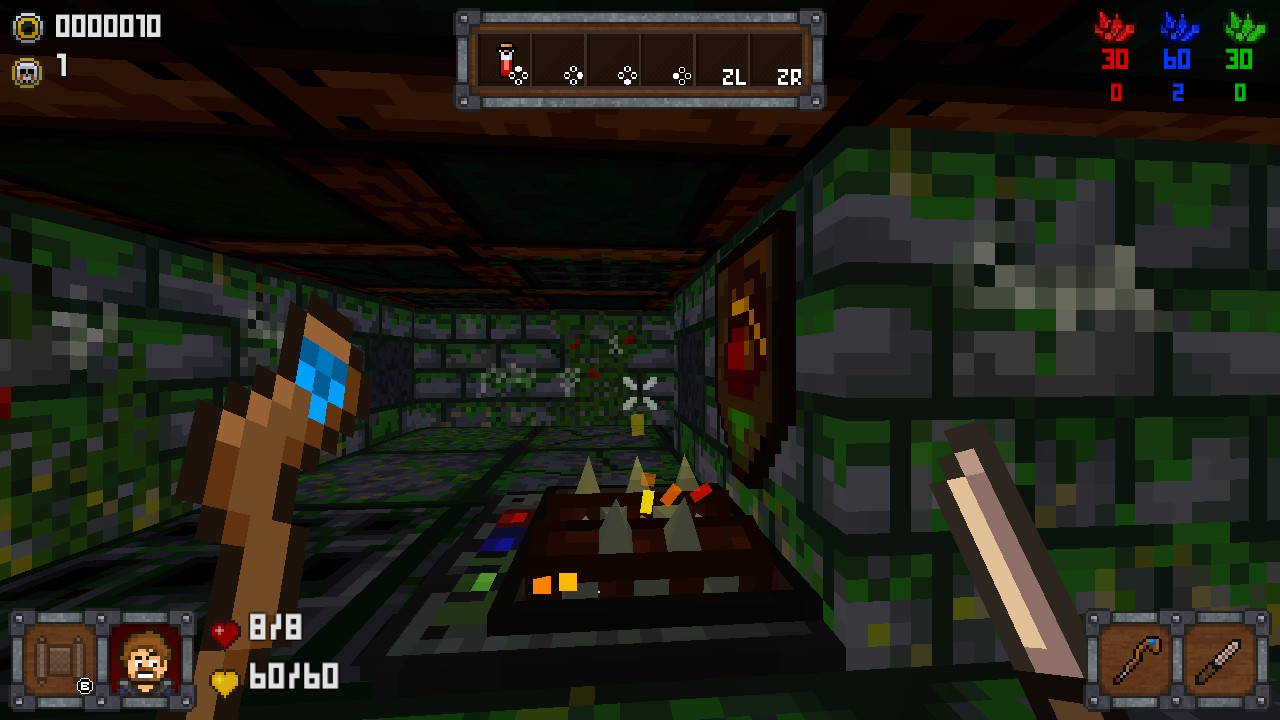 You’ll always start at the first floor of a random-generated dungeon, equipped with a staff and a sword. Without much of a hint of a more elaborated narrative, you then start exploring the claustrophobic corridors in search of an exit. Exploration comes with all the perils and rewards that you may expect, as you’ll not only face many monsters along the way, but will also find more powerful equipment, items, and altars that will improve your odds of surviving.

In order to finish each level, you’ll have to find and defeat a more powerful foe, which holds the key that can open the door to the next level. Then, the cycle is repeated, until you finally get to the last level – or, more probably, your early demise. 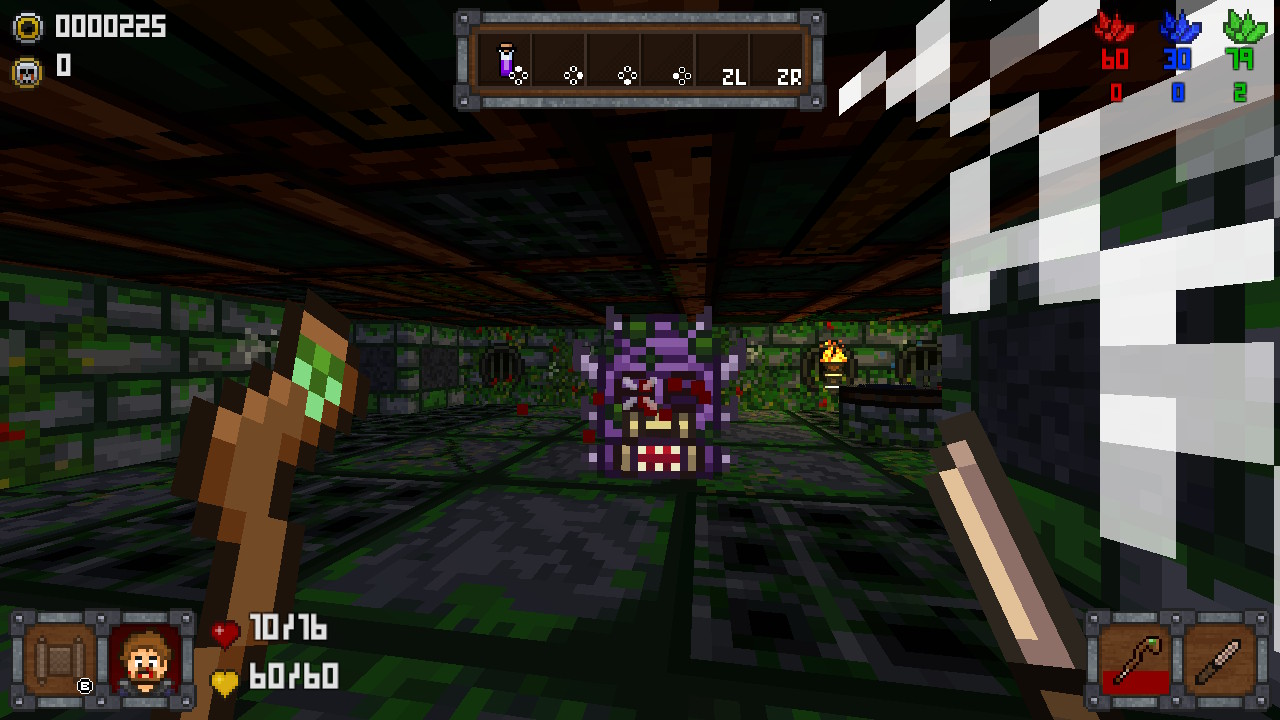 Even though One More Dungeon looks and plays like a FPS, don’t go expecting the finesse necessary to call it a proper ‘shooter’. Well, you can actually shot projectiles. Your staff can be activated with the L button, and you can use it to attack enemies from afar, as long as you have the ammunition necessary to your staff’s element – there are red, blue and green crystals, used for fire, ice and poison staffs, respectively.

The main problem with that resides on the fact that it is very hard to aim properly. As you may expect, your right stick controls the camera (but only horizontally, as your vertical perspective is locked), but it has a very sizable dead zone, that can’t be eliminated even when you change the sensibility options on the menus. Due to that, I found myself resorting to sidestepping as the main way to aim. As mentioned before, you also has a sword that can be used by pressing R to deal melee damage. However, even the early enemies deal huge amounts of damage, so you’re constantly discouraged to fight them face-to-face, so your staff is still your preferable combat option. 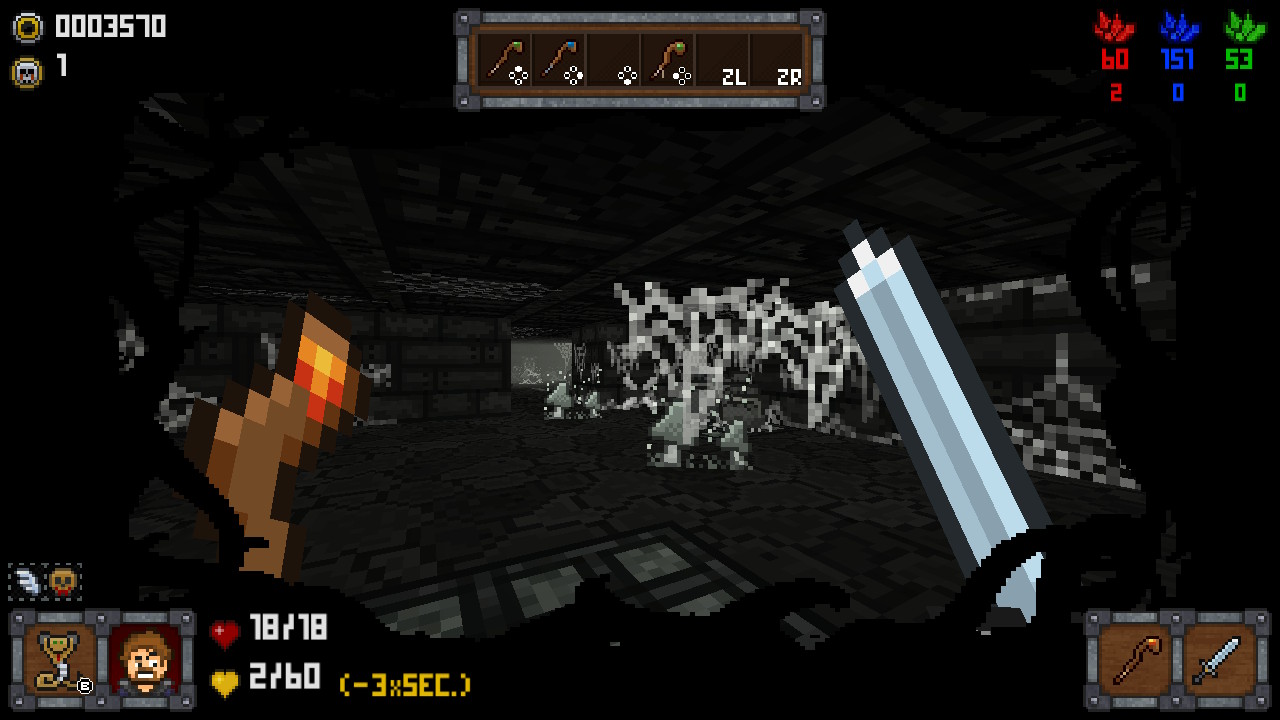 What One More Dungeon lacks on the shooter department, it compensates on delivering a solid and enjoyable roguelike experience. You’re always rewarded for trying to get further on each new run, as each monster you kill rewards you with points that can be used to unlock different game options, called Mutators. These options can facilitate your experience, allowing you to start with more health-points, for instance, or can raise up the challenge, adding more enemies, or other different conditions to your gameplay. All these new game options, added to One More Dungeon’s simple but distinct 3D 8-bit visuals, make it a nice option for people who loves rogue-likes and want one more of those experiences on the go.

If you’re really into the rogue-like genre, One More Dungeon can deliver that enjoyable loop of trying to get as further as possible at each run. Although it lacks some finesse when it comes to a more solid FPS experience, its customizable gameplay options will keep you hooked for a while.