Poly Bridge, from developer Dry Cactus, brings the bridge-building genre onto the Nintendo Switch for the first time, and may just scratch a puzzling itch that you never knew you had. The trial and error difficulty curve may lead to frustration, but I’ll cross that bridge when I come to it. 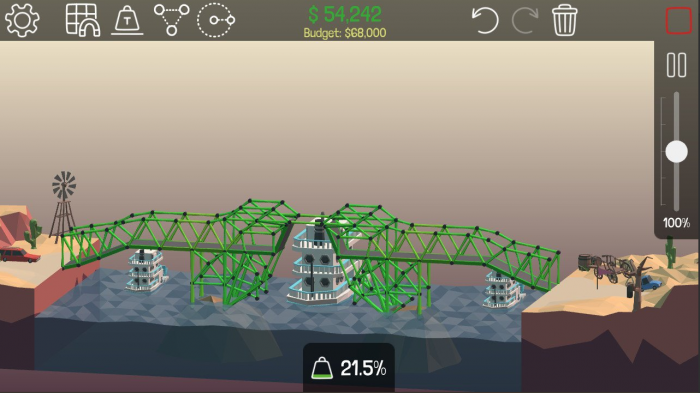 A niche puzzle game, Poly Bridge is one that fits the Switch console well, in that it is easy to drop in and out of, and benefits from sharing with others. With over 100 levels and a sandbox mode (that allows you to really get creative with the tools provided), there’s a lot to get stuck into here, and it utilises the Switch’s fancy new capacitive touch screen by allowing you to pinch and zoom your way to victory. Much like the last game I reviewed, Mom Hid My Game!, there is an elegant pointer system for those who wish to scrutinise their masterpieces on the big screen. A largely successful port of the PC version, Poly Bridge on Switch does miss out on the Steam workshop community, but that isn’t any fault of the developer. One day we’ll hear about the Switch’s online infrastructure…

The gameplay is similar to Mario Maker, in that you can switch seamlessly between the grid-based building mode and playback, watching your machinations play out before your very eyes. It’s incredibly satisfying. You can even slow down and speed up the simulations if needed, a feature I used frequently in order to identify the pin-point weaknesses in my structure. Many a time did I find myself ever so slightly over-budget, anxiously removing wooden support beams one by one only to then watch my questionable construction buckling under the pressure of a camper van. A dangerous game of Kerplunk with severe consequences.

My main issue with Poly Bridge is that I spent most of my time with the game thinking ‘what am I doing wrong?”. Whilst a common feeling of perplexion is experienced in most puzzle games before you reach that ‘light-bulb moment’, I don’t know whether it has done enough of a job of explaining its mechanics, and that ultimately ended up in frustration quite a lot. Poly Bridge has 10 levels giving you the basic rundown on the skills and materials you’ll need, from basic triangular wooden support to hydraulic drawbridges, and I found myself revisiting these levels a lot more than I should have needed to. I’d spend half an hour creating my magnum opus of the bridge building world, only to watch it fall down faster than a straw house next to a huffy puffy wolf. Then again, perhaps I’m just bad at the game.

Poly Bridge’s peaceful atmosphere, achieved with the combination of its beautiful polygonal art style (which, might I add, has a lot of variety throughout), slow methodical gameplay void of time constraint, and chill music, directly contrasts with the frustration its bridge system creates. For fans of the genre, the tool-set presented here and the abundance of challenges to get sunk into is great, but some may be left with a bitter taste in their mouth. If you can master the physics you’ll have a blast here.

Poly Bridge provides to the player an extremely in-depth tool-set that is only limited by creativity, or, in quite a few cases, understanding of the mechanics. For those hungry to build bridges, it’s an essential purchase. If you don’t like the look of the challenge however, it may be water under the bridge.