The Darkside Detective from developer Spooky Doorway is yet another indie title that I probably would have overlooked if I’d seen it on any other platform, but it somehow finds itself a perfect little home on Switch. By honing a wacky storyline into 6 distinct detective cases, it’s a lovely pick-up-and-play title that suits the console’s handheld nature to a tee. But what’s it all about? Let’s dive right in… 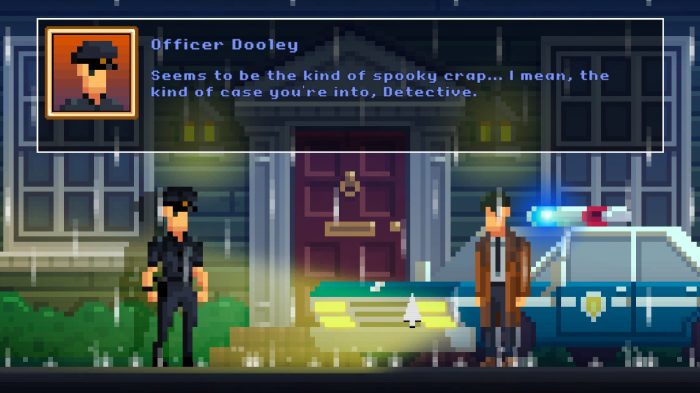 Brimming with references from 80s and 90s pop culture from every orifice, The Darkside Detective is a point-and-click adventure starring the eponymous ‘Darkside Detective’ Francis McQueen alongside his comic relief sidekick Officer Dooley. Throughout the game’s six cases, you investigate various environments and chat to a multitude of kooky characters in your mission to solve each case. Whilst you can’t physically move throughout the levels, most objects can be scrutinised for clues, and every character has multiple dialogue options for you to ponder at your leisure. Much like similar point-and-click adventures, you can also obtain items for use later on – the game does a good job of telegraphing when and where you’ll need to use a particular item, so you’ll never be truly stuck.

What’s immediately apparent with the game is its sharp grasp of humour and intrigue. It’s not quite on the level of, say, Grim Fandango (but let’s face it, what is?), but all of the characters have their own endearing eccentricities, and Officer Dooley in particular frequently provides some humorous one-liners. Some jokes can fall a bit flat, however, and players below a certain age probably won’t understand some of the game’s more obscure references, but the developer has done a fairly decent job with the writing, overall. 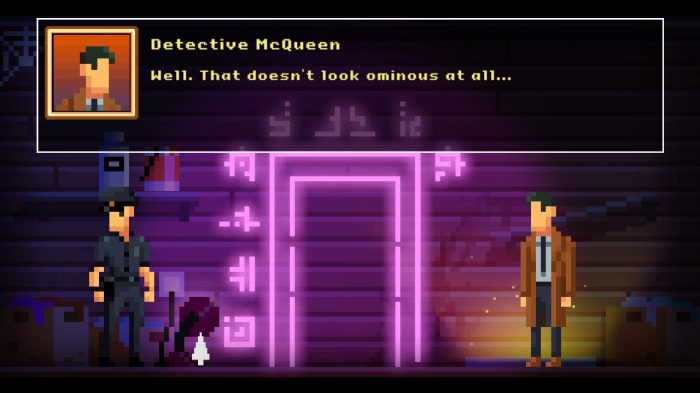 Graphically, The Darkside Detective looks both great and appalling, depending on your personal preference. The simplified pixelated graphics may take a good while to get used to, and if you’ve been playing the Switch version of Thimbleweed Park recently, the stark change in graphical fidelity can be a tough pill to swallow. Nevertheless, I personally thought they did a great job, and most of the scenes are very effective in their own right. In particular, the use of colour is impressive throughout and thoroughly manages to capture the period in which it’s set. The character design is also impressive, albeit simplistic – you’ll come across some great figures, some of which you’ll recognise, such as Edgar Allen Poe and H.P Lovecraft (who, incidentally, have a highly amusing fight over who produces the scariest books). 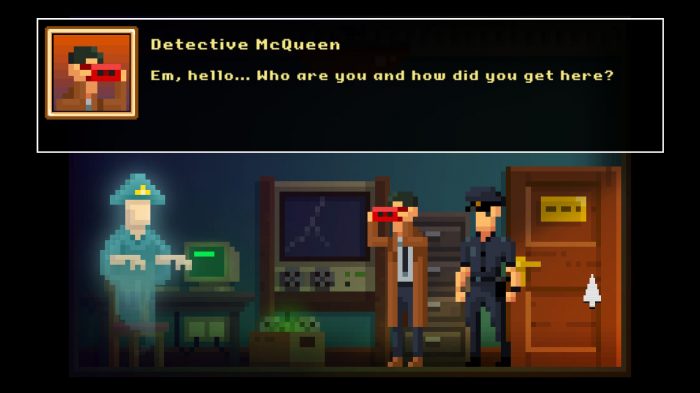 I have to give a shout out to the soundtrack in The Darkside Detective – it really does a fantastic job at capturing the essence of a mystery detective caper, with clear similarities to classics such as Twin Peaks, The Thing and The X-Files. I have to be clear though, this game isn’t just a mishmash of different elements from TV and Film – it carves its own identity wonderfully well. I’d urge you to buy it just for the soundtrack alone.

The Darkside Detective is a great little game that will undoubtedly keep you occupied for a good few hours. The writing isn’t impeccable, and I would have liked it to be a bit longer overall, but I thoroughly enjoyed my time deducing all the mysteries of the Darkside.

The Darkside Detective is a successful spin on the classic point-and-click adventure, delivering an engaging narrative, funny characters and one of the strongest soundtracks in a good while. I sincerely hope a sequel is in the works.