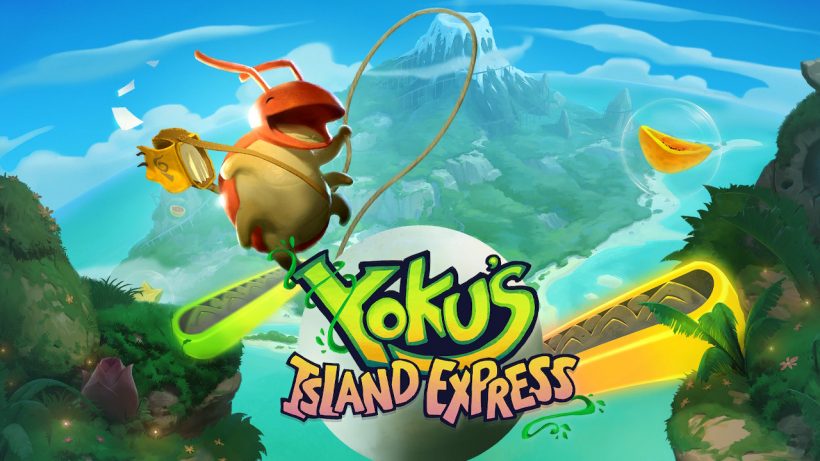 That dung beetle-postman sure plays a mean pinball. 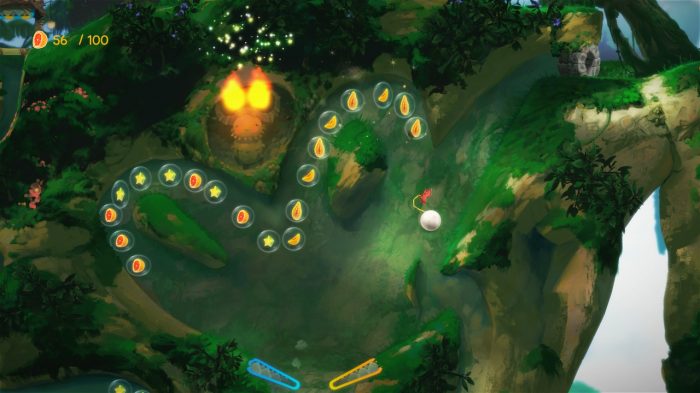 I explained the premise of Yoku’s Island Express. You’re a beetle arrives on an island who happens to be the new postmaster. Bad things are happening and you need to travel around the island with your ball by using flippers and bumpers to catapult yourself around areas and unlock its secrets. The look of dumbfounded confusion was quickly followed up with, “You’ve just said that you’re a beetle-postman delivering letters in an island pinball machine like that’s a normal thing.”

I realised that’s the funny thing about Yoku’s Island; you are in this crazy situation and you never really acknowledge how utterly surreal it is. Why? Because it just works. It works really, really well. It’s bold and daring as the island brings together so many disparate ideas and gels them together in a way that feels not just natural, but right. 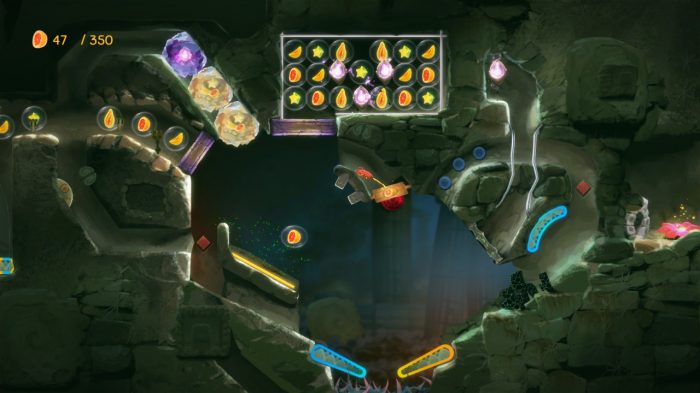 The first thing that grabs you in Yoku’s Island Express is the gorgeous environments throughout the island. Both the backdrops and foreground are beautifully detailed and stunning. As you adventure to new parts of the island, the weather can change and the sky changes colour creating dramatic effects all within this hand-painted world. It’s clearly a labour of love as you soon realise that the whole island is connected through a single giant canvas. Zooming out on the map shows you everything you’ve uncovered in your adventure and the detail is breathtaking.

The game controls are deceptively simple. You control Yoku the beetle who is tethered to an ivory ball. The ball is crucial in his adventure as the island is made up of natural obstacles that, strangely, you find in pinball machines. By hitting the shoulder buttons, you can use the flippers, bumpers and rails to launch Yoku’s ball into the air. But let’s make no mistake here, this isn’t just a pinball game. Well, it is a pinball game but that’s not the main thrust. In Yoku’s journey he needs to unite the three chiefs of the island, which leads to a light metroidvania-style adventure. Fun, quirky characters have optional side-quests which can help you on your journey and there are a plethora of collectables which impact how you explore the island. 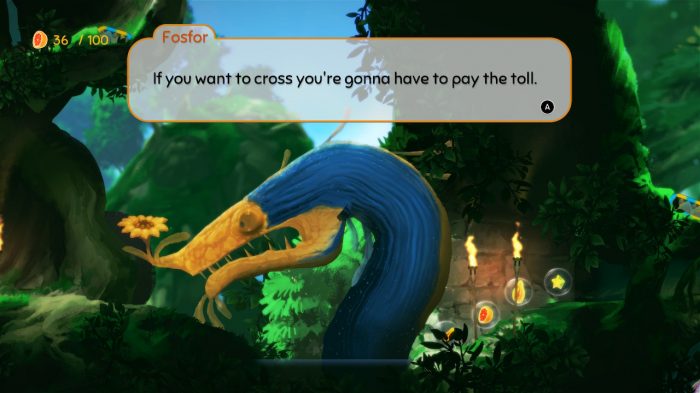 It may seem strange talking about exploration in a pinball game so let’s clear up a misconception. I’m not a massive fan of pinball games – I tire of them pretty quickly. I came to the end of Yoku’s Island Express thinking that I’ve just played a great adventure game. That’s right. Not a pinball game. An adventure game. Of course it has all of the pinball mechanics outlined above, and there are so many neat touches it’s clear that the team at Villa Gorilla love their pinball games. The implementation is handled with care and class, keeping the game balanced and engaging.

Another noticeable aspect of is the music. The compositions are lush and inviting, capturing the essence of this quirky island perfectly. The instruments used in the recordings whisk you away to Yoku’s island with ease, shifting from upbeat and tropical to dark and moody as the scenes change. The score hits the right notes perfectly giving you you that island vibe as you find yourself humming the upbeat theme tune later in the day. 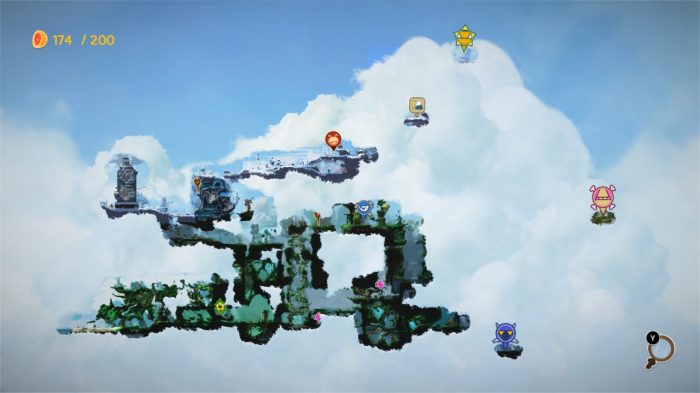 Unike your traditional pinball table, there’s no score in Yoku’s Island Express. There’s an in-game currency of fruit that is earned by hitting bumpers and breaking objects dotted around the landscape. This becomes a central part of the game in a number of ways. The most notable need for the fruit is that you “pay” to unlock various bumpers in the world. Some of these access small areas with some hidden gems while others are key to the progression into a new area. There are moments that you’ll find yourself lacking in the fruit department but that isn’t really an issue here. You can just go and find a nearby self-contained pinball area and start playing. It’s a pleasurable way of grinding as you try and hit those perfect shots and get some tricky sequences right. You’re often rewarded for your dextrous efforts by large fruit drops that you can collect and then move on.

Collecting fruit also allows you to open up a fast-travel network in the game called the Beeline. Getting around soon starts to take a while so unlocking these travel posts becomes a very helpful mechanism. These shortcuts rocket you from point-to-point in a matter of seconds while also having the secondary purpose of opening up otherwise unreachable areas. Nothing feels like an afterthought or a compromise. 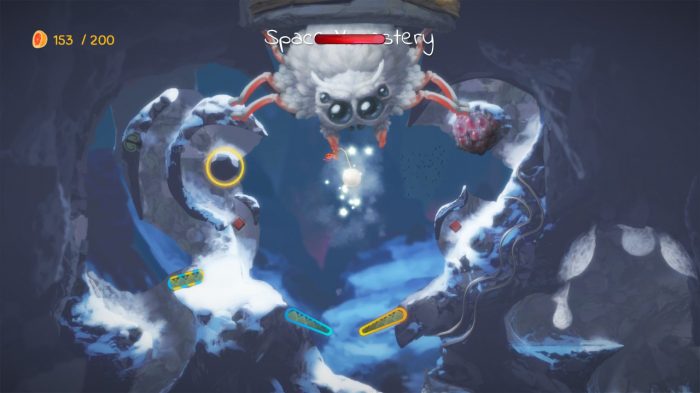 The items themselves are varied and fit the cute / weird vibe perfectly. You start off with a party blower to make a noise and break with the things around you. You gradually discover a variety of power-ups including meeting up with your partner-in-crime Kickback, who appears in spots to help you jump over otherwise inaccessible obstacles or avoid falling between the bumpers in the pinball areas. The ensuing powers are key to exploring more of the island. Soon enough you’ll find new ways to solve solving puzzles and overcome otherwise untraversable areas in very metroidvania ways.

The story is built to be completed in a certain order, but the openness of the island allows for plenty of exploration and experimentation. It’s worth pointing out that I managed to get myself trapped in the game. I’d entered and exited an area in such a manner that I genuinely thought I’d found a game-breaking bug that stopped me from re-entering. Without wanting to give too much away, simply taking the time to explore other areas of the island helped to find a route back. The team at Villa Gorilla had clearly found – and handled – many of the pitfalls that come with open-world games and it’s another example of the stunning attention to detail for their first outing. 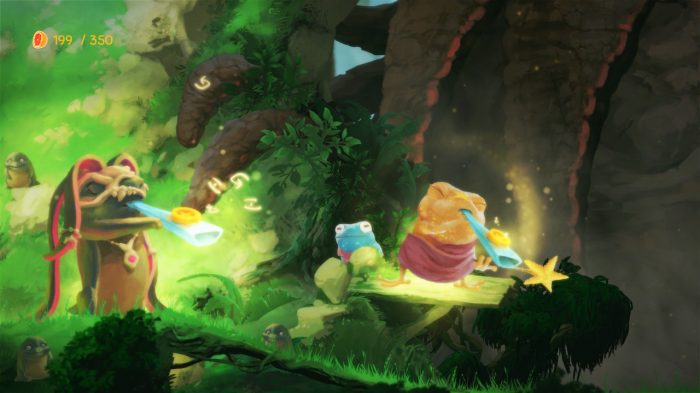 Combining gameplay from distinctly different styles with lush visuals and music has created something very special in Yoku’s Island Express. It’s a refreshingly unique gem that simply shouldn’t be missed.

Its charming story and characters keep you smiling as the game continues to challenge you while its hidden areas and collectibles will keep you coming back for more. Whether you’re a fan of pinball machines, metroidvania or puzzle games, Yoku’s Island Express delivers class in every area for every type of player.