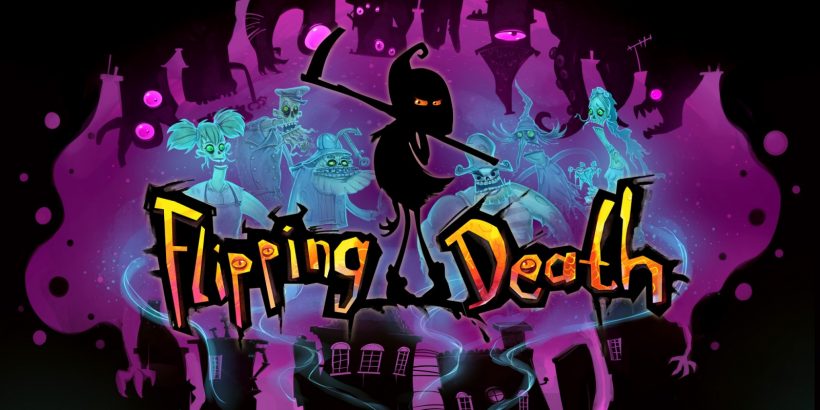 Penny is just your average teenage girl obsessed with horror and death. During a typical night in the quaint town of Flatwood Peaks, Penny heads to a nearby graveyard to satiate her morbid curiosities (much to the disapproval of her boyfriend). As if to almost prove a point, the old mausoleum which she enters suddenly collapses into the ground, sending Penny plummeting to a grim, sudden death.

But that’s not the end of Penny. Her ghost awakens in the dark, gothic land of the dead, where Death himself resides. After Penny stumbles across the Grim Reaper, he squeals with glee, delighted that after thousands of years, he has finally found his long-awaited temp. Wait, what..? Before she’s even given a chance to get her bearings, Penny is clad in a hooded robe and given her very own scythe. Death is off on an overdue vacation to the moon, so Penny has a job to do.

This is the basis of Flipping Death, a platform game by Zoink Games oozing with humour from start to finish. I’ve always been drawn to comedy of this nature. Perhaps it is because I grew up reading the works of such authors as Douglas Adams and Terry Pratchett (whose own critically acclaimed novel Mort seems to have directly influenced Flipping Death), but I found myself giggling with sheer delight all the way through the relatively brief 6-7 hour experience.

Rather than the relatively mundane task of simply farming the souls of the recently deceased, Penny’s new job is thankfully a bit more involving. Upon strolling across the land of the dead, you’ll come across a multitude of spirits, some of whom task Penny with utterly bonkers requests. The first of which is fairly straightforward: find out who the resident murderer is and, somehow, bring him/her to justice. But how can Penny possibly do this..? She’s dead!

Possessing a character grants you two very specific abilities: you can move them around at your will, and you can listen in to their thoughts, which more often than not may give you subtle clues as to what you’ll need to do next. The dialogue during these sequences is particularly impressive, as Penny will often respond to a character’s thoughts, leading to a brief, yet hilarious back and forth between the two.

All characters also carry a particular item, and by jiggling the right analogue stick around whilst possessing a character, you can independently move the arm around that’s carrying the item. This is primarily used for solving puzzles – so for example, you can possess a deranged dentist carrying an overlarge dental drill, which comes in handy for opening up large cans of paint. You can also just mess around with this ability, if you wish. I was in a genuine fit of giggles simply because I was in possession of an axe wielding lumberjack, chasing around a rather creepy individual who happens to enjoy licking things. Serves him right, really! (Although I should mention, you can’t actually hurt or kill any of the characters by doing this, but it’s delightfully funny nonetheless.)

If this all sounds completely insane, that’s because it is. Flipping Death relishes in the strange and bizarre. Sometimes, however, the game is so stubbornly weird, that you might find yourself wondering what on earth you’ll need to do next. Thankfully, however, going into the start menu lets you view a series of hints. These are simply in the form of vague doodles displaying your next objective, so whilst it may not be immediately clear what you need to do, you’ll at least get some idea of who you need to possess next, or where you need to go.

Flipping Death excels in every aspect. The gameplay is sublime and so unique that you’d be hard pressed to find anything similar, at least on the Switch (Zoink Game’s own Stick it to the Man doesn’t count!). Not only that, but it displays wonderful graphics that absolutely burst with personality. Everything from the residents to the various environments display incredibly unique characteristics, and it really serves to elevate the humour to further heights. Even though it’s not ‘technically’ impressive in the sense that, say, Breath of the Wild is, I guarantee you’ll still spend frequent moments just admiring the scenery thanks to the stellar art direction.

Perhaps even more impressive than anything else, however, is the sound design. The voice work in particular really makes this game – it’s that good. All of the characters have plenty of dialogue (some of which you can actually prompt with the D-Pad during possession), and listening to what they have to say is an absolute joy. I have to give a shout-out, specifically, to Death himself – he sounds nothing like you’d imagine Death to sound like, and it’s bloody hilarious. Similarly, the music suits the setting to a tee, with discordant brass instruments playing as you roam about the environment, lending to an overall sense of the bizarre and macabre.

Going through this game, I was really ready to give it full marks – I simply loved it. But alas, just at the height of my enjoyment, it ended. I really wish it could have gone on for a few more hours longer, and for that reason alone, I can’t give it a perfect score. Just know, however, that if you go into Flipping Death with an open mind, you’ll be getting an experience like no other – a hilarious, bizarre jaunt into the afterlife.

Flipping Death is a truly unique experience. Boasting beautiful art design, stellar voice work and gameplay like no other, it’s a game that will have you in fits of laughter. If only it lasted just a bit longer.