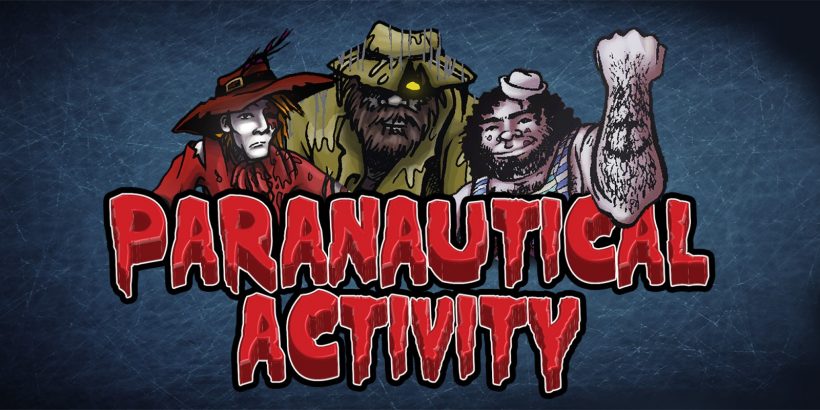 Where were the ghosts? Or the water, for that matter?

A lot of games are out there to wind players up to the max, and Paranautical Activity is one of those.

This Digerati title developed by Code Avarice is a first-person shooter which is presented in a pretty unique pixelated format. Each level is set across a labyrinth of rooms, and it’s your objective to shoot and destroy just about every sign of life that you can see.

The layout of the rooms should be unique each time – you might find yourself in a position where you only have one room to choose to assault next, whereas on other occasions that can be as many as three. Prior to each level, you’re offered a choice of weapon layouts, from shotguns to explosives to a crossbow called the David Bowie, for some reason. The explosive choices didn’t seem to offer as much potency as the shotgun, for some reason. Fortunately, you also have a sub-weapon at your disposal if things get a little hairy.

Get killed once and that’s it; it’s the dreaded game over screen. And it’s a problem – you can find yourself getting overwhelmed almost immediately after first entering a room, particularly those which offer a generous helping of enemies, and the weapon effectiveness just isn’t where it needs to be for that sharpshooter-marksman feeling that is needed when your objective is to dash from room to room and take out everything in sight. A lot of enemies will fire guns in your direction, making the better-in-close-range shotgun a lot less effective, but strafing through the gunfire will result in you taking damage even if you thought you’d managed to fit through a gap.

Adjusting your line of sight to find the enemies is also a problem, as you’ll see them approach and go around or over you, only for you to turn around and find no sign of them. It doesn’t help that the weapon performance is on the whole so lame, as you see shots which just should not miss sail wide of the mark. Boss fights are just silly – you can’t possibly get away fast enough to safely shoot and run, and shooting from afar is a pain too when your shots miss and enemies can get you from anywhere.

It’s quite easily to compare the game visually to Minecraft and all of it’s spin-off titles. What isn’t quite as obvious is why the developers chose to make the game so dark. It detracts from the personality, and while it may have been the intention to make each room feel intimidating, it has the effect of making you not want to go into the rooms rather than wanting to rise to a challenge. With enemies on the whole a similar colour to the surroundings too, you’ll need to properly check each room to make sure there’s nothing left before progressing onwards.

The quantum of solace in making things at least a little interesting are the achievements, and again the challenge level is high. From finishing rooms without taking damage to beating any mode without taking any items, there are at least some unlockables to satiate your sadistic efforts, but some of them don’t offer a reward whatsoever!

Paranautical Activity is a ‘game over’ game of the unfair variety. Hold out for a sale price on this.

Small, dark and not very handsome, Paranautical Activity is a disappointment. Lame weapons, poor controls and a lack of personality nip this one in the bud.