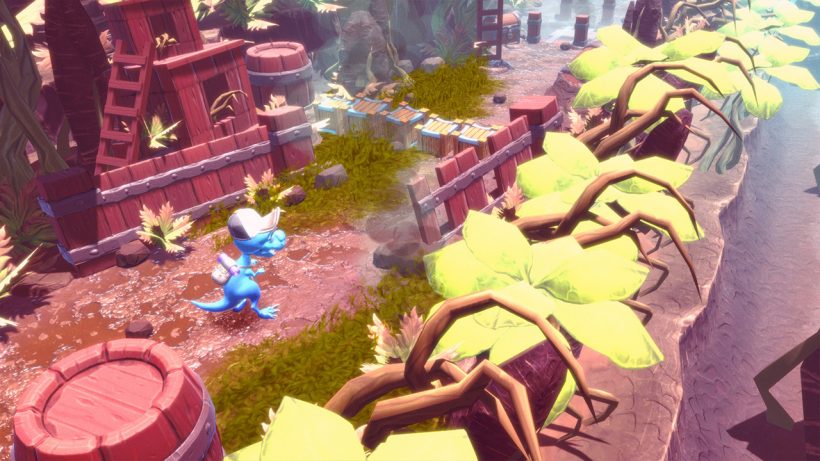 Remember the glory days of the N64? Experimentation with the earliest 3D platformers was the order of the time, with timeless classics like Super Mario 64 and Banjo Kazooie hitting shelves. It was like the gaming world just skipped the primitive stage of the genre and instead just leapt straight to the bonafide greats. Unfortunately, Tiny Hands Adventure rolls back the clock a bit too far, and shows how the genre could have been if it was delivered without the personality and picture perfect platforming which made those N64 titles so good.

Ultimately, the experience is terribly underwhelming. The design of Borti the Dinosaur, your protagonist in Tiny Hands Adventure, doesn’t help with this – lacking expression, slickness of movement and any sort of impressiveness of his repertoire of offensive moves, he’s someone you’ll quickly grow tired of.

The gameplay feels like a ‘My First Platformer’ identikit. Clunkily moving around, it’s all about hitting one button to swing Borti’s tail and take out enemies (but for some reason it’s all too frequent that you get so close to the enemy in order to actually hit them that Borti gets whacked and one-hit-killed at the same time. There’s no feedback satisfaction from killing enemies – Borti just waves his tail, and without it even looking like it connected with the enemy, the enemy just rolls over and succumbs rather lamely.

Level design and camera shifts are also an irritation. One level has you ascending a lighthouse by jumping on blocks which jut out from its side. The camera automatically rotates as you jump, confusing you as to which direction you need to point the control stick towards and also offering a lot of mistrust as to exactly where Borti will land with his jumps.

The developers should be commended on their attempts to distinguish levels – yes, you have the platformer tropes of simply presenting the same action within a different environment for the most part, but there are some neat ideas here including switching things to a 2.5D side-scrolling platformer presented in a cartoon style for one of the levels.

But that idea provision doesn’t extend to offering a fully unique experience in each locale. Each level shares the same disappointing formula, and the lack of reward is something which continues to boss levels – Borti swinging his tail and technically collecting but getting next to no feedback from the enemies to offer a means of satisfaction.

The hard guitar riff which offers the musical accompaniment also feels strangely out of place. In good platformers, the world feels alive and the musical effects play a big part in that. It’s not the case here, as the track almost distances Borti from a personality while also distancing the player from getting fully immersed in the world due to it feeling like a game and not alive as it should do.

It’s controversial I know, but I’m going to say it – playing Tiny Hands Adventure gives the same sensation as people got in the 90s when they played Spyro or Crash Bandicoot after playing Super Mario 64 and Banjo Kazooie; they’re just not in the same league, and you experience a tiresome chore of a platformer rather than the mind-blowing world of adventure that those better games provided.

Tiny Hands Adventure is the vanilla ice cream of 3D platformers; It has nothing exciting which makes it stick out, and is the plainest of platformers. Heck – some people prefer ice cream, but no platform fans will have this as their favourite.