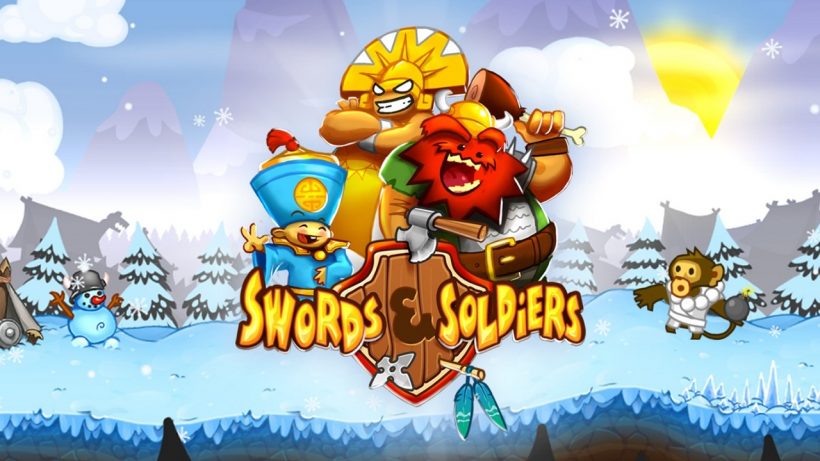 The hybrid nature of the Switch allows for games of all kinds, sizes and styles to come to the console, including those that would traditionally be relegated to mobile platforms. Due to their limited scope and controls – and, of course, the unwanted presence of micro-transactions – mobile games are often thought of as simplistic experiences, shovelware, or games of inferior quality.

However, short gaming experiences such as those found on mobile platforms can be quite entertaining when done properly – as in Swords & Soldiers.

Swords & Soldiers is a game that you can play anywhere, its five-hour campaign consisting of bite-sized levels that can be enjoyed in short bursts. The game also offers a skirmish mode, unique challenges, and a welcoming couch multiplayer option, all presented in a charming 2D cartoonish art style.

You wouldn’t play Swords & Soldiers’ campaign for its narrative, though. There are four different scenarios, one for each of the four factions, but the story tying them all together is little more than an excuse for you to get into battles. There are one or two funny jokes here and there, but without a doubt, the appeal of Swords & Soldiers lies within its combat system.

Mechanically, Swords & Soldiers is a side-scrolling strategy game that follows a similar structure to real-time strategy games, but with emphasis placed on constant waves of enemies. You don’t control your units directly; they simply walk through the scenario, attacking enemies or using their special abilities automatically.

Due to this, some levels may feel a lot like tower-defence. The main difference is that you not only have to defend your base, but you must also apply continuous pressure to enemy troops, until you can destroy their structures. It is during such combat that the hybrid nature of the Switch becomes significant, as handheld mode offers touchscreen controls in addition to button inputs.

In docked mode, shoulder buttons open menus where units can be created or powerful spells cast; this option in handheld mode feels laborious in the later levels, as you need to go through several different steps even to do the most basic actions – a massive pain on those levels where you need to make quick decisions.

However, the overall portable experience is much more enjoyable. Units and spells are all listed separately on-screen, and you can easily swipe across the map for some quick recon and forward-planning. Perhaps this is why Swords & Soldiers feels like a mobile game on Switch – it is best played as a mobile game would be. It is an enjoyable title, though, and with couch multiplayer available, it is an interesting split-screen gameplay experience any time, anywhere.

Among the mobile games available on Switch, Swords & Soldiers stands out as an enjoyable strategy game that, despite its simplicity, works well as a bite-sized handheld experience.