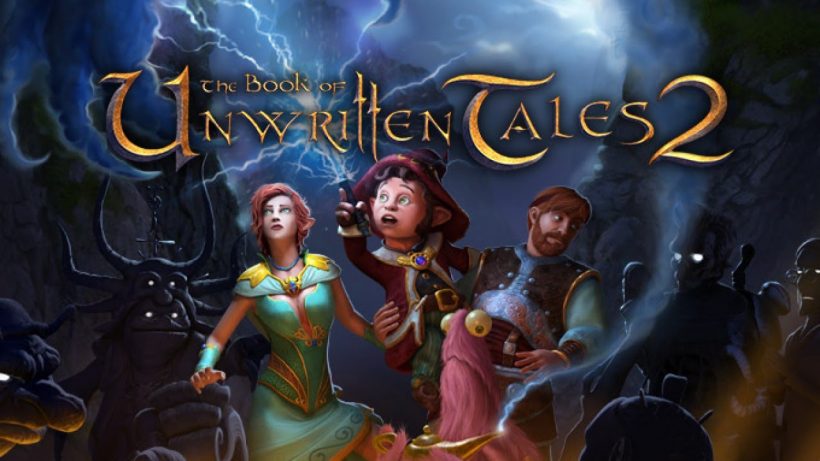 This new instalment sees you switch back and forth between the four returning heroes – Wilbur, Ivo, Nate and Critter – as they journey to resolve the mystery of why elements of the land keep shapeshifting. An adventure of 20-or-so hours of gameplay, how does this second trip to the land of Aventasia hold up at home and on the go? Exceptionally well, as it happens.

An entirely standalone adventure, The Book of Unwritten Tales 2 takes place soon after the evil witch Mortroga’s defeat. If you’ve not played the first instalment, don’t worry – there’s a spiffy (and appropriately witty) prologue that does a great job at getting you up to speed, with any additional necessary context being provided naturally in early character conversations.

The unique personalities of each character shine through thanks to some top-notch voice acting, with Ivo, the distant elven princess wanting a life outside of her castle, is a particular highlight. All four characters do well pull you into this epic tale of wizards and gnomes in a way that’s rib-tickling, yet believable; I lost count of how many times simple British-isms like “cor, blimey!” made certain scenarios more chuckle-worthy.

When it comes to the logic puzzles themselves, The Book of Unwritten Tales 2 doesn’t do anything too drastic. Each scenario involves a problem to be overcome, and this is usually done by choosing the correct dialogue options, or connecting objects together. This style of sleuthing is a good reminder of how obtuse certain scenarios used to be in old adventure games, while here, I was never left scratching my chin for too long.

Popular fantasy franchises like Lord of The Rings and Game of Thrones are all lovingly poked fun at, with much of the game’s humour being derived from lampooning familiar scenes and concepts. Even the character designs and environments help reinforce this eccentric style, with the bright colours really popping on the Nintendo Switch’s screen.

Regrettably, there’s nothing unique to this version that will tempt anyone who’s played it before to double-dip, other than the slight visual flourish. Though, by playing it portably, I did come to appreciate The Book of Unwritten Tales 2’s strong attention to detail in this regard.

The Book of Unwritten Tales 2 might be a classic-style adventure game with a 21st century coat of paint, but it’s elevated in how it sets out to regale you with a funny fantasy tale and absolutely nails it. It’s a shame that Switch players currently can’t jump into the original game, but having such a witty adventure on the go makes this a welcome addition to the catalogue.

The Book of Unwritten Tales 2 is a laugh-filled adventure game that’ll have you chuckling away at its parody of the fantasy genre. It might sometimes stay too faithful to its point-and-click forebears, but its world and characters are utterly charming.