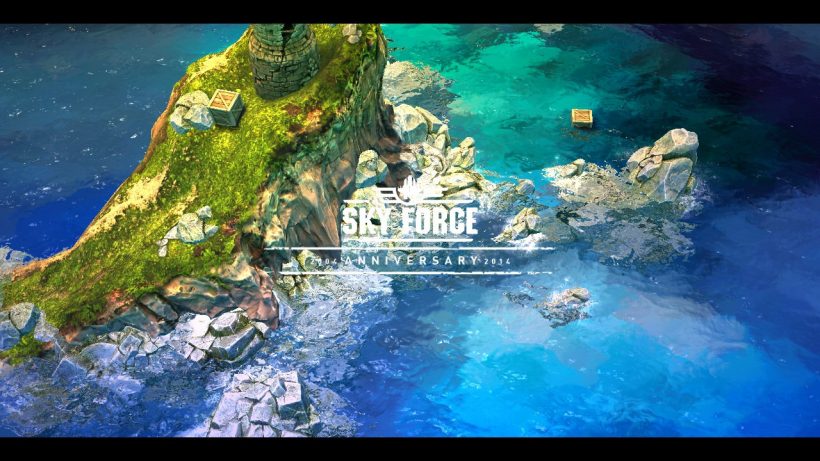 Sky Force Anniversary is a wonderfully presented game, and is the latest instalment in the Sky Force series, a franchise which originated in mobile gaming on the Symbian OS in 2004. This fact means that Sky Force has been a mobile game series for longer than most mobile platforms have existed.

The basic gameplay has remained unchanged. This isn’t necessarily a negative, as many classics are still pretty faithful to their 80s and 90s incarnations, but Sky Force doesn’t have the same strength to continue unchanged. All the polish in the world can’t hide its bare-bones gameplay.

The game is a scrolling shooter; your ship progresses through the level and you position it to take out obstacles and enemies. Along the way, there are collectables to pick up, such as abandoned passengers. Medals are awarded for completing levels and for some other tasks, such as destroying every enemy or not taking any damage. After completing all challenges, you can run through the level again on a harder difficulty.

To progress, you’ll need to fulfil a lot of these extra goals. While they could be accomplished in one perfect run, the aim is to repeat the levels and grind out the medals that you need. This gets a little tedious after a while. Once you start re-running levels on the harder difficulty to get more medals this stops being tedious and becomes grating.

The emblems you collect along the way are used to upgrade your ship and power up. Some power-ups are fairly pedestrian like health but additional attacks spice things up a bit. None are really needed to progress. Since there are so many upgrades to grind for, each only improves your ship by a small amount.

It is easy to become invested in the medals you need to progress to the next level or upgrade your ship. However, despite being pretty compelling you’re never left particularly satisfied by Sky Force. While the gameplay can occupy you for a while with its addicting mechanics, it doesn’t give you much of a sense of accomplishment. The experience is pretty typical of mobile games that only aim to keep the user playing rather than entertained.

The overall game package is well-presented. The 3D models for the scenery and music elevate the title quite a bit. However, no amount of thrills can dress up the fairly boring act of actually playing. There is a lack of depth behind the environments that you fly through. While they look nice and the larger enemy ships can become epic in scale, you’re just holding the attack button and moving the ship backwards and forewords. The visual polish seems disconnected to the simplistic mechanics.

The game works a lot better in handheld mode than docked. The gameplay lends itself better to this. It is the type of experience that you’ll enjoy absentmindedly while talking or watching a movie. The original version of this title was free to play on iOS and Android. Frankly, you can tell. The mechanics are designed to hold a player captive to grind up to the next upgrade, but you never really accomplish anything other than moving on to the next target. With a powered up sequel already available on the Switch for the same price, there isn’t much reason to bother with Sky Force Anniversary.

Sky Force Anniversary is a visually stunning game, but it can’t make up for the shallowness of its mechanics. With a superior sequel available on the Switch for the same price, it is hard to justify bothering with this release.