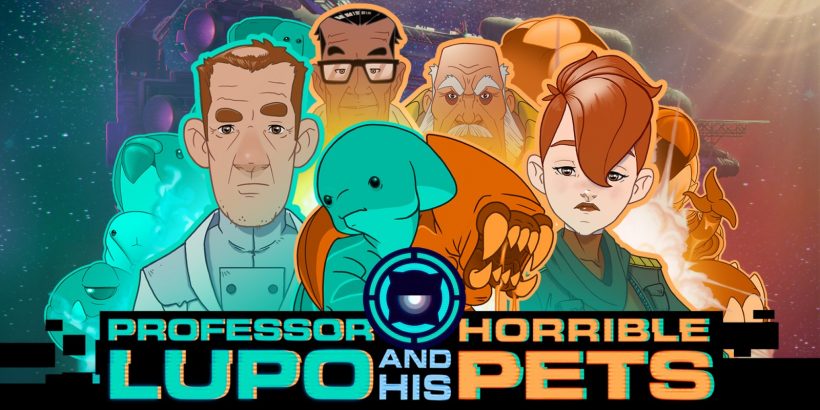 It’s not often that a puzzle game gets you squeezing your butt cheeks and crossing your fingers for dear life, so you’re unlikely to have played many games which are like Professor Lupo and his Horrible Pets.

The spaceship on which Lupo keeps all of his extra-terrestrial creatures is under attack and an enemy overlord is hell-bent on wiping out every soul that was on board. One such soul is Lupo’s intern, who the player controls as he makes his way through the many floors and labyrinths on the spaceship with a few to making it to safety. On the way, the intern comes into contact with other characters who add some personality and somewhat of a storyline element to the proceedings, but the meat and potatoes of this game comes in the puzzle-solving needed to make it from one side of a floor to the exit.

The premise of the levels in Professor Lupo is largely the same. You can use the buttons or the touch screen to interact with the environment, opening doors, releasing enemy-killing gas and igniting that gas into searing flame in order to secure your safe progression through the stage. But the titular pets prove for the game’s problem – they are all out for blood. Some are massive worm-like creatures, others are rolling balls with vicegrip teeth while others are more dinosaur-like in appearance. These enemies vary in their levels of intelligence – some will sense you nearby and head in your general direction and become stuck going round in circles when they find a wall in their way. Others will smell you and follow the smell until they find you, and others will hide in vents and strike when you least expect it. To bypass them, you must either trap them and have them kill each other or let the fire do the work for you, or on the flip side, simply avoid them by making clever use of movement and opening and closing doors.

The irritation is just how slow that the intern moves. You may have figured out a puzzle and the correct order to open all of the doors and to operate all of the machinery, and yet by not moving as quickly as you can you’re likely to get crushed into guts. Enemies will always outpace the intern, and there’s very little room for manoeuvre as far as mistakes go. This can actually be viewed as a positive as it rules out the game being easy once you consult a guide. There is a hint system which comes into play when you die one too many times on a certain puzzle, but the difficulty level always feels like it’s been set at a lofty height throughout.

With a sprightly pace and humour tying the game together, Professor Lupo and His Horrible Pets does feel like it is very well put-together. The atmosphere is strong, and voice acting helps with the immersion too. But you’ll need to invest a lot of hours in order to nail every level while picking up the collectibles. As such, the satisfaction level is really high when you do get them. Movement controls aren’t the best – tapping a spot to walk to it can lead to problems when there are two possible routes and you’re worrying about doors at the same time, and that will add some less necessary swears to your Professor Lupo experience.

Professor Lupo and his Horrible Pets £13.49

Professor Lupo is a good and well-designed puzzler, though some irritations hold it clear of a higher score. The puzzle-solving is satisfying, though some of the controls and the movement could have been done better.