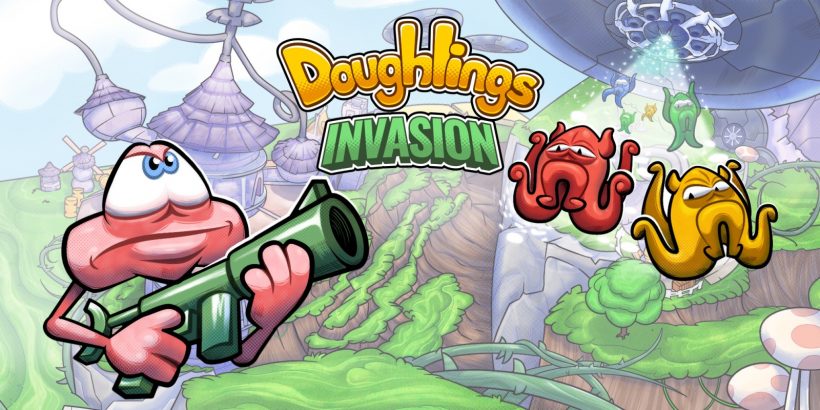 Classics will always have a place in modern gaming in one form or another.

They are the lifeblood of what made gaming great in the days of yesteryear and continue to influence the gaming movement we are seeing today. Indie developers have taken a particular liking to finding these older experiences and giving them a fresh coat of paint or adding on new mechanics to a tried and true formula to spice things up. Doughlings: Invasion is a take on the arcade classic Space Invaders and does these things very well – as long as you were already a fan of the genre, that is.

If you aren’t familiar with Space Invaders, to put it simply, you move from side to side firing off shots at hordes of aliens who make their way down from the top of the screen, slowly moving from side to side themselves. The aliens can fire down towards you, so you take evasive action while trying to pick them off – ah, who are we kidding, everyone loves Space Invaders. It’s a timeless gameplay concept that often imitated throughout the decades, but originated in a cabinet in an arcade.

Doughlings takes this gameplay style and puts its own spin on things. This is the second Doughlings game on Switch after Arcade, and like that game, (unlike in Space Invaders), story is included. Doughlings: Invasion takes place in the peaceful land of the Doughlings, where a meteor crashes causing panic amongst the population, leading to the people to prepare to go to war. Morpheus, the player character, arms himself and begins to take on the alien invaders as they plummet down to his planet.

The added mechanics consist of an upgrade system that allows you to collect upgrade points referred to as “likes” and with them upgrade your abilities and weapons. The “likes” can also be used to activate special abilities during the gameplay itself. The shooting action appears to take place on a sort of TV set, with spotlights coming on as you defeat enemies, allowing you to activate a ‘Show Off’ ability that gives you a powerful weapon. It seems to be a bundle of wacky ideas rolled into one, so players just have to go with it.

There are around a dozen different types of enemies falling from the sky, differentiated by their varying types of attacks or lines of trajectory. Bosses at the end of levels offer a different level of challenge, requiring more precision shooting and posing more of a threat offensively too.

Space Invaders was a classic that people still talk about and play to this day, and will do for decades to come, we’re sure. However, Doughlings: Invasion doesn’t add enough modern flavor to make it an experience essential to be added to your library. The game’s story and its upgrade system are nice additions, but this really just feels like the same old Space Invaders same game from 1978, despite its more contemporary look. This is a game best sold as another arcade leaderboard grinder, with high scores the main motivating factor to keep playing. Of course, there are some people out there who will love nothing better, but for most this feels like it’s been done before.

Doughlings: Invasion offers another modern-day take on Space Invaders on the Switch. Unfortunately, a lack of depth and monotonous gameplay will have you thinking you’d have been better off dusting off an Atari.