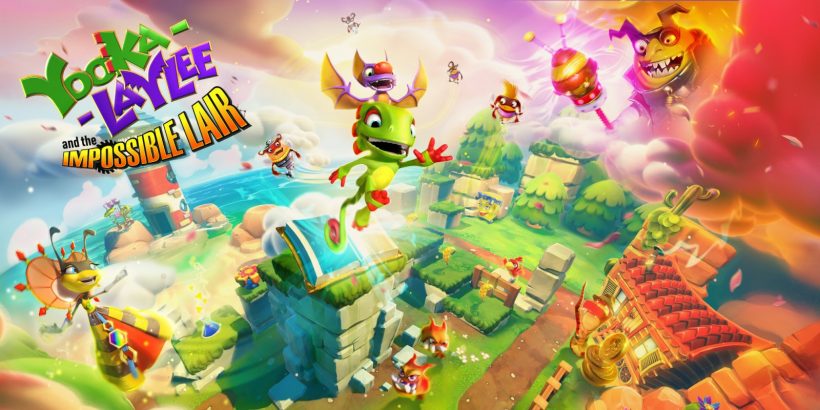 Yooka-Laylee went down well with fans of all formats following its very successful Kickstarter project. This reviewer had to acquaint himself with the original game – which was released in a beautiful N64-esque box by Limited Run Games earlier this year – as part of his preparation for the second title featuring the lizard and bat combination.

But, other than the characters, The Impossible Lair has little in common with its 3D platforming predecessor. While the original was inspired clearly by Banjo-Kazooie, this game, a 2.5 platformer, is more akin to Donkey Kong Country, with vine-swinging, thorns and five collectable coins in each level to be on the lookout for.

The books which act as a portal to each level are back, but this time they are laid out over a Super Mario 3D World-like overworld, rather than the Hivory Towers home of the evil Captain B that players could explore in the first game. It’s an odd feeling, having recently played the first game, booting The Impossible Lair up and finding a game so markedly different. Part of the lust for an N64-era-type platformer like Yooka-Laylee in the first place was that it had become something of a forgotten, or at best underused, genre, which certainly cannot be said for the 2D or 2.5D platformer.

But Yooka-Laylee and the Impossible Lair is a competent, difficult and engaging 2.5 platformer which may just come up to the mark set by Donkey Kong Country. Where tapping Y in the first game would engage a spin attack that that could take out the majority of the bad guy minions in the game, you’re much more likely to get into trouble for overusing it here. Unlike before, enemies can be defeated by stomping on their heads, as is pretty much the law for games of this type, but the margins for nailing a precise jump onto them are very fine indeed.

The ghost writers, a key component of each level’s collectathon in the original, are back but in a new form. Rather than having to find a way to capture them, they must instead be chased through the level as they leave feathers in their wake, with the feathers needing collecting for a bonus payoff of more feathers once you’ve had them all.

This of course creates a sense of urgency to the levels, though they aren’t timed, and can lead to quite a few unnecessary deaths for careless players who don’t spot an incoming spiky enemy or one of the infuriating sheer drops in time. But, the ghosts have nowhere near the personality they managed to convey before.

Deaths are handled differently here too. Rather than the butterfly system, which could be added to to increase health, getting hit once sends Laylee into a panic, and means Yooka has a small window to collect his friend, who often is either just out of reach or has flown into a particularly precarious area, forcing the player to make a decision on whether it’s worth rescuing her. But failure to do so will mean the slightest nick will result in Yooka’s death and a frustrating shift back to the last checkpoint.

Overall, Yooka-Laylee and the Impossible Lair is a good 2.5 platformer, for sure, but it certainly isn’t as good as its 3D predecessor. It lacks personality, and doesn’t have quite as much a sense of exploration and wow factor – but fans of 2D Super Mario and Donkey Kong fans will love it.

Yooka-Laylee and the Impossible Lair £24.99

Yooka-Laylee and the Impossible Lair doesn’t have the charm of the original game, but it is a very good 2.5 platformer. Remember that this is a spin-off and not a sequel and you’ll enjoy yourself more.