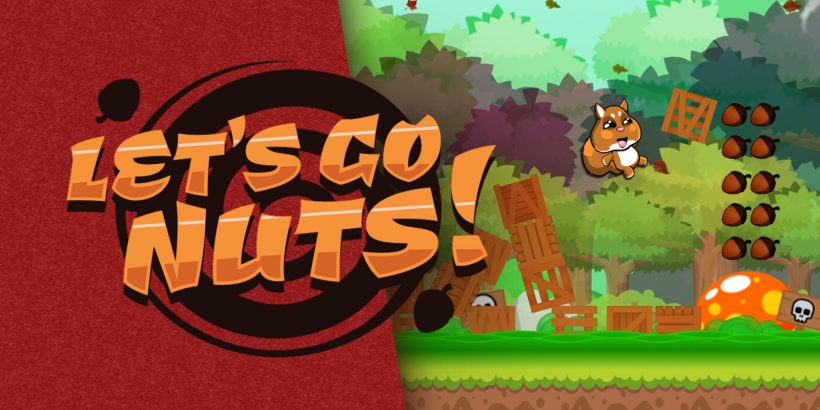 At this point, seeing a game that looks like it would be at home on mobile making the cross over to Switch is something that fills this reviewer with dread.

These sorts of games are usually synonymous with basic experiences that offer little depth, particularly so in comparison to their console equivalents. But, every once in a while, one of these games comes along that brings with it a unique or novel idea, making it stand out from the rest. Angry Birds did that with its use of physics, meaning you could manipulate the landscape by striking towers of blocks to scatter them across stage; Let’s Go Nuts uses something similar, and it actually works.

Let’s Go Nuts is a simplistic platformer – nothing out of the ordinary, and there’s a bunch of that sort of fodder filling the eShop at this point. But the squirrel you control can ascend towers of crates to reach higher platforms, or collide with the towers to watch them barrel over and spread across the environment. Thus, these crates form bridges or ramps across previously inaccessible gaps, or are precisely knocked into specific spots as to then be able to reach the collectable sparkling nuts (yeah, you heard that right), of which there are three in every level.

There’s a tactical element to your command over these block towers. If you knock down the tower too soon, you might not be able to reach an area up above where a sparkling nut is placed. At that point, simply hurling yourself off the level to return to the last checkpoint won’t help, as while you do continue from that point, the block towers will remain demolished exactly the same as you left them. Nope – you’ll have to exit the level entirely and start from scratch if you want to finish a level with all three performance stars. This feels like a weird design choice, as it makes the checkpoints useless at times.

Other than the block maneuvering, this is a pretty standard platforming fare – jumping across gaps and on top of enemies’ heads, and remembering not to hit enemies from the side. There’s very little by way of story, with a short comic strip explaining the change in environments from one world to the next.

For that reason, the good work done by the gameplay idea of smashing blocks all over the place is almost evened out by a lack of character. After all, this is a game which looks very much like a mobile title, with very little detail in the sprites or the backgrounds. This is probably a game which might be better remembered for its potential than for its execution, as the lack of delivery on the fronts other than its gameplay ideas is disappointing.

Let’s Go Nuts is by no means a particularly long game, with four worlds split into ten levels apiece, with no boss battles of any kind. Nor is it difficult – you will rarely find places where you become unstuck, as all enemies can be defeated with a simple jump or two onto their heads. A multiplayer mode follows the same gameplay style, albeit in co-op, and players will have to keep time with each other so one doesn’t end up washed away off-screen.

With a mute main character and levels which lack the charm or personality that make Super Mario Bros. and other good platformers as memorable as they are, it will quickly be forgotten in today’s crowded eShop climate.

Let’s Go Nuts shines with its gravity-based gameplay, but does so in few other aspects. As a result, this one’s going to end up forgotten, which is a shame, because the potential was there.