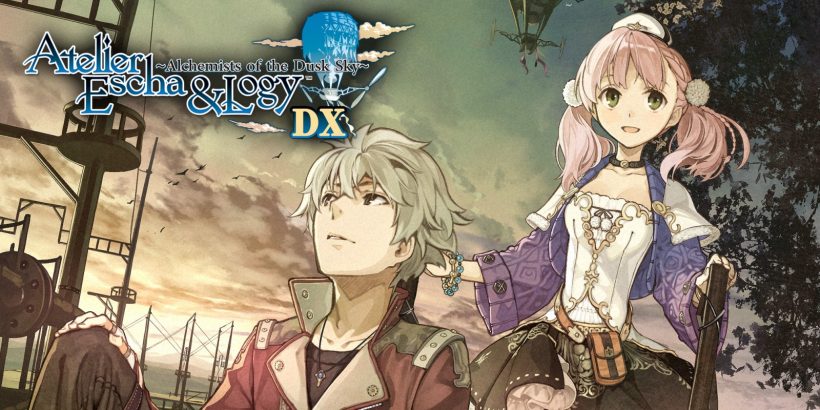 I’m starting to understand that most Atelier games, at their core, are quite similar. The second release in the recently shipped Trilogy Pack, Atelier Escha & Logy: Alchemists of the Dusk Sky DX takes you on a journey set in the same world as Ayesha, and with many of the same mechanics. Between the combat, crafting, and exploration, you might as well be seeing double, but the crucial thing that Escha & Logy does is improve on some of those major gripes I had starting with Ayesha. Perhaps they took the feedback from the original release and made some user-friendly changes, but it is also equally possible that I simply have played an Atelier game now and understand how things work a bit more.

This tale begins in the city of Colseit, where titular characters Escha and Logy work for a research division utilising alchemy. A strange ruin lies floating in the sky above this town and that mystery is only one of several things your department is looking into. As a whole, this story is as serviceable as that of Ayesha, but Escha & Logy’s opening sequence gets way too long in the tooth. From reading reports and updates to your work life, as well as the introduction to the characters, you will spend several hours playing before the threat of the game is even introduced. Once ploughing through that, however, you should have an enjoyable time with the story.

One positive is that part of the reason the opening is so lengthy is due to an increase in the tutorials. I still felt there should have been a bit more help in the tedious alchemy sections, but whether it was because of my time with Ayesha or the new tutorials, I found the alchemy way more enjoyable here. Alchemy continues to be the shining star for this series of titles, and with a deep crafting system, this is one that players can sink tons of time into. Again, if this is your first entry into the series, it will be quite the learning curve for you, but I felt better coming out of this title than I did in Ayesha. Combat stood out more strongly in this go-around. Even as basic as it is in terms of JRPG gameplay, I liked setting up combos and properly having my squad attack as a team. Hardcore fans will probably think this is entry-level combat, but that worked perfectly for me.

My biggest issue with these titles returns in the time management mechanics. Being presented a large open world and having the game force you to pick up the pace and skip past portions to save time is horrible. However, this title feels a bit more patient and relaxed than Ayesha. Another positive here is that having two main protagonists — each of which can be picked for different stories — means that if you fail to complete the game in the time allotment, you then can return as the other.

Atelier Escha & Logy: Alchemists of the Dusk Sky DX is an improvement on Ayesha in several ways, but still offers a lot of the main issues I brought up in my first review. You still have to fight the clock, trial and error a lot of the alchemy, and have characters that aren’t all that great, but if you want to get into this series this offers a better starting point, even if it’s the second game.

Atelier Escha & Logy: Alchemists of the Dusk Sky DX is an improvement over the first installment in the Dusk Trilogy, but still implements the time management mechanic that hampers the exploration immensely, which goes against most of what the game is about.