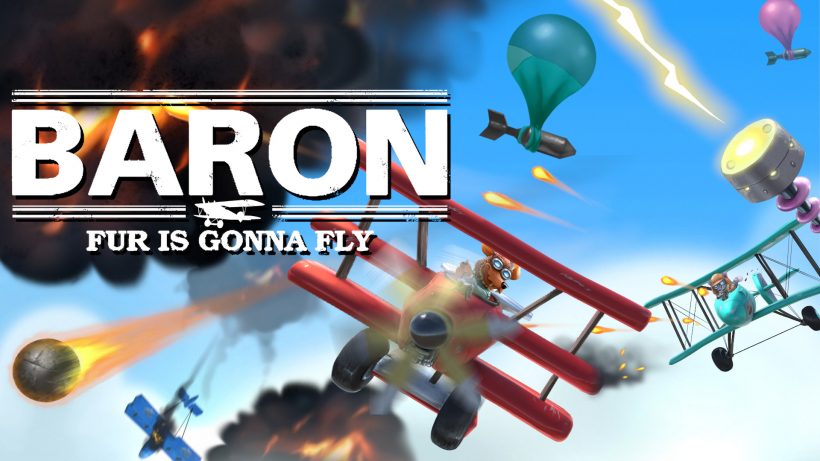 As someone who is missing playing Nintendo party games with a group of friends, I’ve been spending lockdown finding new titles for us to play at our inevitable reunion.

Baron: Fur Is Gonna Fly is an interesting party game that flew under many Switch owners’ radar upon release, but it ultimately fails to impress. In a time where anthropomorphic animals are all the rave with the release of Animal Crossing: New Horizons, Fur is Gonna Fly perhaps struck gold with its choice of pilots, letting you pick between eight different animals to control World War I era planes to engage in literal dogfights with.

These main battle modes take place in a Super Smash Bros–like style, letting you choose between a point-based or a stock-based match. You can destroy opposing planes by reigning bullet-hell down on them, or opt for a more chaotic approach with your special weaponry. Aside from the standard modes, there are additional party games including a coin battle mode, a paint battle not too dissimilar from Splatoon‘s Turf War (except in the sky), and ‘Capture the Cow’.

At the end of each round, players are given the option to upgrade one of their statistics, allowing you to home in on your strengths, or protect your weaknesses (which for me was controlling these planes), while also selecting a new special weapon to use.

These special weapons, my favourite of which was the anvils that rain down from the sky, do add some much-needed fun to the dogfights, as without them it can be quite hard to actually down enemy planes. As easy as it would be to blame this on my own gaming ability, the control scheme does take some getting used to, despite its initial simplicity. Turning especially proved unforgiving in Fur is Gonna Fly, with Dogmelon Games initially opting for the ‘up means up’ control scheme rather than the industry-standard inverted controls for piloting planes. Luckily, there is the option to change the control scheme to the more traditional setting and avoiding embarrassing yourself by crashing straight into the ground below.

Even when I grasped the controls, Fur is Gonna Fly makes it difficult to use your plane as it is quite hard to tell where your plane is. In the larger maps, in particular, the planes are incredibly small, and when you throw in seven other pilots, all targeting you with bullets, black holes, and banana skins, it can be tricky to play the game properly.

Where Baron: Fur is Gonna Fly excels is in its soundtrack. Each character has their own original song in the ragtime style popular during World War I, and the songs are actually quite catchy. These songs can be played on their own in a separate section, allowing you to listen along to instant classics such as ‘Nobody Likes The Snake’ or ‘Please Don’t Hit Me With The Ram’ that you will soon find yourself humming along to throughout the day.

Aside from this jukebox feature, however, there isn’t really that much more Fur Is Gonna Fly has to offer. The extra single-player mode that sees players taking down an endless herd of flying sheep fails to expand on any of the gameplay elements, and with no option for any online multiplayer, I couldn’t recommend this game for anyone who is missing their Player 2 due to lockdown, especially for the price of £18.

Baron: Fur Is Gonna Fly fails to capitalise on the initial charm of its characters and soundtrack, with players likely to tire of the somewhat simplistic gameplay after just a few rounds. With a few more tweaks and better plane visibility, Dogmelon Games could have saved this title from a crash landing.