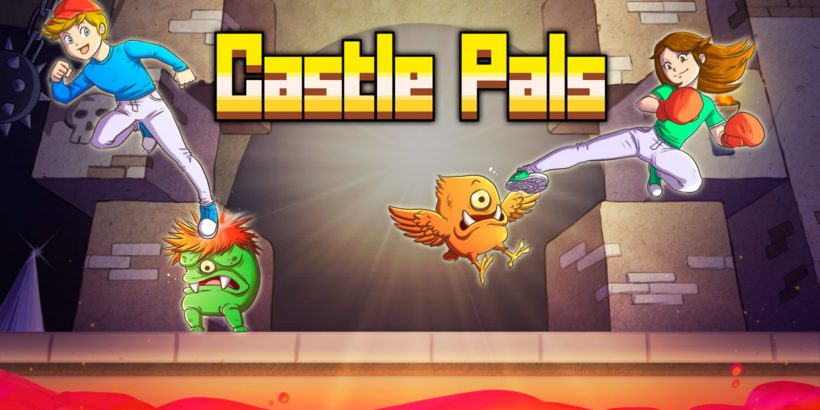 I have an unabashed weak spot for indie platformers. Castle Pals, a game you’d think would play into my love for this genre, should have ticked all the boxes, but it only managed to generate mild pangs of icky frustration. From the finicky hitboxes to the abhorrent sound effects, the game fails to stick what should have been a very easy landing. It certainly looks good and handles well, but even my never-ending love for underdogs couldn’t help me to overlook this platformer’s shortcomings.

Let me pull a little kiss-and-kick by stating that Castle Pals handles remarkably well. Navigating the stages as each of the game’s two characters feels nice and responsive. What’s more, their respective skills make them wholly distinct; learning how to navigate the world as the little guy with the propeller hat feels remarkably different than clobbering monsters as the girl with all the martial arts training. And I loved how you alternate between the characters, as it allowed you to get a genuine feel for their strengths and weaknesses in equal measure.

Additionally, Castle Pals looks quite good. The pixel artwork, while not earth-shattering, serves the concept rather well. The ‘camera’ feels a little too zoomed in at times, which can make some of the platforming a little tricky, but this perspective also gives you an excellent chance to take in the quality of the work. Even as the next generation of consoles promises to push realism in video games to another level, I still have a soft spot for the colourful comfort of a well-constructed pixelated world.

So, where does Castle Pals fall apart? It all boils down to presentation. As good as it looks and as smoothly as it handles, the game is just kind of… there. Castle Pals’ setting feels wholly uninspired and fairly routine; you’ve probably traversed more memorable castles in countless other platformers. As such, boredom sets in after the first handful of stages. And while the challenge ramps up in later levels, the stages fail to leave an impression. It’s the equivalent of a fast-food meal: as soon as you’ve finished noshing on it, you still feel hollow and hungry.

It’s worth noting that I don’t necessarily have a problem with generic, by-the-numbers video games. In fact, sometimes you just want to kick back and enjoy a title simply because you know precisely what to expect. However, Castle Pals undermines its simplicity by failing to give the experience the polish it needs. Hitboxes, for example, seem finicky and inconsistent. Landing a jump-kick often resulted in the death of my adorable adversary, but sometimes it would kill my heroine and send her back to the beginning of the level. When you’re racing against the clock to get top honours on a stage, the last thing you want to worry about is hitbox inconsistency.

Last but not least, Castle Pals features some of the worst sound effects I’ve ever heard on the Switch. Anyone who remembers the sounds screeching from the internal speakers of their PCs from the 90s will know precisely what I’m talking about.

Castle Pals, while adorable, misses the mark. And for some reason, the fact that it fell short of the goal irritated me to no end. I truly wanted to enjoy my jaunt through this pixel-art castle, but in the end, I couldn’t wait to shut this off and play a platformer that effortlessly nailed the execution.

Castle Pals looks great and handles wonderfully, but it’s an ultimately forgettable experience that does nothing to set itself apart from other platformers. It’s also a game best played with the sound turned off.