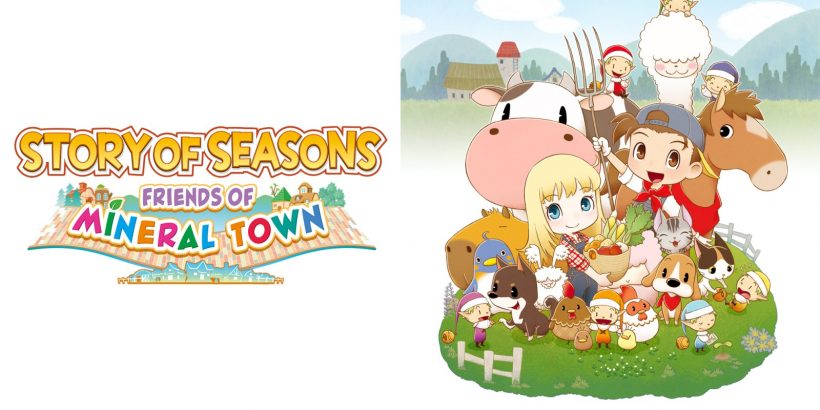 It seems as though you can’t go a month without news of another port, remake, or remaster coming to the Nintendo Switch. As we’ve seen time and time again, there’s a huge market for the hits of yesterday, and this time it’s a fan-favourite from 2003 which has received the remake treatment.

STORY OF SEASONS: Friends of Mineral Town is the remake of the Harvest Moon game of the same name, a classic farming simulator that sees your character inherit a farm from their grandfather before moving there to start a new life. This premise and many of the mechanics are likely familiar ones if you’ve ever scratched the surface of the farming sim genre; you spend your days tending to your crops and livestock, foraging for ingredients in the mountains, befriending the townsfolk, and digging in the mines, all in an idealised depiction of country life that offers all of the routine but none of the dirt under your fingernails that comes from, y’know, actually running a farm.

Gameplay soon falls into reliable rhythms depending on how quickly you can get a grasp on the central mechanics. Here Friends of Mineral Town feels a little different to something like Stardew Valley, for example; whereas in that game a central questline provides some more explicit direction for what you’re meant to do, Friends of Mineral Town largely lets you take life at your own pace and see where it will take you.

The flip side, of course, is that sometimes it can be unclear exactly what you have to do to progress the story or uncover certain secrets if you’re not already familiar with the game, but exploring every nook and cranny, establishing the routines of everyday life, getting to know the townsfolk, and building up your farm is such a pleasant process that even if it takes you a bit longer than you wanted to work out how to do something like get a pet, for example, it doesn’t feel like the major loss it might in some other game. When you do eventually stumble upon something new, it feels special in a way that games with more explicit structure can sometimes be missing.

Beyond running your farm, a significant part of the game centres around your relationships with your neighbours. Despite each character’s heavily recycled dialogue, getting to know each resident of Mineral Town is a truly enjoyable process, and this is quite doable with the number of NPCs in the game. There are enough characters that the town really does feel like a small, self-contained society, but not so many that you can’t get to know everyone and see how everyone’s lives intertwine. And of course, while it’s always going to be a bit problematic when a game’s relationship mechanics are fundamentally transactional as is the case here, the ability to romance and marry any eligible character regardless of your gender or theirs is a welcome change that makes the experience much more inclusive and immersive.

The game is simply gorgeous, with updated, stylised visuals replacing the pixel art of the 2003 release but losing none of the charm. The music is similarly bright and cheery, and although the soundtrack can get quite repetitive by the end of the first season, after a certain point in the game it becomes possible to set your own music from an impressive selection of tracks. An improved user interface, extra content, and various quality-of-life additions such as a visible stamina meter and the ability to walk over your crops go a long way to helping iron out some of the hitches of the original as well.

Not all of the changes in this version are improvements, however. A couple of glitches around how animals interact with the world and with each other can make it frustrating to take care of your livestock at times; dismounting your horse will similarly prove impossible if you’re too close to some obstacle, even if that’s just on one side, and this can feel quite arbitrary if there’s endless space on the other side of you as is often the case.

All in all, though, the handful of issues present are minor blemishes for a game that puts extra polish on such a well-loved classic. It’s remarkably easy to sink into the routines of daily life on the farm, and these rhythms provide a familiarity and comfort that is particularly welcome in our uncertain and rapidly changing global circumstances. For those who played and loved the original Harvest Moon release, STORY OF SEASONS: Friends of Mineral Town will be imbued with nostalgia. For those visiting Mineral Town for the first time, the game is sure to delight, just as it did when it first released seventeen years ago.

With moreish gameplay, charming characters, more inclusive romance options, updated visuals, and a smattering of quality-of-life improvements, STORY OF SEASONS: Friends of Mineral Town polishes up a definitive farming sim classic to bring it into the modern era.