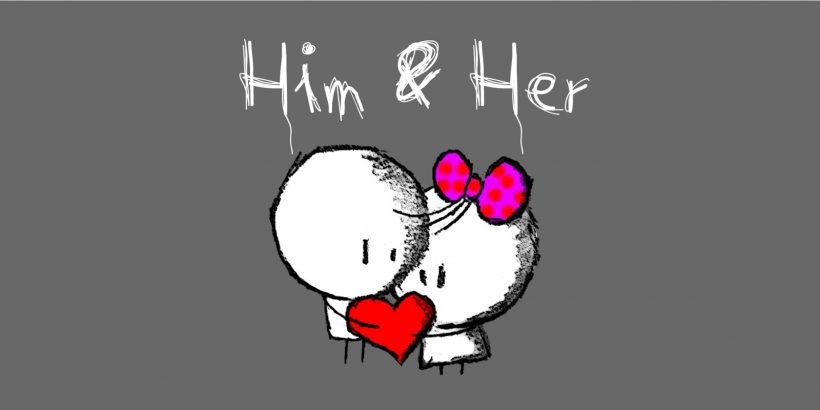 In an oversaturated marketplace, indie games need to do unique things in order to stand out among the crowd – especially when it comes to the most common genres. On the eShop itself, there are so many platformers (which includes a great number of amazing games), that it gets harder and harder to decide what to play next. Among so many options, Him & Her even tries to provide a different experience. Unfortunately, though, its unique premise gets overshadowed by a lacklustre presentation and some technical shortcomings.

With a kind of Super Meat Boy-esque structure, Him & Her presents a total of 68 bite-sized levels in which you must take your main character (him) all the way to his love counterpart (her). Reminiscent of the relation between Meat Boy and Bandage Girl, although the unique aspect of Him & Her lies on its gravity-changing gameplay.

On the most basic level, Him & Her works like a conventional platformer. You can use the left stick or directionals to move your character from a sidescrolling perspective, and at any time you can press B to jump. However, when not jumping, you simply walk towards the borders of the platforms, and the whole level will rotate accordingly to the direction you’re moving towards. It may sound a bit complex at first, but it is, in fact, a simple concept that you learn in a very straightforward way. Instead of “falling” through the endless pits, what happens is that the whole level (and gravity) will change.

On top of this basic concept, Him & Her will slowly present new mechanics and concepts to make things more challenging. During the first levels, you simply need to change the perspective to reach Her. Later, in the more challenging moments, you’ll need to do lots of different things like reaching levers to activate hidden platforms, dealing with moving platforms, portals, spikes and other kinds of hazards. You can even tailor the game’s challenges to your skills because it offers normal and hard difficulty setting.

Unfortunately, though, the difficulty in Him & Her is also affected by some infuriating technical problems. First of all, Him & Her doesn’t offer the most precise controls. Different than games like Super Meat Boy or Celeste, in which you feel like having total control over your character at all times, Him feels floppy and floaty. In addition to that, the game suffers from certain collision-detection problems. If you’re not careful, spikes, floating platforms, and other elements can kill you from distance. At least, when you die, the game reloads the level instantly, allowing for a quick new attempt.

On the presentation department, Him & Her also leaves plenty to desire. It follows a minimalistic art that features mostly back and white elements. In a way, you could compare it to a small-budget LIMBO. However, everything in the level has the exact same colour pallet, which gets repetitive very quickly. The soundtrack is also kind of bland, which leads to a monotone experience – literally.

When compared to other platformers, Him & Her is definitely a game within a budget. After all, it costs only 89 pence. Yet, despite the low entry cost, Him & Her comes with so many little annoyances that even its somewhat-unique premise gets overshadowed by these problems. There are many better platformers available on the eShop.

Him & Her is a cheap platformer that could be worthwhile thanks to its different gameplay mechanics. Unfortunately, a bland presentation and some technical problems get in the way of your further enjoyment.