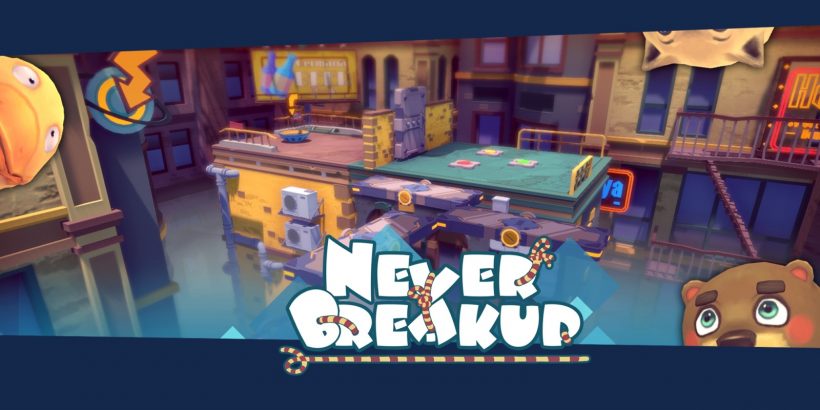 It’s a good year for multiplayer games, with many of us looking for fun activities to share with our family and roommates beyond UNO and existential dread. Well here comes Never Breakup, a fun co-op title where two strangely round animals are tethered together, and you must coordinate your actions, along with the rope that connects you, to traverse platforms and solve some light puzzles. So is this title the perfect match for the Nintendo Switch? Or should you keep swiping through the eShop…

Never Breakup is a cute puzzle platformer and to get through each level you’ll either be co-ordinating with your teammate or controlling animals on both ends of the rope in solo by swapping between the two. Regardless, the fun of the game is found in the chaos caused by the wobbly physics of either creature and the desperate attempts to wrangle them to do your bidding. Levels will throw at you some moving platforms, spiked obstacles and a few roaming enemies at the start, which can all be fairly well avoided with a bit of skill and some luck.

While the levels are all fairly simple, the controls never feel quite tight enough. Despite it being fairly funny, a lot of the deaths we experienced didn’t feel particularly fair. Instead, we threw ourselves at puzzles repeatedly, quickly became frustrated when it felt uncertain if the physics would actually respond as we hoped. Level design is also quite sparse, with even later levels feeling a little too spread out and with very little to do in between. When it works, however, it was great fun working with pals to defeat enemies, activate platforms and solve puzzles.

Multiplayer is strictly local, but considering the amount of communication needed to reach platforms and solve puzzles, that makes a lot of sense. It works well with friends and got a few hearty laughs out of us, but sadly it became much more frustrating in single player. Swapping between the two characters is easy enough but trying to manoeuvre both to solve puzzles was often absolute agony. Despite the ability to swallow the other animal and move around as a single large animal, many puzzles still require a level of planning and precision between the two animals that are simply too much to do on your own.

In each level is a series of coins scattered throughout, and as well as adding an extra challenge these help you to unlock cosmetics. The weird and grotesque animals and accessories you could find were great, but it costs a whopping 150 coins to unlock them, and even then it’s annoyingly a random drop. Each level also has a particularly well-hidden noodle bowl, which are able to be spent on multiplayer minigames. These allow either 2 or 4 players to go head to head in a series of competitive matches. These are a great addition and added a lot more replayability to the package, however, they weren’t quite interesting enough to hold our attention for more than a couple of games.

Ultimately Never Breakup is a fun, quirky co-op game that many families would have a blast playing, with a decent selection of unlockables and modes. But beneath the surface, you might start to notice the lack of polish in a few areas, and it probably isn’t worth the money if you’re planning on playing alone.

With plenty of levels and modes, as well as a recipe for some hilarious gameplay, there’s a lot to like with Never Breakup. However, it’s missing a lot of the polish that would make it an easy recommendation, and it definitely isn’t worth your time on your own.