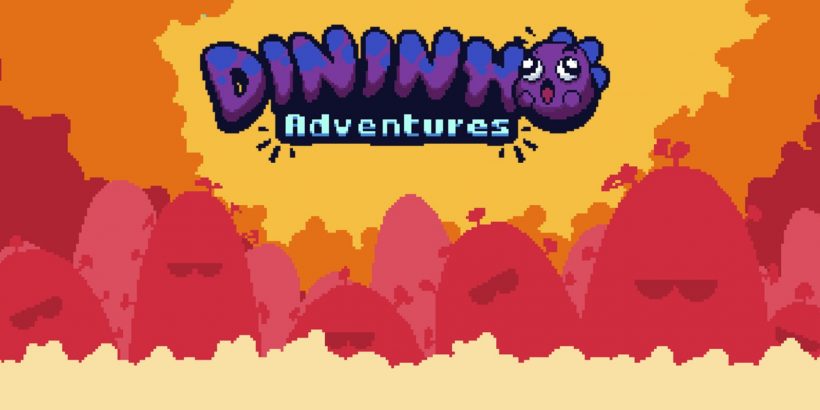 It feels that the Nintendo Switch can really hold experiences of all kinds and sizes. From gigantic open-worlds with 100 hours of content to bite-sized indies that can be finished in a single hour, there are games for all types of players. Dininho Adventures stands as one of the most accessible experiences; a kind of game that can be equally enjoyed by people of all ages, if, of course, you enjoy a classic platformer experience.

The premise of Dininho Adventures would feel at home on any old-school platformer from the NES or SNES era. As you’ll learn from the short introductory section, someone has stolen all the eggs from a dinosaur mother. In an attempt to help, Dininho (which means “tiny little dinosaur” in Brazilian Portuguese) steps in, and goes on his grand adventure, trying to recover all the eggs he can along the way. This journey takes Dininho through four different worlds, each with five levels.

Within each one of these worlds, you’ll find different types of enemies and hazards. Dininho’s move set is quite simplistic, restricting you to things like walking, running, and jumping. With this (and the ability to attack enemies with your tail), you must overcome the obstacles you’ll encounter within the very linear levels of Dininho Adventures. At certain moments, you can take a few detours here and there to collect additional eggs, but that’s as far as it goes. Overall, Dininho Adventures is a simplistic old-school adventure in the style of classic platformers like the first Super Mario Bros.

Just like the name of the game’s hero, Dininho Adventure is a decidedly wee side-scrolling platformer. If you’re a completionist, you could extend the adventure a bit further by trying to collect every single egg, as well as locating hidden items on each level, which are used to unlock a fifth, secret world. Even then, Dininho Adventures doesn’t offer the same longevity as other platformers, which isn’t really that bad when you consider its low entry price of £1.79.

Despite its short length, the gameplay of  Dininho Adventures is solid throughout the whole adventure. The controls are responsive, and the levels have a steady difficulty curve. You can find a few weird spots, especially on levels with automatic moving platforms or vehicles. At certain segments, the auto-scroll can go faster than your jumps can reach, leading to some unexpected deaths. Thankfully, these are very brief segments and don’t ruin the experience as a whole.

The aspect that Dininho Adventures really has working to its favour is its presentation. The game features a kind of 16-bit inspired pixel-art style, which plays with a vivid and vibrant colour pallet. Each world has its own aesthetic, which include things like forests, caves, mountains, and more. The only complaint I’d have with Dininho Adventures’ visuals is that, at times, some elements from the background can blend with the environment, especially in the caves, where it is hard to distinguish certain sprites. While not extremely remarkable, the game’s soundtrack also does a good enough job in creating an atmosphere in each one of these distinct worlds.

As a result, Dininho Adventures stands out as a cheap option for a competent enough platformer. If you have already played and enjoyed other examples of the genre, then it may be worth spending your gold coins on this little prehistoric adventure.

Dininho Adventures is a short side-scrolling platformer that can be enjoyed by gamers of all ages. With a pleasant pixel-art style and solid gameplay, it may be a worthy option for a low budget adventurer.