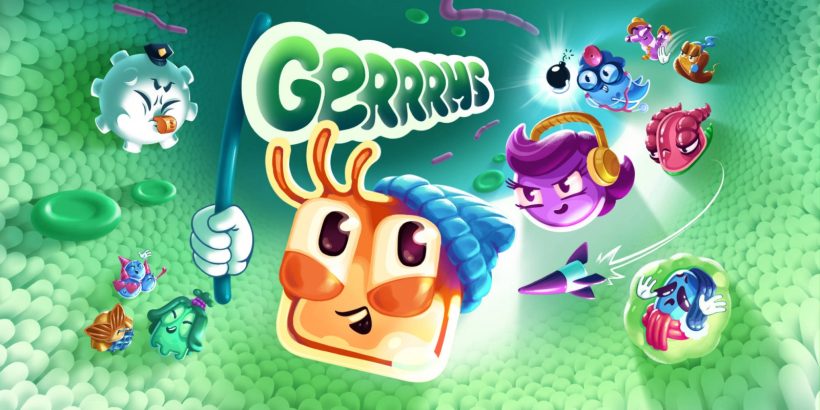 We suppose it’s pretty fitting that during the throes of the worst virus in living memory, Gerrrms, a party game filled with bugs of the contagious kind, is here to try to satisfy our multiplayer cravings.

Bugbomb Studio’s arcade-style fighter has you pick from a range of microbes to take on three others in a multitude of different mini-games. While the method of winning is different for each of the modes you can select from, the core gameplay remains the same: float in any direction on the screen and try to deal damage to the other players or collect items, all the while using a series of points dotted around the field to latch onto and swing around, elastic-like, before letting go to alter your direction. It’s a very simple gameplay style, and it’s quite impressive just how many game modes the developers have managed to conjure out of it.

You might be making use of one of a number of different weapons, for example. That might be a simple punch (quite where the fists manage to appear from is anyone’s guess). It could be a slimy bubble which, if it engulfs one of your opposition players, slows them down and limits their control capabilities. You might even be able to fire a rocket, which doesn’t quite home in on its targets but does curve in a slightly unpredictable manner for causing that little bit of extra mayhem.

Otherwise, you’ll need to do damage to your opponents by other means – a pass-the-parcel-style bomb-based game eliminates one player each time the bomb goes off, and allows each player to sparingly use the B button to hand-off the bomb when within arm’s reach of an opponent. With some power-ups, you can slam opponents into dangerous spikes at the side of the field, and you can even unlock modes which have your Gerrrm sprout its own spikes for some lethal damage.

There are non-lethal games too – Gobble mode has players scrambling to collect enough food to fill a meter, while Flag mode works similarly, rewarding players for keeping possession of a flag by raising the meter’s contents. However, while the game has a lot of modes in premise, the general feeling throughout is that there really isn’t all that much variation going on. After all, there is only so much of swinging a blob around on a short field of dots that you can realistically persist with. You’re unlikely to want to play the game’s main Tourrrnament mode more than twice in succession.

Fortunately, there is Mission mode: a mode which tasks players with individual targets as missions. You may be asked to use missiles on every other player, hit a player within three seconds of him grabbing food or even the more miserly ‘win a Deathmatch without losing a life’. This is, perhaps surprisingly, a mode with more longevity than the Tourrrnament mode, as it’s something that implores players towards pursuing a 100% level of completion.

The last Gerrrms mode to talk about is the Custom Match, though it requires little coverage – this mode simply allows you to choose which game mode to play, rather than the randomised selection that takes place in the game’s signature mode. Ultimately, that leaves Gerrrms feeling a little short of its marketing promise that the single-player mode would ‘keep you hooked for hours’ – and it’s a short-term success if you have your friends around.

Gerrrms is a pretty unique party game based upon swinging around points on the battlefield to change direction. Despite numerous game modes, everything feels rather similar, though. It’s not a long-term success.