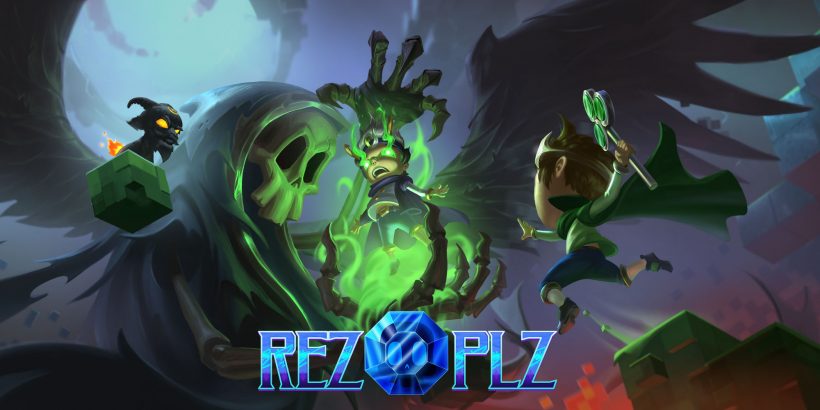 It’s a fact of co-op gaming – where a game allows you to kill the person you’re supposed to be partnering up with, that’s the thing you’ll want to do above all else.

Think back to Snipperclips. Nintendo’s Switch launch day puzzler was released with the intention of encouraging players to team up and make precision cuts into each other’s character in order to perform a wide variety of tasks, but players ended up taking far greater pleasure from just running across the stages and chopping everyone else up to the point where it looked like they’d just been the shredder.

REZ PLZ is another game which places its focus on co-op multiplayer, with the ‘Rez’ of the title being an abbreviation of resurrect. When one player dies, the other will have the chance to hit a button to resurrect them, but this is limited to the number of resurrect tokens (or Lazarus stones, as the game calls them) that the player is carrying at the time. You can’t get through the game without having to resurrect your partner, either: puzzles make use of dying as a completion mechanic, with one player needing to impale themselves on spikes so the other can hop onto their carcass and use it as a safe platform to the other side.

You also have to work together in other ways: one player could need to step on a switch to have a platform lower into a position from which the other player can use it, or in order to reach higher areas one player can position themselves for an alley-oop in order to produce a higher level of elevation than would normally be possible from a standard jump.

You can play this alone, using the X button to switch between the two characters, but as you’d expect, that experience just isn’t the same. You’ll have to move both characters individually through the level, effectively having to negotiate a lot of the areas twice.

The game sure does have a lot of levels, which are all listed in a fairy-tale book-like presentation at the game’s opening. A little story gets things under way and introduces the resurrection mechanic, and then you can simply work through things level-by-level. That’s easier said than done, however, as while the platforming feels competent, it sure does also feel repetitive despite the introduction of power-ups as you continue through the game.

Character models in REZ PLZ feel somewhat reminiscent of the kinds that you’d see in any standard RPG, though the pixel art is done well throughout the game. It’s never better than for the game’s boss characters, though – while you may not remember them forever, playing on the TV screen does cause them to be something to marvel at. The one thing remarkable about the game’s sound is that it is so unremarkable. Instead, the game attempts to generate a personality for itself with the slightly boundary-pushing dialogue. It generally tends to miss the mark, however, held back in no uncertain terms by the game’s lack of voice-acting.

REZ PLZ takes an interesting gameplay idea – that being a co-op game where one player must die in order for their partner to continue, before being resurrected later – but the potential of the idea feels largely under-delivered. Yes, there’s a satisfaction in just hurling yourself towards spikes knowing it won’t hamper your progress, but there are a lot of other ideas which could have come from that genius concept.

REZ PLZ works with a clever idea of deliberately sacrificing a character so the other can progress, but that idea doesn’t really get fleshed out. Elsewhere, the platforming is competent, but nothing you’ll remember long after playing.