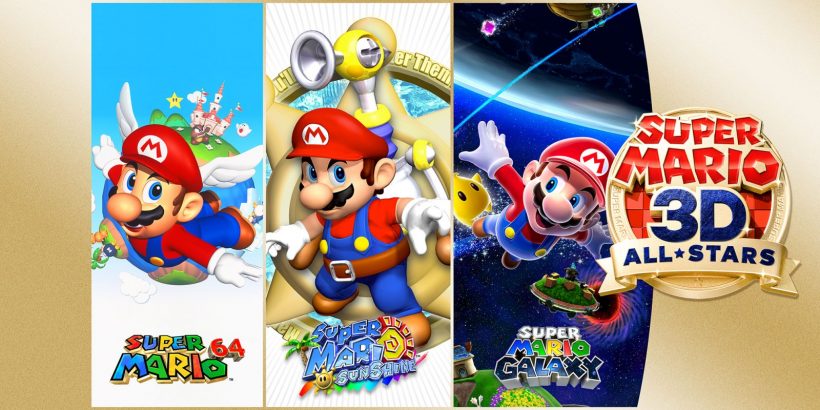 For those of us with experience of 2D Mario from back in the day, the 3D series can feel like something of a novelty, particularly if we missed out on any of them the first time around. This compilation arrives in a very different context to the original Super Mario All-Stars which contained Super Mario Bros. games from just one console, not three.

Alongside Super Mario Odyssey, the Switch’s primary Mario release, the three titles packaged here provide us something of a greatest hits package. All that’s missing are the more restrictive 3D World & Land titles, and Super Mario Galaxy 2, which, although some fans may be disappointed, mostly serves up more of the same.

Aside from the graphical and mechanical changes intrinsic to the new dimension, the 3D series made some fundamental gameplay changes, too. Some elements were dropped, others tweaked, and plenty of groundbreaking additions came along for the ride. On paper, the removals sound stark: in 1997, could fans really have expected a Super Mario game without power-up mushrooms or Yoshi? How about the relegation of block-breaking or landing on enemies’ heads to a far less significant role?

Much like Dorothy’s transition from the sepia world of Kansas into glorious Technicolor Oz, Mario’s arrival into a whole extra dimension heralded a new direction for an entire medium and industry. Yet the act itself was — for Mario himself, at least — every bit as mundane as stepping through a door, emerging through the same green pipe familiar from twelve previous years of adventures.

The first thing that will no doubt strike players new to this game, and maybe those who last played it in the nineties, is the graphics. They’ve certainly been sharpened in the upgrade to 720p, but although they were cutting-edge at the tail-end of the twentieth century, these visuals haven’t exactly aged well, unlike the man himself.

For a start, Mario is looking a little angular. Textures are often either very simple or very blurry — or both — and draw distance is often distractingly short, making some targets difficult to spot in the distance. Combined with the lack of maps, this makes some areas difficult to navigate.

However, let’s not get too hung up. Put the initially jarring visuals to one side, and take the time to explore the Mushroom Kingdom and Peach’s Castle in all its open, sprawling glory. It’s an inviting, tantalising introduction and there’s no Goomba around to pop up and spoil the party.

Once inside, the castle is revealed as a hub world. A set of paintings act as portals to individual levels and the world map has been reborn. This one detail might be the single defining feature of all three titles present in the collection. These Super Mario games are no longer about strict linear movement from one level to the next, although progress is cleverly controlled via the Power Stars waiting to be discovered. By gradually making more destinations available, they strike a balance between unfettered freedom and a carefully crafted journey.

Revisiting levels is a major part of the experience, allowing the game to be economical with its assets, but still provide ongoing secrets to be discovered. It’s just one more mechanic that becomes a mainstay, once put in place in this introductory outing. And many essential moments are on show here, too: I defy anyone to resist raising a smile when first surfing on a Koopa shell or watching Mario’s reaction to burning his backside in lava!

As liberating and thrilling as the overall experience is, there are still issues here beyond the rudimentary graphics. As mentioned earlier, navigation can be problematic given the limited detail and awkward camera. Thankfully, both these aspects will be improved later in the series.

Combined with some tricky controls, some levels can be downright frustrating — for me, this was most evident in the early Sunken Ship level which possibly sets a new low bar of frustration for swimming in a Super Mario game. In fact, ‘minor annoyances’ is probably the best way of summarising the few flaws on show here: whether it’s the slipperiness of Mario’s feet or the poorly explained mechanics of the wing-cap power-up.

Still, Super Mario 64 is a joyous experience for newcomers and old-timers alike. It may look and feel dated on occasion, but it’s a vital piece of gaming history and reminds us that this series really is masterful, even at its most primitive.

As Mario and friends begin their aerial descent in the intro to Super Mario Sunshine, it slowly dawns that we’re in for something slightly different. Sure, the action is still set in three glorious dimensions, and many of the gameplay mechanics established by Super Mario 64 remain, but the second title in this compilation has quite a few tricks up its sleeve.

For a start, the initial cut-scene is beautifully arranged and offers a hint of the much-improved graphics and animation to come. Despite its setting as something of a sun-deprived dystopia, Delfino Island is far brighter, more colourful, and generally more welcoming than Super Mario 64’s gloomier setting. Some might miss the Mushroom Kingdom, but in all honesty, after so much time there it’s nice to have a change of scene. I guess Mario, Peach, and the Toads thought so too.

Soon after landing, we’re introduced to one of the more bizarre additions in Mario’s history: an anthropomorphic backpack by the name of F.L.U.D.D. This device is a mostly permanent power-up which provides transportation alongside its main purpose of washing things clean. Yes, Mario’s swapped his plumbing job for a cleaner’s this time around, but it’s a device that helps set up an environmental message that makes for a very nice addition alongside the typical ‘rescuing Peach’ storyline.

As a result, Sunshine’s hub world, Delfino Plaza, is vertically rich, offering all manner of exploration potential once more. It looks lovely, too, and the HD upgrade certainly does the game a lot of favours. It’s no exaggeration to say that this version looks perfectly at home on the Switch, in a way that Mario 64 sadly never quite realises.

F.L.U.D.D. may introduce some control challenges of its own, but it’s generally a much-needed help when it comes to making a smooth landing. The path-making ability when cleaning up slippery goop, and its use as a weapon mean this versatile tool is central to an awful lot of the action. So much so that it’s almost disconcerting when you’re required to tackle one of the self-contained levels which prevent its use.

Musically, Sunshine is a delight, probably my favourite of the three soundtracks here. There’s a light-hearted, holiday feel, and amusing remixes of the original Super Mario Bros. theme and underground music. There’s even something endearing about F.L.U.D.D.’s monotonal voice.

I genuinely think there’s little room for improvement, provided you buy into the central F.L.U.D.D. mechanic. Aiming the nozzle can take some getting used to; I wonder if this remaster could have done more with the gyroscope, as the version of Galaxy presented here was forced to. Sometimes the innovation goes a step too far, as it does in the Mecha-Bowser fight which is a visual thrill but, frankly, a bit of a frustrating mess. These are minor quibbles, though.

Sunshine sits perfectly alongside the other two games, sharing plenty of successful elements whilst offering a very distinctive experience all of its own.

If the step up in production values from Super Mario 64 to Super Mario Sunshine wasn’t sufficient, Super Mario Galaxy picked up the baton and sent it into the exosphere. As the final outing of this trilogy begins, we’re treated to cutscenes, a beautifully vibrant version of the Mushroom Kingdom, and Toads in peril.

Perhaps more so than either of the previous 3D adventures, Super Mario Galaxy is a product of its platform, in terms of its control scheme at least. Galaxy made plenty of use of the Wii’s motion controls for gathering star bits and traversing the world map, which now has to be referred to as the universe map, I guess?

Galaxy’s camera is often more restricted than it was in Sunshine, but due to the level design, this is rarely a problem. Circumnavigating the tiny planets allows Mario’s point of view to be controlled quite easily, and there’s far less need to worry about what’s behind the main character with this perspective. I will admit, I’d forgotten quite how disorientating it can be at times, and I frequently found myself instinctively leaning my head, trying to follow the horizon.

It all feels slightly nicer with Joy-Con than with the Pro Controller, but either way, the built-in gyroscope does an admirable job of replicating the Wii Remote’s motion control. The cursor can be centred at any time using the R button, which is a necessary evil, but apart from that, everything’s straightforward. In particular, this game was designed with ease-of-use in mind, which makes wall jumping far easier than in Mario 64, and even swimming verges on an enjoyable experience! Shaking the controller to spin feels like a natural ‘emergency’ action, even if it might initially seem like hard work.

While the hub world is beautiful to look at, and the Lumas that inhabit it are adorable, it can feel a bit sterile, and there’s less to do here than in Mario 64 or Sunshine. It gives this outing less of a sense of freedom than its two predecessors, somewhat ironically given the vast setting.

In fact, the same could also be said of the individual galaxies, whose planets are typically visited in a linear fashion. Each provides a unique challenge before the next can be reached. But those individual levels are brilliantly designed, and the range of activities — chasing star bunnies, crawling around giant bees, ray-surfing — is so great that you’ll never get bored. Anyone can pick up a Joy-Con and find something to their liking here, in a way that maybe transcends the other titles.

This really was a Mario for the Wii’s target audience — i.e. everyone! — and that sense of wonder and enjoyment translates perfectly to the Switch. It may lack the somewhat bizarre innovation of Sunshine or the free-roaming exploration pioneered by Mario 64, but for sheer playability, Super Mario Galaxy is a triumph.

Super Mario 64, some 23 years old, may feel a little dated given the absolute minimum of polishes. No matter, it is still an excellent game with plenty to offer those seeking a nostalgia kick, and new players with an interest in gaming history. Super Mario Sunshine and Super Mario Galaxy both feel a lot closer to the experience that about one-third of Switch owners are familiar with in Super Mario Odyssey, although that game still demonstrates how the formula can be refined with tighter controls and, of course, improved graphics.

But great as they are, these games are presented in a minimal package. The soundtracks are a nice inclusion, it’s just a shame we’re given nothing beyond that. Couldn’t we have been treated to an accompanying ‘making of’ video or, at the very least, some pretty artwork? Why weren’t these games — especially Super Mario 64 — given a more radical facelift, similar to that granted to the contents of the original All-Stars offering?

I also feel the need to address the limited release nature of this collection. Frankly, it leaves a bit of a sour taste. Digital games should be for life, not just for a few months either side of Christmas. A limited physical release is one thing; I cannot pretend I’m happy with the precedent set when a game’s lifetime is artificially restricted quite so much.

So, sorry Nintendo, but I’m knocking off a quarter-point for each of those minor transgressions. You still got most of the stars, though.

In gameplay terms alone, Super Mario 3D All-Stars is a predictable triumph, one which will delight new players and experienced fans alike. The only minor drawbacks are the package’s lack of extras or updates and its limited release.