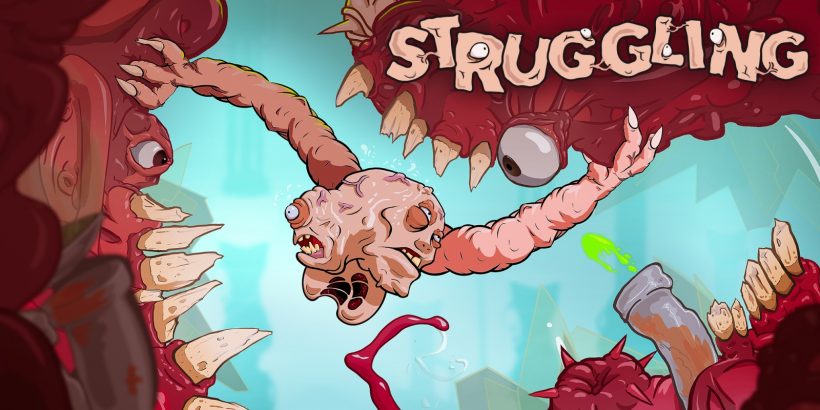 Although aesthetically unlike anything I’ve really seen before, Struggling isn’t a new concept if you’re familiar with games such as Surgeon Simulator or Octodad: games where the controls themselves are the primary challenge in a physics-based environment. Struggling takes that concept and turns it into a challenging platformer worthy of its namesake, sharing similarities with Heave Ho (if it was put through a Lovecraftian filter). As Frontier Developments’ first foray into a more diverse and indie-focused portfolio, Struggling is one of two games to launch under their new Frontier Foundry publishing label. Developed by Canadian-based studio, Chasing Rats Games, Struggling is a brave departure from the norm of the Frontier catalogue.

You play as Troy: a two-headed abomination of science. He’s trapped within a laboratory with a desire to break free. During a party gone wrong, he gets that chance. With the aid of his sentient arms – Achilles and Hector – you navigate Troy through the 2D environment, avoiding hazards, as he makes his escape. That’s the idea. As the name so aptly suggests, Struggling is not an easy game.

Capable of moving independently, getting Troy’s arms to do what you intend is no small task. With co-op allowing each person control of one arm, this title is only slightly less infuriating when played solo. Once you begin to fathom what is required to get Troy moving across flat surfaces, the game promptly removes them, as you’re asked to cross perilous expanses and climb unstable obstacles (sometimes within a time limit). Although scattered throughout, puzzle-solving isn’t needlessly complex and doesn’t detract from the core drive of the game, which is to struggle.

Ensuring that physics-based games of this nature are both fun and challenging is a constant balancing act, and it’s not a challenge that Struggling succeeds at, unfortunately. The character design of Troy can mean that, when played in handheld mode, it is hard to tell which way up he is, confusing the arm controls further than the game already intends. At times, the controls can feel backward, with the wrong joy-con controlling the wrong limb. Even with the ability to change the colours of Troy’s arms within the settings, to better differentiate between the two, movement can still be a frustrating chore.

Troy also gets frequently trapped in geometry within the environment, with arms wedged in unrecoverable positions. The developers have included an ability which allows Troy to shed his appendages, only to regrow them, yet this is next to useless as it rarely releases him from his purgatory.

Troy can also detonate, resetting himself at the last checkpoint you passed. As annoying as this can be, undertaken due to becoming trapped once more, having him shout in anguish like Sloth from The Goonies was a nice touch. The sound design of Struggling does have to be commended. From the meaty and wet foley work surrounding Troy’s movement to the game’s enjoyable soundtrack, a lot of work has gone into ensuring that the game world is as striking as possible. Something which could have augmented the presentation of the whole game would have been a witty voice-over; something with the gravitas to provide satirical commentary on Troy’s foibles.

This game has the makings of a solid concept, with genuine humour and an unexpected narrative underpinning. That being said, its core gameplay loop frustrates the player beyond the intended level of challenge, resulting in an experience which you don’t look forward to coming back to.

Struggling is a valiant attempt at a difficult physics-based game that suffers from poor execution, despite some visual polish. That’s not to say that it isn’t difficult, because it is. It’s just not that fun.