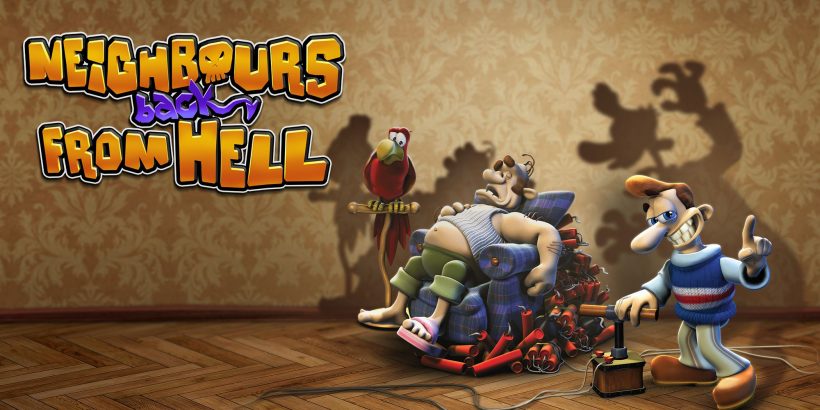 How far would you go to teach your good-for-nothing neighbour a lesson?

Probably not as far as Woody, the protagonist-cum-antagonist of Neighbours back From Hell would in order to ruin the day of Mr. Rottweiler. Such is Woody’s obsession with exacting petty justice, he repeatedly breaks into Rottweiler’s house in order to lay down a string of booby traps, sending Rottweiler towards the brink of insanity. It seems over the top, and especially so given Rottweiler is undoubtedly the furthest thing from a fine figure of a man, and neighbourhood hunk Woody looks like how Postman Pat might were he in the universe of Wallace & Gromit.

It’s surprising how well the pseudo-claymation visuals have aged. This is a remaster collection of two games which date back around fifteen years ago, but it could quite easily be something unique put out by an indie developer today. The first of the two games has Woody go to Rottweiler’s house, while the second has him antagonising his poor adversary as he holidays all over the world. Rottweiler’s miserly mother becomes a secondary challenge in the latter stages.

The gameplay is consistent regardless of the setting. As Woody, you must go about the levels laying down traps, which could be using a rotten egg to slather all over Rottweiler’s microwave, laying down marbles on his floor Home Alone-style, or even having him attacked by a raging bull. A raging bull is exactly what Rottweiler becomes whenever he falls victims to traps, as you’ll see the same animation for almost every single one.

Ultimately, it doesn’t really matter what order you choose to set up the traps, but you need to keep an eye on Rottweiler’s location, as being caught in the same room or area as him will result in losing one of each level’s three lives. Fortunately, moving from room to room is pretty intuitive – you can double back on yourself mid-transition before the game recognises that you’ve moved – but with Rottweiler following a repeating pattern, it only takes a few minutes of watching him to figure out what he’s going to do.

The puzzle element of this game is really well done – finding an object and figuring out where to use it elsewhere in the level always gives a strong sense of satisfaction. Tactically, you can arrange the objects in a certain order to ensure Rottweiler’s anger blows its lid – a meter showing just how incensed he gets is positioned to the left of the screen. Having him quicky move from one trap to another will keep this meter high, and result in the best-possible end-of-level score when combined with a quick level completion time.

What’s less impressive, though, are the game’s glitches, and its one weird typo. Pausing the game and opting to restart a level makes the game ask you, “Are your sure?” You’d think that would have been spotted this far down the line. It’s not like there are any other typos in the game, so it doesn’t seem to be an attempt at comedy, unless I’m missing something. Unfortunately, later in the game there were textures completely missing, with only white spaces remaining, and I also accidentally managed to walk Woody beyond the level’s invisible boundaries until he could walk over the entire screen without any implications.

Ultimately though, the game is good enough to not write it off as a result of these indiscretions, and with a run time of probably around the five-hour mark, if you’ve not played the game somewhere else, it would be a good bet.

Neighbours back From Hell simulates well the mindless torturing of other members of your community. Please, remember that it is a game based on humour and not an instruction manual, no matter how much you hate Maurice and his perfect lawn.