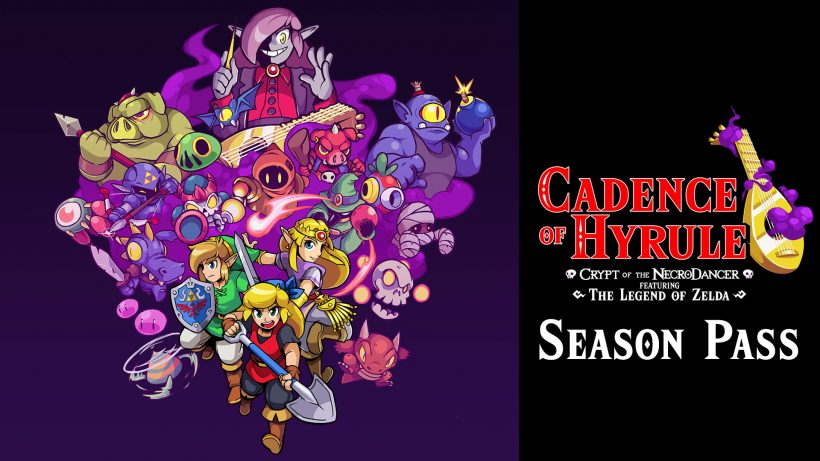 The release of Cadence of Hyrule – Crypt of the NecroDancer Featuring The Legend of Zelda was a surprise to everybody. After all, it wasn’t only an unexpected venture from an indie studio using one of the biggest Nintendo IPs, but it also resulted in a superb experience. We don’t know if it was successful enough to warrant other indie-partnerships (at least, not yet), but it was worthy of a couple of post-launch updates.

The first took form as Octavo’s campaign, a remixed version of the main Cadence of Hyrule experience, where you take the role of the game’s villain. This was a free update released for everybody, but it really gave us a hint of what to expect from the three additional paid DLC that would come with the game’s Season Pass. There are three packs that make up the pass: the Character Pack, the Melody Pack, and the Symphony of the Mask, all expanding the gameplay options of Cadence of Hyrule with some remixed content and a couple of encores.

There are some issues with the Season Pass, which I need to straighten out from the get-go. Firstly, the novelty factor is really inconsistent when you look at the three packs across the whole package. That’s not to say that any of the packages are bad. On the contrary; they are built with care, and they do add some interesting twists to the Cadence of Hyrule formula. However, aside from the Symphony of the Mask, they simply aren’t unique enough.

The Character Pack, for instance, expands the games’ roster with five new playable characters: Aria and Frederick from Crypt of the NecroDancer, plus Impa, Shadow Link, and Shadow Zelda from The Legend of Zelda. Each character comes with their own skillset, with the Crypt of the NecroDancer’s characters even bending some of the game’s rules. However, if you have played the main Cadence of Hyrule campaign before (probably more than once), then this is simply a case of playing the game with different characters.

The Melody Pack helps to add some variety to that replayable campaign, as it features a whopping 39 new remixed songs to enjoy. You can access this new repertoire via the options menu, where you can manually to select new songs for each area. While it is great to have the option to customise your own soundtrack, I also think it would be cool if these new songs were automatically incorporated into the campaign. As it is, you need to actively search for and select your preferred ones.

Then, there’s Symphony of the Mask – definitely the most interesting and significant DLC of Cadence of Hyrule. Symphony of the Mask comes with an entirely new campaign, which features a new playable character, different mechanics, and a whole new map. Here, you play as Skull Kid in a kind of post-apocalyptic version of Hyrule. After stumbling upon mysterious masks, Skull Kid needs to use their unique powers to explore this decadent Hyrule in order to discover his purpose and role in what’s unfolding. In addition to being able to change masks during combat (which changes Skull Kid’s entire moveset), there are a few more surprises up the sleeve of the Symphony of the Mask, as well as two new hand-crafted dungeons, each specialising in either combat or puzzle challenges.

If you look at the Cadence of Hyrule Season Pass as a whole, it surely adds plenty of options for remixing the base game, if that’s what you’re looking for. However, if not, you might want to consider what each pack adds, and potentially opt-in for just its best pack.

Cadence of Hyrule – Crypt of the NecroDancer Featuring The Legend of Zelda Season Pass £13.49

If you’ve played everything that Cadence of Hyrule has to offer and want more of that same experience, the Season Pass is a great option for mixing things up. Otherwise, only one of these packs needs to be on your list.