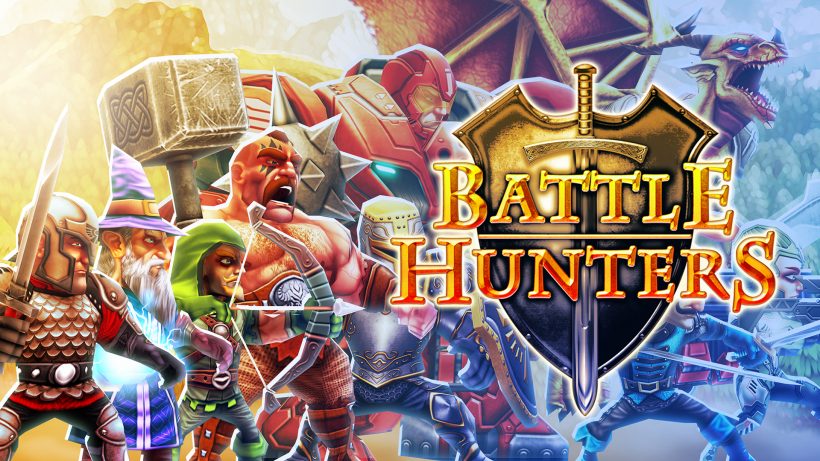 Don’t make the same mistake I did with Battle Hunters and go into it expecting a game just as generic and uninspired as its title. This colourful RPG adventure can actually be a lot of fun in short bursts, conjuring up memories of certain old-school Final Fantasy games, using traditional high fantasy tropes to let players combat foes as a whopping 28 warriors. Such a lavish character roster does come at the cost of some mechanical freedom and variety, sure, yet when you’re pounding down on a giant scorpion as a Priest, Necromancer, or giant Robot, you’re really not going to be concerned with that a whole lot.

If there’s anything letting Battle Hunters down, it’s that it began life as a mobile game. And this is most evidently seen in the environments you’re battling through, which can look very bland and repetitive (especially in dungeons) with textures and backgrounds that never take full advantage of the Nintendo Switch’s true graphical capabilities. The Witcher 3 this is not.  Even still, this ye olde world full of monsters and magic does look clean, and any lack of detail is more than made up for by a wide range of quirky character designs.

Your journey begins with a familiar trio of classes: a knight, a wizard, and an archer. Before long, however, exploring the many hub regions will see you bump into less conventional characters that are more than happy to join your party. I quickly grew to love Juan Ramirez, the duel-wielding Mexican swordsman, but I could have just as easily fallen head over heels for Raven Shadowhand, the mysterious assassin. Cheesy names aside, all feature three distinct special abilities that make them handy during enemy bouts, growing in strength the more you level up and use them as you apply skill points into various stats.

The catch is that you can only take three warriors into battle with you at any one time, forcing you to select your preferred team for the various enemy types you’re about to face. A clever mechanic, though, is in how those that are swapped out are able to lick their wounds and recover. Not only does this give you the opportunity to rely less on healing items, but it also leads you to constantly shake up your selection of heroes.

The combat in Battle Hunters almost entirely takes place in real-time, yet there are some elements of strategy in how you must select a particular target from the enemy group for your party members to focus on. All three warriors will then attack their designated enemy until instructed otherwise, leaving you to heal them or have them deploy special abilities as necessary to help keep them alive. Unfortunately, this ‘hands-off’ approach to battles does mean that allies are almost always guaranteed to get battered through no fault of your own, but at least all three gain 50 HP back upon a victory.

It’ll take you a fair while to discover all 28 characters and explore all 5 regions, but just bear in mind that aside from the unique abilities of each warrior, the gameplay never changes all that much. You’re always travelling through a hub world and completing random tasks for NPCs, which often involves venturing into a dungeon in search of a key item needed to progress. That’s why the game is best played in short bursts.

Battle Hunters should be considered the comfort food of fantasy RPGs. Its mobile game origins do unfortunately hold back the level of mechanical depth it can achieve and limit its graphical potential, but it’s an enjoyable way to while away the hours in small chunks.

Battle Hunters takes the classic real-time strategy formula of classic RPGs, blending it with a generous roster of quirky heroes. Finding and levelling them all up takes time, but is the perfect basis for multiple sessions of short burst play.