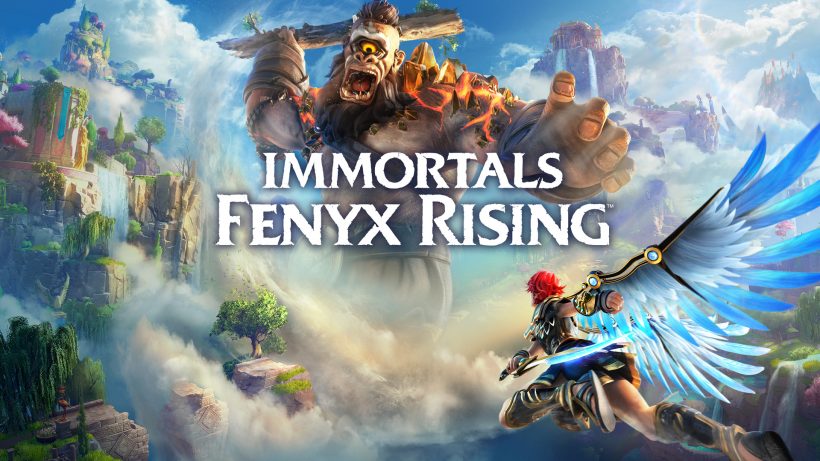 I’m the first to admit when I’m wrong, so let me start by saying this right now: I was wrong — so, so wrong — about Immortals: Fenyx Rising. I went into this new Ubisoft release expecting a mismatched, average experience veering somewhere between BOTW and God of War. And though there is definitely a huge amount of influence from these titles, particularly the former, calling it a clone would be an absolute disservice to the personality, creativity, depth of play, and quality that has been poured into what’s turned out to be my surprise hit of the year.

As in all great tales of Greek myth, at the centre lies a hero. After tragedy strikes and the Gods are defeated by Typhon — the legendary defier of Zeus — the mortal population is turned to stone, with the Gods either in hiding or separated from their powerful essence, weakened and compliant. Zeus, facing defeat, turns to Prometheus for guidance. Prometheus tells him of Fenyx: a young, inexperienced shield-bearer with a prophetic future. And so we begin our role in this tale, to take upon ourselves the power of the Immortals, bring Typhon into submission, and restore peace to this mythological world of Gods and monsters.

You could argue that Greek mythology has been overplayed at this point, but it’s clear that this isn’t just another venture into the visceral and brutal. Ubisoft has created an adventure suitable for all ages; a positively Pixar-esque family romp filled with a love for the stories it tells. Our entire journey is narrated by an exchange of words between Zeus and Prometheus who, despite their rather prickly relationship (Zeus had Prometheus chained to a rock to have his liver repeatedly eaten by a bird, after all), are able to keep up a momentum of playful banter that’s genuinely hilarious and occasionally heartwarming.

Immortals is an open-world 3rd person adventure game, but let’s address the elephant in the room. It suffers, in the eyes of many, from being too similar to beloved Switch hit Breath Of The Wild. Now I will accept that, yes, there is an incredible amount here borrowed from the capers of our favourite Hylian hero. The climbing mechanics are identical. Instead of shrines, we have myth challenges, which contain similar puzzles involving moving blocks and balls, manipulated using a mechanic so similar to the Sheikah slate that I’m expecting a Korok to pop out from under a rock at any second. I could spend far too long going through the similarities, but you know what? It really doesn’t matter. Immortals is a game with its own standard of quality, and in some areas, improvements have even been made. Mounts are tameable, for example, but in Immortals, once tamed, they’re added to a list that you can call from at any time with the press of a button, allowing you to rush off with speed in seamless transition. The game is full of unique equipment providing different stats and bonuses, but in Immortals you can apply any cosmetic effect to the one you want for its stat gains, meaning you can always look the way you want to look. There are countless little changes like this that work for the better, and I found myself sighing with satisfaction on a regular basis.

One area that Immortals has completely made its own is its combat system. Fenyx is equipped with three core weapons: a sword, an axe, and a bow. They do mostly what you think they’d do, but what makes it work so well is how tightly it all blends together. Dashing and parrying plays a big part, with frame perfect utilisation resulting in bullet-time gameplay, allowing you to connect extra hits. The axe, as well as being more destructive, builds up a stun bar that, when full, will knock your enemy out for a brief time. Your bow can be utilised for quick shots in between, and a special ability allows you to control the trajectory of an arrow manually for strategic targeting. A proper stealth mechanic is employed, allowing you to execute critical attack damage from the shadows. Rocks, much like in BOTW, can be lifted and launched, but in Immortals this feels a much more responsive system. What’s key is that battles always feel winnable, even against vastly tougher opponents – if you can master the mechanics, all supported by a terrific amount of skill tree customisation, allowing you to unlock new combat and passive abilities.

Being an open-world Ubisoft game, I was concerned that I’d find myself in a similar situation to Assassins Creed — with side quests uninspired and repetitive — arbitrarily forcing my way across the map. That’s not the case here. This beautiful world is packed full of secrets, puzzles, and rewards that feel incredibly satisfying. Every side quest is fully realised with custom cutscenes, hilarious character interactions, and brilliant voice acting. I urge you to not be put off by naysayers that haven’t even played the game. If you’ve been playing BOTW over and over again for three years now, Immortals offers a brand new adventure in a stunning new world, and you owe it to yourself to at least give it a chance.

Immortals: Fenyx Rising is a superb new IP from Ubisoft. It may borrow heavily from other titles, but don’t get hung up on it. This isn’t a cash grab. It’s a beautiful game and a quality product, crafted with love.