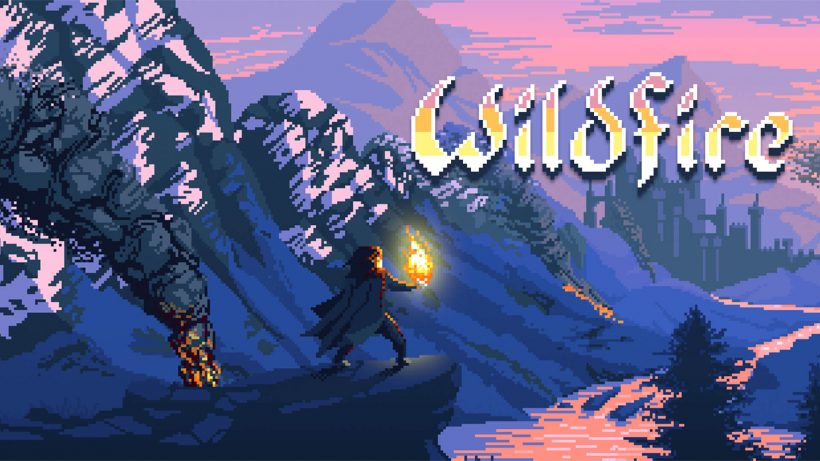 Water! And Fire! And Earth! Oh my!

Developed by Sneaky Bastards and published by Humble Games, Wildfire is an addicting and charming little pixelated stealth action game that is oh so satisfyingly fluid to play. Our story begins in a humble village, where on a V.I.P. mission for an upcoming festival, a strange meteor zooms overhead and audibly lands somewhere nearby, and you simply must investigate! This little tutorial will teach you how to navigate the terrain and traverse the platforming goodness.

When you return to your village, you’ll quickly discover that everything is, in fact, on fire, and your fellow villagers are being hauled away at swordpoint. Despite your best efforts, you too are captured, tied up, and left to burn. Only, the fire doesn’t work so well on you; in fact, the fire takes a distinct liking to you. Transformed into the witch you were originally accused of being, you must harness the power of the elements to rescue your friends.

You’ll begin with fire, but as you progress through the game you’ll also unlock other elements (water and earth) that will give you different powers. There are multiple ways to tread through each level: grow vines up walls to climb to high places, create bubbles of water that can float you around, or just light everything on fire. This game has a powerful stealth element to it as well. Each level is patrolled by several enemies. These enemies are hell-bent on finding and killing you, and they are also very good at wielding their weapons. “Running and gunning” isn’t going to get you very far in Wildfire. You must use your brain, and the terrain, to safely make it to each level’s exit.

Every stage has several objectives for players to attempt, from simple things like going unnoticed and not killing anyone, to more specific tasks like “return your ancestors remains”. Achieving these objectives will net you spirit points you can spend on the map screen to power up your character’s abilities. Each level has a speedrun goal you can turn on as well if you’re into that kind of thing, and all of this adds up to provide plenty of replay value.

Artistically, Wildfire is prime pixelated goodness that hearkens back to the SNES days of old. The music is top-notch too, and cleverly plays depending on the intensity of the situation you are in – it’ll ramp up if you’ve made guards suspicious, and gets downright intense if they are fully alerted. There are also quaint vocalized sounds for the guards. Should you be spotted, a triumphant “Haha!” will be aimed your way as a sword is swiftly submerged in your side.

Then there are the bobcats. Cute little growls are the only thing that make up for their annoyingly good sense of smell; the little jackanapes can smell you through floors and roofs!

The game has a tremendously fun couch co-op mode, but this mode only makes the game lag even harder. Almost to the point where it becomes a bit too painful to keep playing. It is difficult to do things like time a precise fall onto an enemy’s head when it feels like your character sprite is falling through a jar of honey. If the lag issue is fixed, Wildfire is a downright gem of a game, worthy of being in any gamer’s library.

Amazing fun and inexplicably addicting, Wildfire is a worthy addition to your collection, especially if you like a good stealth game. However, the game is inexplicably laggy, to the point of annoyance. Fingers crossed that a patch is forthcoming.