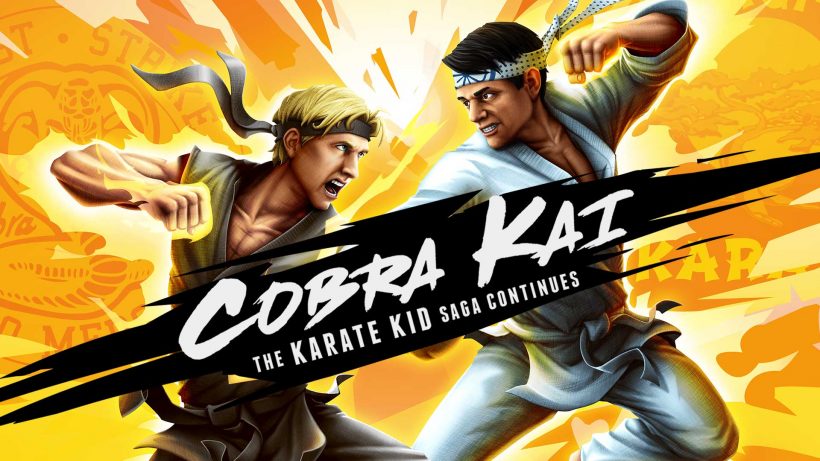 One of the best things about the Cobrai Kai TV show on Netflix (previously YouTube Red) is just how surprisingly good it is. Taking place a whopping 34 years after the end of the first Karate Kid movie, the producers and writers clearly possess a great understanding of the source material that franchise reboots rarely demonstrate, resulting in a faithful extension of the IP that never feels forced. Then, on the other hand, you have the official Cobra Kai tie-in video game, clearly made on a budget yet facing the similarly tough challenge of showing the same level of affection. Brawling as your favourite characters is fun for a little while, but repetitive gameplay and horrible stuttering on Switch ensures this snake probably should have stayed in the grass.

Admittedly, a 2.5D side-scrolling beat-em-up is perhaps the best genre choice for a universe where almost every mainline character knows karate. In this two-pronged campaign you’ll play as members from both the titular dojo headed up by Johnny, as well as Daniel LaRusso’s newly formed rival outfit, Miyagi-Do Karate. Both pathways play incredibly similarly for the most part, as you battle endless foes with a combination of punches, kicks, grabs and special moves, the main difference between them being their unique character rosters and different elemental power buffs: Cobra Kai utilises fire techniques while Miyagi-Do fighters wield ice.

Cobra Kai: The Saga Continues matches the TV show’s penchant for overt cheesiness and not so subtle metaphors, and it all comes together to create a super stylistic game that doesn’t take itself so seriously. It feels like it fits in with the Karate Kid universe. The plot sandwiches itself between the last season’s finale and the upcoming third series, meaning that anyone not caught up will instantly find themselves lost or spoiled. Luckily, though, this side story ends up feeling very throwaway, with Hawk and Demetri’s faming device exposition in the principal’s office being little more than an excuse to fight through various locations from the show.

The shopping mall, LaRusso Auto, and even the mini golf course that Miguel took Sam out for a date on during the show’s first season (weirdly) all make an appearance. Such areas might seem an odd choice to any uninitiated players not familiar with the show, but it’s just another way Cobra Kai: The Saga Continues hopes to satisfy long-time watchers. Most locations do feel like they’ve been ripped right out of a Streets of Rage or Final Fight due to how grounded they are, yet it leads to this odd line being blurred between reality and fantasy, since the fight manoeuvres you’re performing look supernatural, yet environments are not.

This indecisive attitude also bleeds into Cobra Kai’s choice of art style. Because while I’m pleased that developer Flux Game Studio elected to portray the show’s 1980s roots using hyper-stylised special moves and HUD elements, its aesthetic sits somewhere awkwardly between looking like a comic book and an early internet flash game. Familiar characters like Tory, Daniel, Robby and Miguel all look recognisable, but the models themselves, and any important objects, sport an ugly black outline that generally makes the game an eyesore.

Also a letdown is the monotonous brawling. At first it seems there are lots of combat opportunities available, with every character boasting unique special moves tied to cooldowns and other exclusive techniques reserved for either dojo. However, aside from when you’re able to deploy a screen-interrupting manoeuvre, Cobra Kai: The Saga Continues ends up being a bit too button mashy, which isn’t ideal when the hit detection on enemies is extremely unreliable. Upgrading your faction’s traits and skills within the dojo helps stave off some repetition, yet once you unlock each’s unique moves the shallowness of the gameplay comes fully into focus.

Further not helping is Cobra Kai’s poor technical performance on Nintendo Switch. Though by no means a game-breaking factor, there are certain instances where the frame rate is always guaranteed to drop severely. The biggest offenders are environmental kills, where throwing an enemy into a garbage can or car bonnet whenever they’re stood nearby briefly sees the game enter a cinematic view, only for the action to screech horribly to a halt. It doesn’t matter the stage, the character or which item you’re chucking someone into, this always happens. This combines with frequent stutters in the menu screen when switching tabs, and characters controlling stiffly to make Cobra Kai on Switch far from the definitive version.

Cobra Kai: The Saga Continues is a good adaptation of some great source material. Taken on its own merits, though, as a game it’s held back by uninspired art direction, repetitive gameplay and technical woes aplenty. Devout fans of the TV show will likely get a kick out of this interquel tale, but it’s hardly worth bearing through when there are so many better beat-em-ups out there.

Cobra Kai: The Saga Continues is a slavish love letter to the TV show it’s based on, but movie call backs and fan-favourite moments only goes so far. There are far more competent and creative brawlers on Switch.