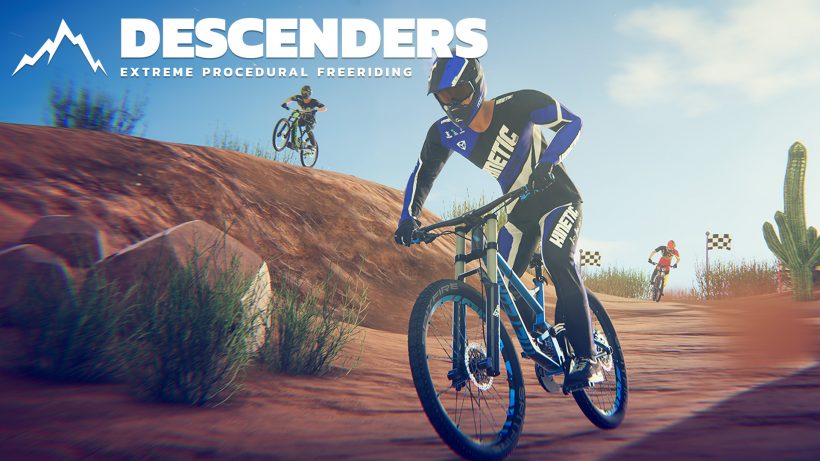 I had trouble finishing this review; not because I couldn’t think of enough to say, but because I simply couldn’t stop playing this game. Descenders is a BMX game that throws you downhill at breakneck speed and initially, it’s all you can do to avoid obstacles and keep yourself upright. But shortly I found my reflexes sharpening and my confidence growing, and a well-executed jump from a ledge in the middle of the Scottish highlands was my chance to pull off a 360 backflip before hurriedly balancing myself to avoid eating dirt upon landing. And it felt GOOD.

So, the main event is the Career Mode in Descenders, which guides you through a series of randomly generated maps with each having several nodes with various events and tasks, all leading towards a boss level. There’s great visual variety in the worlds, starting with the beautiful and luscious Scottish scenery, but soon there are forests, jungles, and deserts to explore as well, and each with different obstacles and terrains to master. Completing the Highlands will unlock Forest, but once you’ve achieved this three times you can start straight from Forest, and the same with the subsequent unlockable worlds as well. Each time you fall will cost a life, only earned back through completing level tasks, and you’ll need plenty of spare lives in the more difficult levels and especially in the huge, gruelling boss jumps needed to advance to the next world.

Now, while it may seem easy to just jump into the later worlds to complete the career, you’ll be at a disadvantage. As you progress you’ll unlock Crew Members with different perks to assist you, ranging between improving flip speed, adding stunt ramps, or reducing bike wobble at high speed. Just like Hades, the feeling of getting just the right combination of perks can lead to a run that feels like THE run, perfectly fitting your style, making it all the more brutally thrilling when you make it through a world with a single life left.

As it’s procedurally generated, there isn’t a level to memorise; the emphasis is instead placed on getting better, and it’s been a while since I’ve felt such a satisfying learning curve and feeling of ‘just one more go’ as I attempt to master the many moves and style of levels. While initially you have to pay attention to how you handle your bike just to stay upright, you’ll soon master the tricks which land you rep points and help you to unlock accessories to glamorise your character. Furthermore, you can earn sponsorships to unlock even more tasks for some exclusive, themed gear. Altogether it’s a challenging yet satisfying gameplay loop, along with constant rewards that make Descenders almost impossible to put down at times.

Elsewhere is Daily Challenge, where you get one chance to get your name on the global leaderboard. There’s also Multiplayer where you can jump into levels to compete against your friends, a Freeride mode where you generate the sort of level you want to explore, and a Bike Park where you can test your skills with impunity in a few levels, including a brightly coloured ‘Bikeout’ level suitably stuffed full of swinging obstacles and crash pads.

Helping you along your journey is a fantastic selection of music tracks with some energetic electronic beats designed to keep the blood flowing, with the music carrying over between courses to keep the energy levels high. You can also relive your best runs with Replays as well. Sensibly, you can save replays and access a fantastic photo mode after each run, so your fun doesn’t need to be interrupted mid-game. It’s a surprisingly robust mode that had me losing even more time as I tried to capture the perfect shot of some of my proudest tricks.

Sounds great so far, but there is a catch. This is a game meant for more powerful consoles, and the developers have done a fantastic job of porting the entire experience over to Switch but the visual quality does take a hit. The sacrifice made for a stable frame rate is clear, but given how well the game controls and feels, it is understandable and it looks good enough in motion that you’ll barely have time to pick apart the details. The game really sings in handheld mode, and it works well with the fantastic pick-up and play nature of the game. There are occasionally still some frame skips; they’re noticeable but never got in the way of gameplay but prepare to also spend perhaps a little too long looking at loading screens between nodes as well.

Altogether Descenders manages to pull off something that few games can; that true ‘pit of your stomach’ feeling of scale and exhilarating danger that’s so utterly rewarding when you nail the landing. Meanwhile, with a tough main campaign, plenty of different options, and a seemingly endless amount of customisation items for your character, Descenders is a game that could keep you busy for hours. While the Switch port is a little rough around the edges, playing in handheld is absolutely worth it. I’ve put over a dozen hours into Descenders and I feel like I’ve barely scratched the surface, so if you’ll excuse me… the Highlands are calling.

Descenders offers almost endless fun thanks to fantastic arcade action and infinite procedurally generated levels to play with. Though the move to Switch does come with some graphical concessions, this is a fantastic way to play this sort of game.