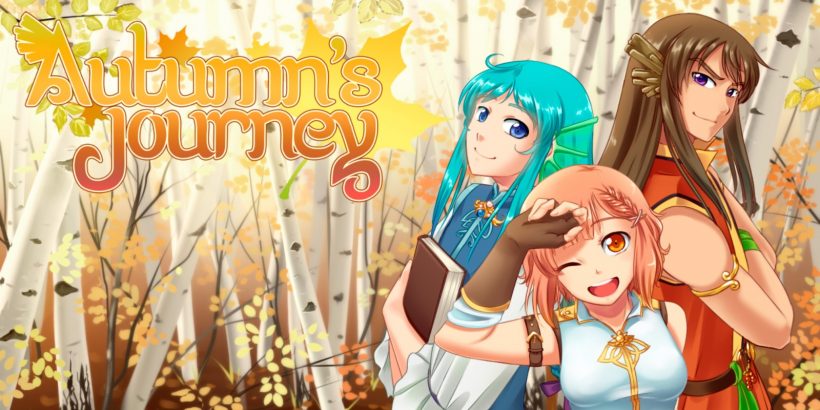 The anime art style within video games is as familiar as game types such as team deathmatch or capture the flag. From JRPGs to dating sims, this visual choice can harbour a multitude of different genres and experiences (on various ends of the quality spectrum). Autumn’s Journey stops short of providing you with any kind of definitive experience at all, producing something which is more of a picture book than a video game.

You play as Auralee, a young woman who aspires to be a knight like her mother. She protects her small town of Berri from bandits, raiders, and monsters alike, but must journey further from home than ever before when Kerr, a brash and angsty dragonkind trapped in a human body, is thrust in her path. Together, with the help of the meek Ilmari (Kerr’s supposed observer), they must find the means to break the curse and return them both to their own realm.

The game itself plays out over a relatively short two-to-three hours, but simply calling it a game is doing this title a disservice. There’s surprisingly no gameplay to speak of. You click through static images with accompanying text, as the conversation and story progress without any real interaction needed from the player. Auralee rarely ever requires you to make a choice about what response she should have, with the game only giving you this interactive option seven times across the whole game.

This supposed visual novel is extremely light on interactions of any kind, and in these cases, the story should be both engaging and unique to hook the player and justify their time. Autumn’s Journey sadly accomplishes neither. The first-person narrative often feels stilted and a little cheap. Conversations don’t flow like they’re coming from real people, and moments of humour are regularly over-explained, insulting the player’s ability to connect the dots. The lack of player agency was the biggest blow this title could provide, even by visual novel standards. You never feel like you’re a part of the story, only really ever watching it play out from a distance.

To say the game is part-voice acted is over-generous. Autumn’s Journey contains a handful of repeated barks which are recycled throughout the brief runtime. These range from very short grunts to three-to-five-word sentences. Backgrounds are also repeated, with very few characters deemed important enough to even get an illustration and most remaining as just a name and text box. On more than one occasion, the name of characters didn’t even fit the confines of the box the developers provided it, going for a one size fits all approach which betrayed the quality of the overall title. Even the singular real antagonist is left faceless.

In terms of controls, the game can be played entirely passively by setting it into ‘auto’ mode. The text cycles itself, clicking through the conversation and giving you ample time to read the sentences being presented to you. This completely hands-off approach removes the player from the equation entirely, but may prevent repetitive strain injury hammering the A button. With the ability to go back to the last panel at any time with the L button, this may be the best way to play should you miss something.

All in all, Autumn’s Journey may provide very limited enjoyment if you’re either short on time, or just need a stress-free outlet to unwind after a hard week. Its OpenDyslexic accessibility is to be commended, but finding much else to praise within this short and hollow adventure is a difficult task.

Autumn’s Journey is a mercifully short jaunt into a fictional anime-inspired world. With a narrative on the grim end of the quality spectrum, and no gameplay to really speak of, this title should be one to avoid for most.