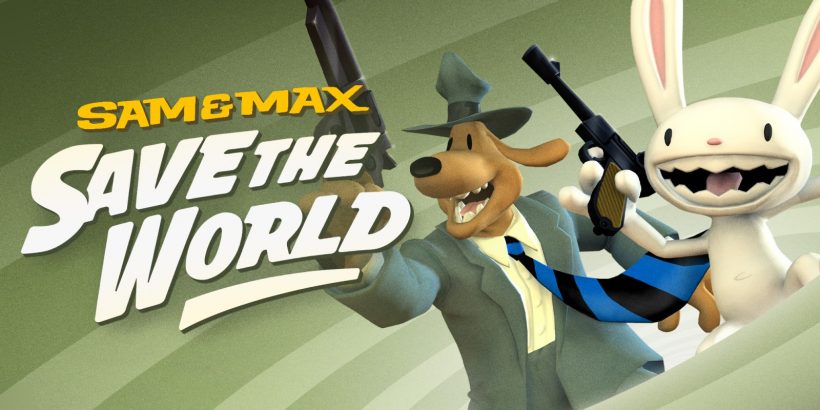 Canines and rabbits can save the world! Who knew, although after the year we have all had, anything is possible, and Sam and Max are ready to take you on an episodic journey to solve crime. If you’re a fan of Telltale series such as The Walking Dead or Batman, this could be for you.

Sam and Max Save the World is a remastered version of a game last seen on Wii in 2008, and here Skunkape Games have given it a lick of HD polish and a new home on Switch. Original creator Steve Purcell gave his blessing to the game’s production, and a number of the original development team jumped on board.

You take control of Sam – a tall canine detective – as you look to solve mysteries set across six episodes. Your sidekick is Max, who looks like a Rabbid and acts like one as well. Whilst Sam is your mild-mannered hero, Max is always an energetic little chap who wants to jump in head first, to hell with the consequences. Thankfully, Sam keeps him in check with a word or two, and if that fails, a kick up the behind. Each of the game’s other characters all have their own traits, such as Sybil and her love for analysing the mind of others, or Bosco at the Inconvenience Store, who would gladly sell you the hole out of his last polo mint if he thought he could get away with it.

The game’s controls have been altered for Switch, but they do feel laggy and cumbersome at times. To focus on key items when solving a case, like a filing cabinet in the office, for example, you flick the right stick, but this sometimes heads off in all sorts of directions and can become irritating after a while. You can use the Switch’s touchscreen functionality to investigate items but this doesn’t feel as intuitive as I would have liked.

The game follows a logical trail when it comes to speaking to characters and using items that you find to solve the mysteries. There is a strange flaw whereby you might find and try to use an item, but nothing seems to happen when it should. One example of this is in the first episode ‘Culture Shock’, where you need to drop a bowling ball onto someone from your open office window. It took more than three attempts to complete this, and there seemed to be no reason as to why this was happening. On the fourth attempt, it worked and on I went. It was a strange quirk and one I am still baffled by, but whilst it was frustrating at times it didn’t spoil my fun of the game too much. Nothing a post-release patch couldn’t rectify.

What I liked about the objects found is that there are enough to keep you intrigued without being so many that you end up getting bored and over faced. Each item has some entertainment value as well, such as your gun, which you can shoot to flip one-way signs around with and turn the world upside down, or a boxing glove used to give someone a warning they are not paying attention to your crime cracking duo.

The fact that each chapter is self-contained means that every one feels fresh from the last and keeps the player wanting more. Your first episode involves investigating ex-child star actors and the man who has been taking over their minds, Brady Culture. Episode three was my personal favourite, where our duo head into Mafia Land to try and find their mole who has all of a sudden gone quiet. Has he made one too many molehills, or has he been making a mountain out of it all? This one has a very 1950’s US crime drama feel to it, and Sam and Max will have you laughing along as you try to bring down the mobsters. While the humour can be juvenile at times, it is also very funny. “Do the carpets match the drapes” was a personal favourite line.

The following episode is somewhat topical, as a President of the United States of America, in this case Abraham Lincoln, has apparently been hypnotised and is acting very strange. There is no proof that the current President has been hypnotised, but perhaps it would explain a lot?

Graphics in Sam and Max Save the World are much crisper than they were back on the Wii, but things do get a tad hard on the eyes when playing in handheld mode. I kept thinking I needed to adjust my glasses when I was looking at things in the distance, as it can get become difficult trying to make out all of the objects and points-of-interest on screen. The music has been seriously updated and the lively jazz tunes are cool, with five totally new tracks to boogie along to as you go. The speech is also much cleaner, and Skunkape Games have done an impressive job of ensuring that the lip sync is all spot on – in the Wii version it was all a long way out.

Overall, this is decent remaster of a classic point-and-click title, and if that style of game is your thing, this is well worth a look. There are some niggles, such as the occasional input lag and confusing need to try and complete a task more than once, but it’s a neat and entertaining little package. Once you have finished all six episodes though, there is little to bring you back for another playthrough, other than perhaps to be cheered up by the daft humour.

Sam and Max Save The World brings the crime-solving duo back for a modern audience and its new lick of paint is very welcome. Annoying flaws are a shame, but it will have you laughing as you go.