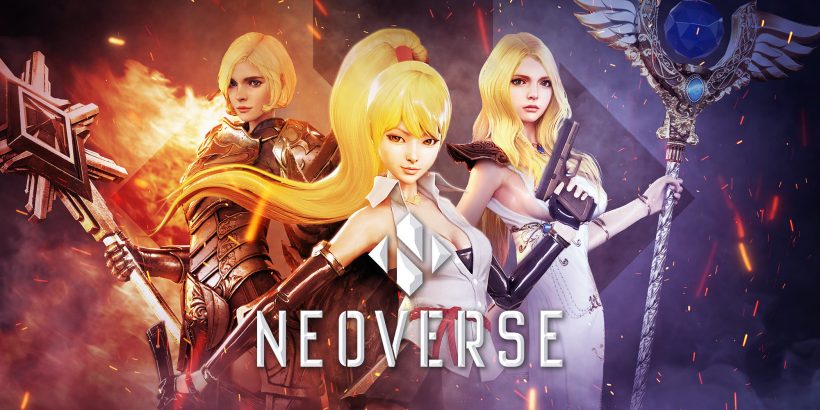 Both strategy and a love of deck-building games are the order of the day with Neoverse Trinity Edition. I would usually provide a bit of a back story at this point, but there isn’t one to tell you about. Some scantily clad ladies form your heroes in a title where you may as well make up your own narrative, as it feels as though the developers decided it wasn’t important here.

You take control of one of the three main heroes – Naya, Claire or Helena – starting with a basic deck of cards and needing to improve/build on it in order to defeat an array of enemies. Strategy is key as you consider whether you will play the defensive long game, or go on the front foot with an all-out attack. You can use your attacks to chip away your enemies’ health, or use armour cards so that when you come under attack you are partially protected against certain enemies (or fully later in the game, if you play your cards right).

Beginning with a standard health and mana rating of five, you’ll learn quickly that it’s game over if either of these stats drop to zero, and you’ll be able to increase the numbers by both winning battles and using gold earned in fights at the shop. The battle system itself is called Battle Tech, and provides a guide on how to trigger certain techniques such as parrying blows, instigating combos, or more precise attacks. Each battle allows you the opportunity to select the normal setting or ‘elite battle’ – a harder challenge to conquer but one that also reaps a potentially greater reward.

Choosing which battle to go with each time as you progress needs a lot of thought and consideration. To reach the endgame, you’ll need to dispatch fifteen sets of enemies, facing boss battles every so often, too. There are three game modes: You’ll start with the Adventure mode, which is basically your easy setting, move onto the Hunter mode once completed (which is pretty much the same), and then finally from there the difficult Challenge mode.

Characters themselves in Neoverse feel somewhat undercooked in their different attributes, but they do at least add interest to the proceedings. Naya is a tough lady who opts for guns and plenty of blades to inflict damage on her foes, whereas Claire prefers blood-sucking techniques to defeat those that stand in her way. Claire also has healing properties, which would be great if it wasn’t for the fact that they’re quite unbalanced – completing the game with her should take no more than an hour.

Helena, in particular, is a proper badass. As a summoner, she can get additional help from a red dragon who deals fire damage, a white lion that basically does the sum of nought, and a Griffin who can provide you with armour. Helena is the way to go when trying to drag the most enjoyment out of the game, as she at least has some personality built into her character.

Crucially in Neoverse Trinity Edition, you need to ensure that the deck of cards you build has a nice balance to it. If you go for attacking cards all of the time, for example, you will find yourself defenceless and likely destroyed before you can even pull out an ace. There are blue, red and purple-typed cards at your disposal, red being attack based cards, purple the magical elements (such as breathing powerful winds to cause damage), and finally blue cards which form your armour and protection. If you learn relevant sequences then you can achieve a combo by using the cards in a certain order, but this does feel a lot like luck rather any specific skilled judgement.

Graphically the game looks okay, if a little rough around the edges. It has an appealing anime style, but that’s as good as it gets when it comes to the visuals. The animations when you attack are static, and everything feels wooden. There is a slight bobbing of the knees from your hero whilst you choose which card to use, but the varying backdrops – whilst colourful enough – do nothing at all to impress. It’s not an offensive game to look at, but it’s not that pleasing or notable, either.

The UI in Neoverse is really difficult. The text is just about visible in TV mode, but in handheld mode it’s far too small and fiddly, and I found myself spending far too much time having to check what I was reading, to the point where I just gave up altogether by the end. Having to use a cursor is also counter-intuitive, as it moves so slowly across the screen that it becomes a hindrance.

Music is also quite bland and painful on the ears. It’s a mess of orchestrations that doesn’t fit in with the on-screen action. I ultimately decided to mute the soundtrack and play something more palatable from my own music collection instead. When you attack an enemy, the SFX is a dull thud that just left me scratching my bald bonce and thinking, “is that it?”.

Overall, Neoverse will hold some fun for deck building fans, but this a game with no story, no explanations and, ultimately, is lacking in far too many ways to warrant a recommendation.

A deck-building game that’s forgotten to include a narrative behind it, Neoverse Trinity Edition doesn’t do a good job of making your fights feel meaningful. Only the most dedicated of strategy card game fans will find any joy here.