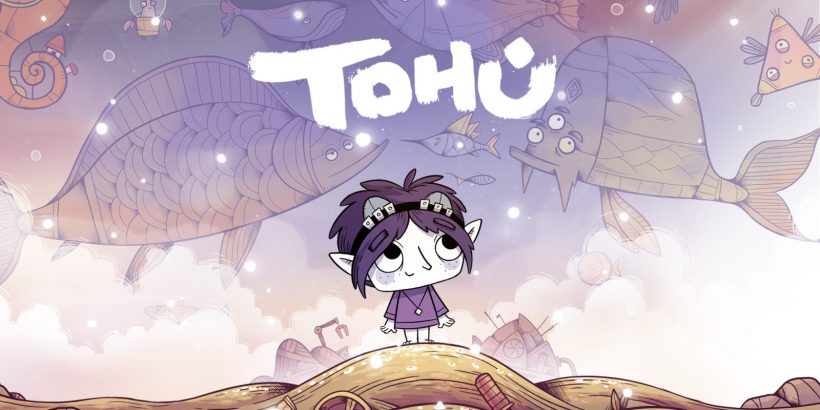 One of the toughest puzzles that point-and-click adventure games have to solve themselves is how to craft a challenge that is accessible yet meaningful. Achingly obscure logic might be funny, but it’s not necessarily fun. Too often, such games descend into trial and error. TOHU does a reasonable job, but it doesn’t really solve this problem to complete satisfaction.

There’s a sense of missed opportunity to the whole affair. For example, you start out in a world of fish planets, controlling an adorable young toddler — literally, “The Girl”, which I feel shows a lack of imagination. She does at least have an interesting other side to her in the form of a mechanical alter-ego, Cubus. The game doesn’t really follow through on the whole fish planet angle, nor is the robot you can transform into utilised to its full potential, or even explained in a satisfying way.

TOHU is a fantasy point-and-click puzzler, much in the Machinarium mould: sparse dialogue, slow and thoughtful play, with mostly linear progression. This Switch port takes point-and-click to the extreme; almost every interaction takes place using a cursor controlled with the left joystick. That even extends to the main menu which, frustratingly, must be navigated with the cursor rather than with the D-pad or buttons.

Much of the action takes place in a storybook style, with cutscenes, graphics, and narration supporting the main gameplay. To its credit, this is one area in which TOHU shines. The animation and general artwork, combined with a typically enthralling soundtrack from Christoper Larkin (of Hollow Knight fame), make for a thoroughly immersive environment. It’s just a shame more effort wasn’t taken into explaining the background of this world, fleshing out the fishy planets and The Girl’s back-story. The overall plot is serviceable, but basic.

Core gameplay involves hunting around the screen with the cursor and finding interactive objects. Some can only be dealt with by the robot version of you, while other areas require the nimble agility of little girl-you. Unfortunately, TOHU fails hardest when it comes to these object-based puzzles, simply because they are either too obscure or just require stumbling upon a specific cluster of pixels to proceed. It’s not as if there are no redeeming challenges here, it’s just that too many are either uninspired or unsatisfying. One is just a slightly less interesting riff on the old goat, cabbage, wolf riddle. Another demands you hand over one item of bling in return for another, for no other reasons than … shiny?

Thankfully, the plentiful mini-games are typically more rewarding. These have you taking on shape arranging, pipe organising, liquid balancing — all classic logic puzzles that offer a welcome respite from the standard point-and-click fare. There’s still the odd bit of trial-and-error that borders on exasperating, but TOHU manages to pack enough variety into its relatively small set of locations to make the journey an enjoyable one.

Some of the games here might actually be impossible, given the limitations of the joystick-controlled cursor, but at least the game gives you an options screen to control its sensitivity. I still felt the need to switch to handheld mode to get past the whack-a-mole game, though. But that particular game does have a nice twist.

TOHU has some solid ideas with plenty of surface appeal, but it feels a little rushed in places. It lacks the depth to move anywhere beyond fairly entertaining, but brief, escapism.

TOHU is a decent point-and-click puzzler, with attractive visuals and some fun mini-games. A lack of Switch-specific controls and an over-reliance on trial and error hold it back, but patient younger players will enjoy themselves.