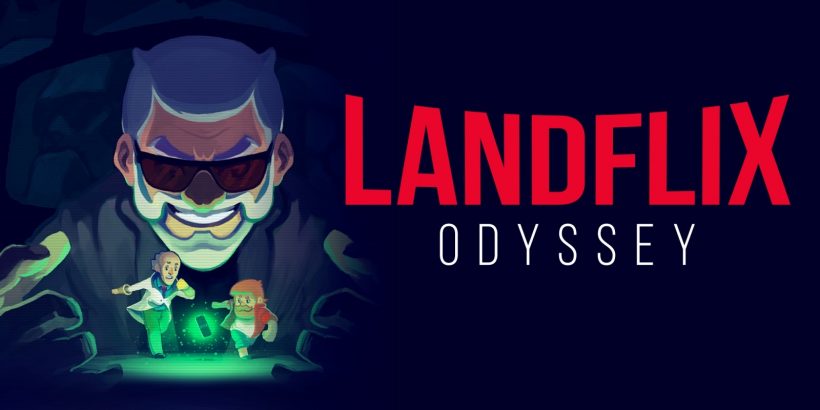 Streaming TV services have taken over the world, and in Landflix Odyssey they have taken over Larry’s life too. Larry is a lazy, beer drinking couch potato who just loves a good season of some of the best TV shows. One day he accidentally pops radioactive batteries into his remote control, and he is thrust into those TV shows. He must get through them all if he is to return the real world!

The obvious bowing of the head to Netflix continues through the TV shows; it is not hard to recognise their influence, and the game is very much a parody of the blockbuster shows that many people love. Elder Thrones (Game of Thrones), Going Mad (Breaking Bad) as well as The Standing Zombie (The Walking Dead) are all here. As Larry you need to traverse five different worlds split into levels where collecting coins will help you to unlock the next world. There are 100 coins hidden around each level and whilst you don’t have to collect them all to progress, completion fans will want every single one.

You begin equipped with just a burp – yes, a burp – which whilst juvenile is executed convincingly and does raise a chuckle. A burp disorientates enemies, allowing you the opportunity to put them out of their misery by jumping on their heads in true platforming style. It is amazing how effective a burp can be in eradicating monsters. The education of gaming, folks!

In The Elder Thrones you have a sword alongside your burp, in BlindEvil (DareDevil) there’s a cool stick that you can throw to attachment points, gaining access to higher ground through the levels. These little additions are well thought out and help to make each level feel fresh from the last, with the exception of the slow down ability in Going Mad, which doesn’t really seem to serve much of a purpose.

Visually, Landflix Odyssey is a real treat with cool pixel graphics and a strong 8-bit era vibe. The music is very much in the same vein too. Throughout the game the visuals and music reminded me of classics such as Bonanza Bros and Alex Kidd games such as Miracle World.

Once you have beaten the main seasons there are additional special features which at times feel a little superfluous, but climbing the North Wall whilst being chased by the undead is a cool break from the platforming sections and is worth a look, if not absolutely essential to the experience.

I will level with you. This game does absolutely nothing original and unashamedly takes its ideas from pretty much every 2D scrolling platformer that has ever been made but what works in its favour is the fact that it does it all very well. The platforming itself is great fun and it has a joyous pick up and play feel to it. Learning the mechanics is not going to cause you any headaches at all; it’s an accessible journey.

The humour may be puerile but somehow it just gets away with it and it ties in nicely with the parodying of the TV series’ to which it does more than just nod in the direction of. There is plenty of replay value here as well as you go back for those coins you may have missed or to take out every enemy you come across. The difficulty is pitched just right; the game never feels too easy nor too hard. One criticism I would highlight is that the game lacks pace and so it might not be for everyone.

What we have here is an absolute gem of a game. Original? No. Full of fun, immensely playable and easy to jump into? Yes. A great homage to the 2D platform games of the late 80’s and early 90’s that deserves its place on your Nintendo Switch.

Landflix Odyssey is not only a homage to five famous TV series’ but it is also a superbly fun 2D platformer that has plenty to offer and will have you burping a chuckle out time and again!