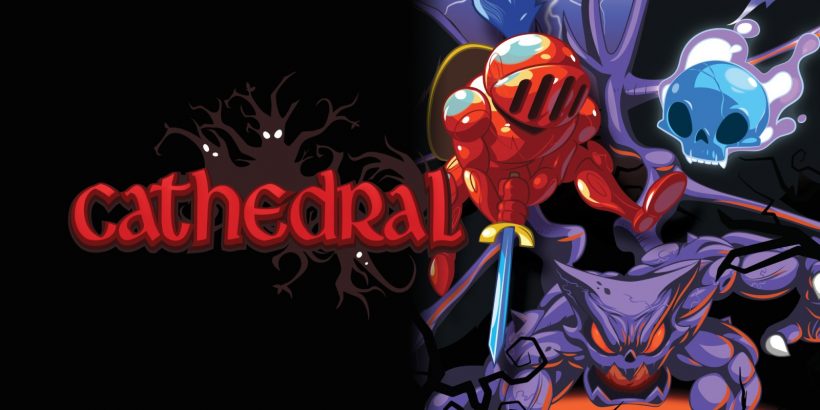 We’ve been here before. By that, I don’t just mean the 8-bit retro-inspired visuals, I’m also referring to the obvious influences that Cathedral has drawn from. Metroid and Castlevania unwittingly concocted the term Metroidvania, and there have been plenty of excellent games that have embraced the genre recently. Cathedral has little innovative input of its own to contribute, but it does however dig its pixel heels into the genre wholeheartedly.

Cathedral, then, is built on the familiar foundations of a Metroidvania adventure, inviting players to explore a large side-scrolling 2D world, with further areas of the map becoming available as your character increases their skill set. The adventure begins with little opening explanation (yes, we truly are on familiar gaming territory: our protagonist awakes with no recollection of previous events) with your knight character wandering the rooms of the cathedral of the title. Initially equipped with just a sword for direct combat and the ability to jump on enemies’ heads in a similar vein to a certain infamous plumber, our hero explores their surroundings to the accompaniment of lively chiptunes reminiscent of the late 80s.

It doesn’t take much exploration to find a closed door with an out-of-reach switch to open that door, but our gaming brains are trained to make a mental note of this temporary obstacle and head in a different direction. These levels are not as sprawling as some of the most labyrinthine Castlevania games, and there is a helpful map to record your progress. It does an admirable job of aiding the player, not only with icons to help identify landmarks, but also the handy option of dropping your own tag to note points of interest that you may want to return to.

The initial cathedral environment eventually opens to other areas, including a nearby town, Ivystone, which acts as a hub suitable for any brave adventurer. Several characters inhabit the town. Vale the health mage will replenish your lost energy hearts, while a knight in green armour calling himself the Green Wanderer seems to have been kind enough to leave helpful notes around the land to aid you in your travels. Meanwhile, Conan the librarian (get it?) has lost a lot of books; he rewards you with gold coins for each one that you find.

There is also a bank to safely store your collected gold coins, which proves handy as losing a life during the game costs 10% of your currently held coins to resurrect. This system of banking your riches for safekeeping worked a treat in Hollow Knight, and it proves just as useful here. Another beneficial resident is the fortune teller, who will reveal a hint if you find yourself unsure where to head next. Each NPC has their own memorable traits, and the game’s dry sense of humour adds a sprinkling of life that is not always found on these lonesome adventures. One character for example, upon meeting our pixelated knight for the first time, declares: “You remind me of someone. Did you use to own a shovel?”

Enemy characters are rich in variety, with attack patterns and weaknesses that are worth learning. Initially they seem quite a pushover, especially as there seems to be an abundance of life hearts. But things soon escalate, and areas that have been visited before gain an increase in foes. Thankfully, our hero gains new combat and defensive equipment and skills, including those fantasy essentials of a shield and bow and arrow. An upgrade tree also allows the player to modify their character with bonus attributes for movement, combat, and magic use.

One of the first upgrades to become available is Telepathy, allowing the player to take control of a mysterious sidekick for a precious few seconds to reach activation switches that would otherwise be unreachable. This is one of several elements that allow access to more areas of the map, in classic Metroidvania fashion. Cathedral offers a familiar gaming landscape: treasure chests are rewarding, and spikes are painful. At times there are obvious hints of platform gaming influence; indeed, one region looks almost perfectly suited to the Mushroom Kingdom, with its bright colours and moving platforms requiring perfectly timed jumps.

About those jumps. There are some frustrating moments when a “blind jump” results in a loss of health. In addition, the game features scrolling areas and flick-screens, and on occasion the consequence of those flick-screens is a rather sudden collision with the opposition. Boss fights too can be ruthless in their challenge, until you realise the pattern of attack. None of these moments spoil the game, but all the same it can be frustrating to feel the test at hand is not always fairly pitched.

Decemberborn Interactive have rummaged through some of the finest treasure chests in the land to create a homage that draws upon many classic video games. This has resulted in an adventure that is lots of fun, but with little originality. There is a generous amount of territory to cover, and fans of the genre will surely enjoy the ride, even if it is a well-trodden path.

There may be little original content in this adventure, but Cathedral collates a lot of classic gaming principles to wrap them up successfully in a retro-inspired Metroidvania tale. There’s plenty of ground to explore. Can you handle one more knight?