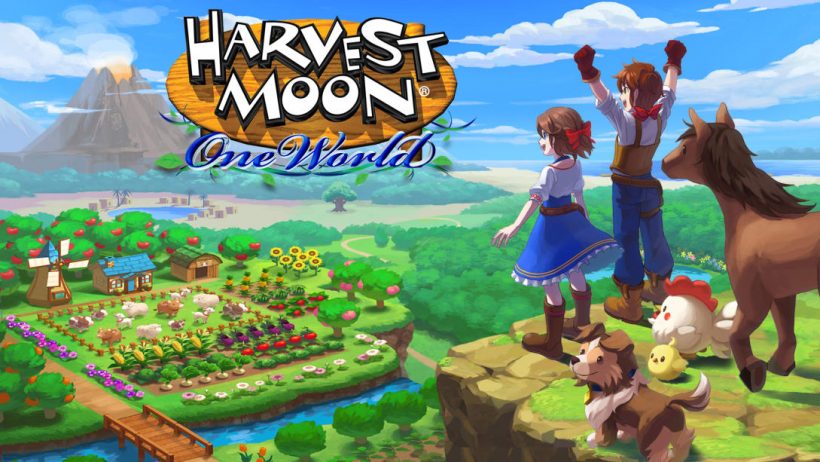 Harvest Moon first released for the SNES back in 1996, the love-child of Marvelous Entertainment and Natsume. Their subsequent children went out into the world of ever-evolving consoles to the delight of their parent’s pocketbooks. Until 2013, when Mommy-Marvelous and Daddy-Natsume decided to divorce.

Both parents still wanted to make little farming-sim children. Papa-Natsume owned the rights to the name Harvest Moon. Meanwhile, Mommy-Marvelous adopted the moniker Story of Seasons. Flash forward to today and Natsume is still popping ‘em out in this latest instalment, Harvest Moon: One World.

Thump! You close your well-read book as mom calls for you. Mother wants you to go forage potatoes for dinner. A frown fills your face: if only there were some other things to eat besides potatoes.

Outside, a glimmer of light catches your eye! You approach, and see a tiny creature in a pointy hat. It hands you a bag of seeds and disappears. Using the ancient and forgotten art of farming, you plant the precious seed. With hope in your heart, you fall asleep dreaming of something other than potatoes for dinner.

Thus begins Harvest Moon: One World. Like any other instalment of the series, you will grow crops and raise animals. However, One World has some interesting new mechanics.

The first, most notable difference is that your farm is mobile. After a brief tutorial, your young inventor friend gives you a squeezy ball that magically allows you to shrink, and thus transport, your farm.

Crops grow anywhere no matter the season but, depending on where you’re growing them, there’s a chance for different types to develop. For example, growing a tomato in a colder landscape can result in an ice-tomato.

What would a farming sim be without animal husbandry? One World delivers with your standard animals like cows, chickens, and horses, but you can also fill your barn with other fun fauna like camels and reindeer.

Each different area of the world is inhabited by people. However, there are only ever a few villagers of any importance. Other NPCs are simply referred to as “Troubled Man” or “Tired Woman”. If the developers couldn’t be bothered to give them names, how do they expect players to care about them?

The NPCs with names are mainly going to be romance options. Winning the heart of your chosen one will require giving them gifts and talking to them regularly, as per usual.

Graphically, the game is nothing mind-blowing. It’s the 3D Harvest Moon look we all know: colourful and cutesy. Each area is a different geographical location: desert, beach, grasslands, etc. The music is also quaint and delightful, with lots of happy violin medleys, and it changes depending on your location too.

So what’s done particularly well? You’re given (most of) your beginner tools, right at the start, for free. No scrounging for extra cash just to afford a brush. All your crops are obtained by interacting with harvest wisps as well, giving your pocketbook a break from seed-buying.

The mobile farm is a really neat mechanic, allowing players freedom to move around the map and settle wherever they like best. Eventually, an extremely helpful fast-travel mechanic is added as well.

What isn’t done so well? Time! The time moves ridiculously fast in this game. Time has always moved quickly in Harvest Moon, but in One World it feels even more sped up. With the sheer amount of places to go, it could have benefited from a slower pace.

The game feels very lacklustre at first, as things like festivals are unlocked by completing tasks. So it’s a very slow start, but dedicated players who stick it out will be rewarded with horse races and fishing competitions, and will have more to do throughout the years.

Simplicity: the game is almost too simple. The extreme popularity of Stardew Valley came not only from growing crops, but from getting to know the complex characters and helping them with their adult-issues.

One World is perhaps targeting very young gamers in that none of the characters feel very dynamic. The story is just as basic: humans abused nature in the past and now nothing but potatoes can grow, so it’s the player’s job to remind everyone how to properly care for nature. It’s a good message, but over simplified.

The game is not without some technical issues as well; after playing the game for several hours, I found that it would freeze for about 5-10 seconds while it struggled to load NPCs in conversations I was trying to have.

All in all, Harvest Moon: One World has a few good mechanics that add some spice to the genre, but the super simple story and one dimensional characters will not keep adult audiences engaged for very long. A good introduction to the farming sim genre for your little ones.

Harvest Moon: One World introduces the fun new mechanic of moving your farm around, and it’s made the controls quite smooth. However, the simplified story and static characters could have adult gamers losing interest quickly. A good game for younger audiences.